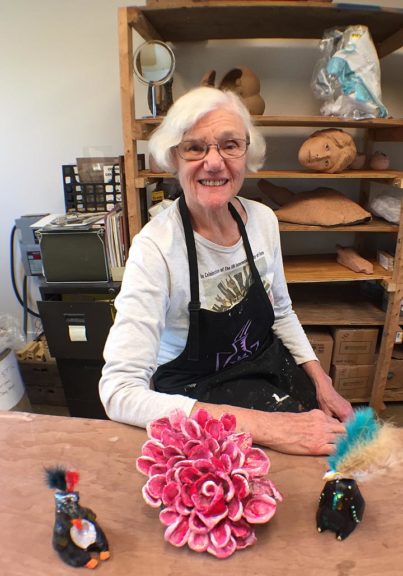 Local sculptor Alice Robrish recently showed off some of the work her art students at Dayton Correctional Institution created during a course she taught at the Dayton women’s prison. The lotus was made by Tyra Patterson, who was released in December 2017. (Photo by Carla Steiger)

This article is the first in a series detailing the work and volunteer efforts of Yellow Springers at Dayton Correctional Insititution.

Alice Robrish has a long history as both an artist and social justice activist.

In recent years the innovative sculptor — known for her figurative clay pieces that often incorporate natural materials — protested the police killing of John Crawford III at the Beavercreek Walmart and participated in the People’s Climate March in New York City. While a student at Oberlin College in the early 1960s, she worked at a nonprofit law firm researching the voter suppression of African Americans.
More recently, the issue of mass incarceration, as detailed in Michelle Alexander’s book “The New Jim Crow,” sparked a desire to become involved in prison work.

“I realized prison was a place I could put my clay teaching skills to work and where it would make a difference,” she said in a recent interview.

In 2014, she became a volunteer instructor of ceramics and sculpture at Dayton Correctional Institution, or DCI, a state women’s prison on the west side of Dayton.

Teaching there has been one of the most rewarding experiences of her life, Robrish said at a recent art program graduation ceremony at the prison.

“The art program gives the chance, while locked up, to find some internal freedom and meaning through making art,” Robrish said. “The intention to make, to create, to give of oneself is a powerful force for change.”

Robrish is one of a number of villagers who have been sharing their talents and time at DCI, which houses about 950 women, including some with life sentences and some under maximum security.

At DCI, villagers have taught art therapy and mindfulness courses, led choirs and music performances, contributed books for a library, advocated for inmates who have suffered from domestic violence and supported them as they re-enter society, among other activities.

Villager Cathy Roma, who has volunteered in Ohio prisons since 1993 and who now leads a choir at DCI, is impressed with the work of so many people in town “to bring humanizing healthy relationships to people who are often treated only as state property,” she wrote in an email this week.

Roma, whom Robrish knew through the local Quaker community, helped the sculptor make contact with the prison by pointing her in the direction of DCI’s now-retired assistant to the warden Vivian Stinson, who was at the time putting together an art therapy program. Robrish’s ceramics class was soon added to the mix of courses taught in 12-week sessions, which also included painting, drawing and photography.
Working with clay has long fascinated Robrish, and it has turned out to be an excellent medium for the women, she said. She has now taught more than 200 women at the prison.

“It’s very immediate. There is something about working with your hands with no tool such as a paintbrush between you and the material that gives a direct sensuous connection with the clay,” she said.
In Robrish’s classes, the hand-built sculptures are formed from self-hardening clay and after being dried, are painted. There are no kilns or pottery wheels at DCI.

Among other art projects, in her most recent session, Robrish and her incarcerated students created an astonishingly detailed two-story motel from a large rusty dog crate they named the “Human Trafficking Inn.” Using pieces of cardboard, fabric, paint and clay, they depicted gut-wrenching scenes in almost every room. In one, a man puts money on a table while a woman sits on a bed waiting. In another, a woman is being shot up with drugs as a child cowers under the stairs.

The vignettes reflect the fact that about half of the women in the prison have been trafficked, according to Robrish, and is one way for them to work through their traumatic experiences.

The art-making process also gives the women a sense of agency and helps them create meaning in their lives, Robrish said.

“There’s a hunger for some element of freedom in prison … a desire to create, to make something, to have control over some aspect of your life, and the art classes provide that,” she said.

Along with imparting artistic skills, Robrish’s courses also instill other life skills in her students.
“One of the key elements of the art therapy program is treating each other with respect,” Robrish said.
For instance, a safe environment in which to work is created by the incarcerated facilitators in partnership with Robrish. In the setting, the students learn to accept frustration while learning new techniques and gain enhanced confidence when they succeed, according to Robrish. They also learn the value of showing up, as good attendance earns them the privilege to continue attending the classes.
The value of the courses is clear to DCI’s activity therapist Charlsie Banks. She said the art therapy program at the prison helps the inmates feel they are “out of the fences of DCI” and are not institutionalized.

No guards loom over the inmates while in their art classes, and no one is telling them what to do, Banks added. Furthermore, the inmates get to express themselves, and the courses are a source of dignity and prestige.

At the end of each session there is a graduation ceremony with a festive meal, performances and brief speeches by the participants, and a silent art auction. The money raised by the auction of the women’s work benefits local charities such as the Artemis Center in Dayton, which provides support and information for victims of domestic violence and their children. Robrish usually walks away from the ceremonies with an armful of art that she has purchased from her students.

A history of art, teaching & activism
Teaching art classes at DCI has been an extension of Robrish’s longstanding creative pursuits. Much of her own art is classical figurative clay sculptures, primarily of women. She also creates work that deals with social issues.

“A number of my sculptures call forth the dignity and importance of women,” Robrish wrote in an email.
For instance, “Food for My Babes” is the portrait of an African woman, who for the first time has a job and can now feed her children. Another of her pieces, titled “Vision of Matthew Sheppard,” addresses bigotry and inequity. Constructed of handmade paper and old fencing, it remembers the young gay man who was tied to a fence, beaten and left to die in 1998 in Wyoming. The piece won the Best of Show Award at the 2016 exhibition of “The View,” a juried landscape show at Rosewood Gallery in Kettering.

In addition to the Rosewood Gallery, Robrish has shown her work locally at the Yellow Springs Arts Council and at the Springfield Museum of Art, among other venues. She also had a significant number of exhibitions in the Washington, D.C., area, where she lived before moving to Yellow Springs in 2004.
Although Robrish had an early joyous experience with clay at a neighbor’s house as a young child, her passion for art came later, when she was a young mother. At home with children, she started taking ceramics and other art classes near her home. She took every art course she could, and obtained a bachelor’s degree in studio art from the University of Maryland in 1981. Her earlier academic interest was in political science, in which she obtained a bachelor’s degree from Oberlin in 1962.

With her art degree in hand, she began teaching classes at first for children, and then adults, from her home studio in Bethesda, Md.

After moving to Yellow Springs, she taught ceramic and clay classes for both children and adults at the John Bryan Center. Robrish additionally taught a clay course for Project Jericho in Springfield that was designed for families needing supervised visitation activities for parents and their at-risk children who were in foster care. Using a hand-building technique, the participants constructed family totem poles, in which each family member created individual heads that were then stacked on a pole.

Robrish sees her work at the prison as helping the women to step out of their everyday life. Retired warden’s assistant Stinson sees this too. Robrish does more than just teach art, she said.

“[Her classes] provide a refreshing escape for the women as they create art under her tutelage,” Stinson said. “Alice’s exceptional talent far surpasses sculpture.”

* Steiger is a local artist and writer.