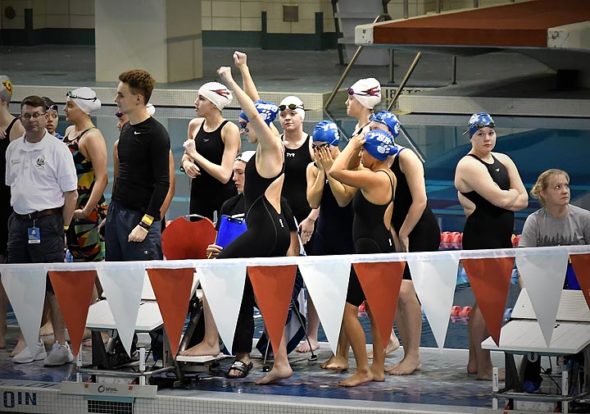 The Yellow Springs High School girls 400-meter freestyle relay squad of, from left, Eden Spriggs, Jude Meekin, Sara Zendlovitz, and Natalie Galarza prepped before their event at the district meet, held on Friday, Feb. 15, at Miami University. The team finished in 21st place. It was the fourth year in a row that YSHS qualified for that relay event. (Photo by Kathleen Galarza) 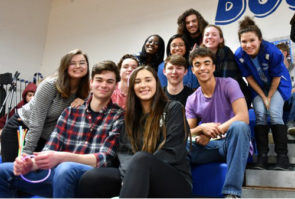 Winter sports athletes to be honored

Freshman Angie Smith, a standout this year on the girls varsity basketball team with 530 points for the season, has been named co-player of the year in the Metro Buckeye Conference, or MBC, in which she also was selected for First Team All District

Smith, who is expected to receive more awards this week, also achieved the 15th all-time ranking by the Ohio High School Athletic Association, or OHSAA, for successful free throws, at 190.

Aaliyah Longshaw, also a freshman, was named to the Second Team All Conference; and Haneefah Jones, a sophomore, received the MBC Sportsmanship Award.