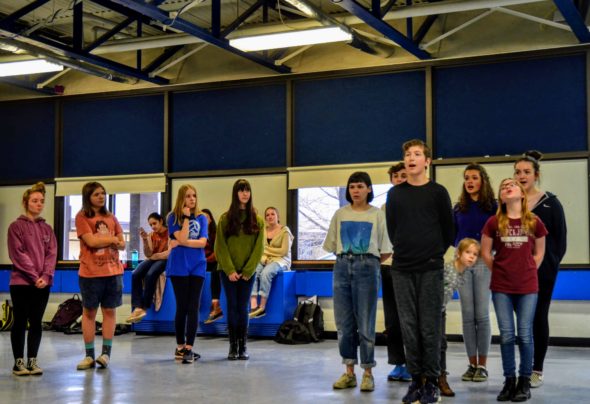 "So long, farewell..." The Von Trapp children serenaded party guests at a recent rehearsal for "The Sound of Music" at YSHS. The community is invited to attend an open rehearsal and sing along with their favorite tunes from the show on Saturday, March 2.

Sing with cast, band at open rehearsal for “The Sound of Music”

On Saturday, March 2, the Foundry Theater at Antioch College will be alive with singing in support of the YSHS/McKinney Theater Program. The YS community is invited to attend an open rehearsal at 7:30 p.m. — and, if so moved, to sing along with songs from the upcoming spring musical “The Sound of Music,” along with the YSHS/McKinney cast and Community Band.

All those attending are welcome (and encouraged) to wear their lederhosen and alpine hats as the cast and band rehearse select songs from the production and add their voices. Attending the rehearsal is free, and the event is open to all ages.

Donations will be accepted to help assist the Bulldog Theater students in attending the upcoming OHEDTA State Thespian conference with the productions of “Romeo and Juliet” and “Girls Like That;” both productions, which were performed in the fall, were selected for inclusion in the three-day conference, which more than 1,500 Ohio theater students will attend.

Concessions will be available at the rehearsal from the Theater Arts Association, the booster organization for Yellow Springs Bulldog Theater, to make sure all singers are properly hydrated as the cast rehearses such favorites as “Do-Re-Mi,” “Edelweiss” and “The Lonely Goatherd.”

“The Sound of Music” will be performed at the Foundry Theater on Fridays, Saturdays and Sundays, March 8–10 and 15–17. Tickets are available online at http://www.showtix4u.com/events/15352.