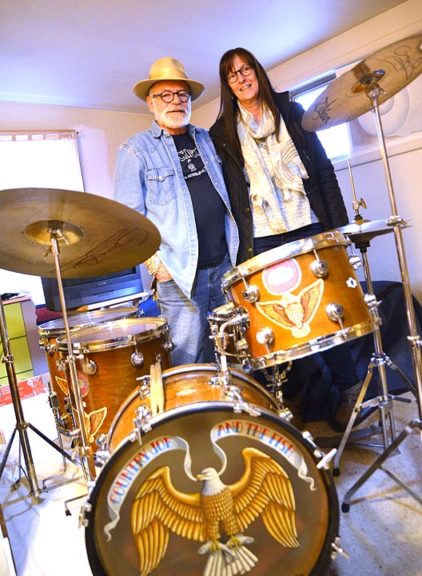 Duke Dewey and the drumset he used at Woodstock Music and Art Fair, where he performed with Country Joe and the Fish.

After heavy afternoon thunderstorms, the sky cleared as a 21-year-old Yellow Springs native took the stage at Woodstock on Aug. 17, 1969.

Long-haired and shirtless, Greg “Duke” Dewey sat behind his soaked drum set and played with his band, Country Joe and the Fish, to a crowd estimated at 400,000.

Fifty years later, Dewey recalls seeing the audience spilling over the horizon and being filled with the desire to play.

“There was incredible energy coming off of the audience,” Dewey said recently. “I never felt more compelled to play.”

And he remembers how wet everything was; the band had to put down plywood so they wouldn’t be electrocuted.

“The drum heads filled with water so every time I hit them it was like, splash!”

Dewey reflected on his experience last Friday while packing up the famed drum set before it was hauled back to Bethel, N.Y., the historic site of the Woodstock Music Festival, for a museum exhibition.

Dewey is loaning his drums for the special exhibit, “We Are Golden — Reflections on the 50th Anniversary of the Woodstock Festival and Aspirations for a Peaceful Future” at the Bethel Woods Center for the Arts.

Robin Green of the museum, who made the 10-hour trip to retrieve the drums, explained the exhibit’s purpose as to spark a conversation across the generations about peace and love.

Woodstock, remembered as nonviolent and communal, still has lessons for the present, Green believes.

“They were trying to symbolize peace, and to protest the Vietnam War,” she said. “We can all take something away from it.”

“I’m still hopeful for peace and that we can all live in harmony,” she added.

Dewey’s band offered one of the most direct anti-War messages of the concert with the tune, “I-Feel-Like-I’m-Fixin’-To-Die Rag,” with which they closed their set — “And it’s one, two, three, what are we fighting for/don’t ask me I don’t give a damn, next stop is Viet Nam.”

While drums were being dismantled and hauled off, Dewey folded up a pair of deer-skin pants he donned for the performance and is also loaning to the museum. The getup can be seen in the award-winning 1970 documentary, Woodstock, which features several shots of Dewey.

Except for a bell-bottom flair at the ends, the pants looked quite tight. After all, Dewey was just three years out of Bryan High School at the time. Asked in jest if he could still fit in them, Dewey shook his head and responded, “it fit like a glove back then!” As for the long hair, Dewey had only recently cut it, after keeping the look for decades. 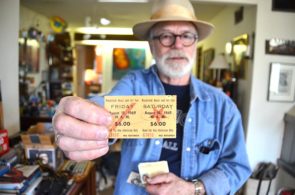 Duke Dewey and the drumset he used at Woodstock Music and Art Fair, where he performed with Country Joe and the Fish. Below: Dewey holds a ticket stub from the historic music festival. (Photo by Megan Bachman)

A counterculture artifact in their own right, the pants were custom made in Berkeley by the same person who made some of Bob Dylan’s clothes, according to Dewey. At the time of Woodstock, Dewey was living in the Bay Area and playing top bill at famous venues like The Fillmore.

A 1965 Bryan High grad, Dewey had recently gone out west with his band Mad River, an Antioch rock band that formed in 1966. But it wasn’t even Dewey’s first.

“When I was in high school, I played with four different Antioch bands,” Dewey recalled.

Dewey grew up overlooking the Antioch campus from faculty housing on Marshall Street. His father, George, taught writing at the college, including to Rod Serling, while his mother, Rae, was an educator who worked at the Fels Institute and was involved with the Antioch School. His brother, Nick, also became a rock musician.

While at Woodstock, Dewey mostly hung out with the other musicians at a hotel 20 miles away, from which they were shepherded back and forth in a military helicopter.

“It was a huge hotel party with every rock star you can imagine,” Dewey said. He painted a picture: Down at the bar you might see Marty Balin drinking with Keith Moon, or Janis Joplin playing cards with Jimi Hendrix.

“It went on for four days, 24 hours per day,” Dewey said of the nonstop party.

Dewey generously put up seven YSHS students who made the trip from Yellow Springs in his hotel room one day. Exhausted from the outdoor festival, they slept for eight hours straight, Dewey recalled.

Back at the concert site, Dewey was blown away witnessing the performance by The Band. And he remembers meeting folk signer Joan Baez at the free stage set up by the Merry Pranksters.

Along with Dewey’s drums, the exhibit will also include a guitar picked out by Jerry Garcia, the shirt worn on stage by Steve Night of Mountain and the bass guitar from Jefferson Airplane’s Jack Casady, which was recently recovered 47 years after it was stolen, according to Green.

Dewey’s drums, which he bought in 1967, feature on the kick drum a still gorgeous hand-painted version of Country Joe and the Fish’s logo. It was drawn by the same artist who detailed the album covers of the Youngbloods, which Dewey first saw perform at Antioch in 1965.

Listening to Dewey, one almost stops being surprised at the historic places he’s been and the legends he’s met; the threads of Dewey’s life are so entwined with the Sixties music scene. His home is a museum too, in a way, with concert posters in psychedelic script, and a framed gold vinyl record of the album produced from the Woodstock Music Festival.

Looking over the memorabilia and leafing through the albums spanning a half century, Dewey struggled to summarize such a career.

“I’ve made quite a few records,” he said.