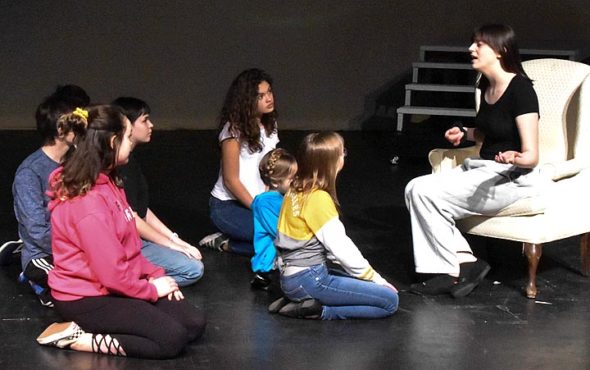 Maria (Julia Hoff) teaches the Von Trapps how to sing in "Do-Re-Mi" at a recent rehearsal. Many of the cast and crew for "The Sound of Music" have fallen ill this week, forcing the cancellation of all opening weekend shows. (Photo by Luciana Lieff)

UPDATE — ‘The Sound of Music’ canceled for Sunday, March 10

The opening performance of “The Sound of Music,” which had been pushed to Sunday, March 10, after a widespread illness in the middle and high schools, has now been canceled in favor of giving the play’s cast and crew adequate time to recuperate.

An announcement from YS Schools read: “Today finds more of our cast getting sick or growing sicker. In order to give our students time to rest and heal, the scheduled Sunday, March 10 performance of “The Sound of Music at 3:30 p.m. is canceled. The show will joyfully return this Thursday, March 14, at 7:30 p.m. Get well everyone!”

The updated dates and times for performances are as follows:

Those who held tickets for the March 10 show may contact jterrell@ysschools.org to secure tickets to the Sunday, March 17 show, or exchange them for tickets to another performance next week. Click here to buy tickets online.