Antioch College’s Earth Week—All are invited to ‘wade in’

A series of Earth Day-related events on the Antioch College campus next week  invites the entire community to “Wade In” on environmental justice, particularly in relationship to water.

“Wade In … invites action, connection and collaboration,” according to event organizers.

Activities will include a concert featuring the World House Choir and guest artists, a panel discussion by indigenous water protectors, an environmental justice teach-in, a community dinner, a documentary film screening and opportunities to volunteer.

At this time when the protection of water and the equitable access to water is at the heart of recent high-profile conflicts from Standing Rock Reservation, in the Dakotas, to the city of Flint, Mich., we have entered an era that environmental activist and scholar Joanna Macy calls “The Great Turning.”

“The most remarkable feature of this historical moment on Earth … is not that we are on the way to destroying the world — we’ve actually been on the way for quite a while. It is that we are beginning to wake up, as from a millennia-long sleep, to a whole new relationship to our world, to ourselves and each other.”

Roma said she was inspired by the quote while putting the concert together.

“There’s hope involved,” she said. “We’re more conscious of the earth and the earth’s needs.

The concert features works that both celebrate that awakening and serve as a call to action.

And that call to action is a central message of the spiritual “Wade in the Water,” from which the Earth Week series of events is named. 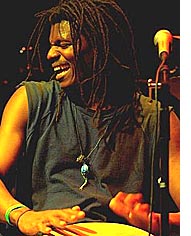 Baoku Moses will perform with the World House Choir in concert Monday, April 22, at 7 p.m., in the Foundry Theater, as part of Antioch College’s Earth Week events. (Submitted Photo)

The anchor of the April 22 concert performance, “Wade in the Water” is said to have been historically associated with Harriet Tubman and the Underground Railroad. In a note to choir members, Roma wrote that the spiritual was a code song for people of color escaping enslavement in the American South.

The power of the song — both literally and metaphorically — was brought home to Roma 25 years ago by Bernice Johnson Reagon, founder of the African-American vocal group Sweet Honey in the Rock.

After Monday’s opening concert, Tuesday’s events will begin at 10 a.m. with an environmental justice teach-in, led by Antioch faculty, at the Coretta Scott King Center, followed later in the day by an indigenous water protectors panel at 2 p.m. in Antioch’s Arts & Sciences Building. 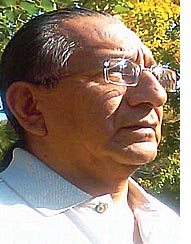 Panelists Tuesday afternoon include Corine Fairbanks (Oglala Lakota) and Guy Jones (Wakuwa la), both of Dayton, and Philip J. Yenyo, executive director of the Ohio affiliate of the American Indian Movement, of Cleveland. Skyping in remotely will be 19-year-old activist Nina Berglund (Oglala Lakota), of Minnesota, recognized as a “Youth Climate Intervenor.”

Antioch staff members of indigenous heritage who will also be present and leading the discussion include Jennifer Knickerbocker (Anishinaabe from White Earth Nation) and Shane Creepingbear (enrolled in the Kowa Tribe of Oklahoma). 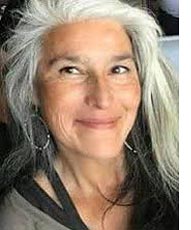 Fairbanks, who is an organizer with the American Indian Movement and a member of Women of All Red Nations, thinks the actions at Standing Rock, where water protectors challenged the construction of an oil pipeline across tribal lands, brought the issue of water protection to wider consciousness.

The issue, she noted in a recent telephone interview, has deep resonance for indigenous communities across the country. While she did not go to Standing Rock, she has experiences working with Dine’ elders in Arizona, where water “is being contaminated by fracking and mining,” and she spent many years in Southern California, where she said off-shore drilling threatens the ocean waters.

“Water protection has many tentacles and reaches out in many directions,” she said.

While she feels more non-native people are paying attention to issues of water protection, she often sees a difference in motivation and approach from that of native communities.

Native people, however, see “water as a being, a sacred being,” Fairbanks said. “We are all related” through the earth, she said.

A screening on Wednesday evening, April 24, of the 2017 documentary “What Lies Upstream” brings water safety issues close to home.

The film explores the causes and effects of the 2014 Elk River chemical spill in West Virginia, which left more than 300,000 people in nine counties with contaminated water.

One of the people interviewed in the film is Maya Nye, an Antioch grad, class of ’99, who will be on hand Wednesday to lead a discussion after the screening.

Nye, a native of Kanawha Valley, W.V., commonly referred to as “Chemical Valley,” is a founder and past president of People Concerned About Chemical Safety, in which she remains active. She also is currently pursuing a Ph.D. in occupational and public health sciences at the University of West Virginia.

In a phone interview this week, Nye said she began pursuing environmental studies as an undergraduate at Antioch, in a self-designed major combined with theater.

Environmental justice and security was — and remains — a personal issue for Nye.

“When I was 16, there was an explosion of a chemical facility a mile from my home,” she said. The chemical gas was the same that killed thousands in the Bhopal disaster in India in 1984.

“I could have died,” she said.

At the same time, her family — like others in her town — worked for the chemical companies. The companies remain one of the few sources of employment in the area, she said.

“There really weren’t other jobs.”

The economic aspect creates a complicated situation that can become contentious, not unlike coal mining debates.

“It’s something my community has dealt with my entire life,” she said. “People do need to put food on the table.”

She noted that the mission statement of the EPA in West Virginia includes “balancing economic impact” with environmental health and safety.

A system has been established that “makes it very difficult to create change,” she said.

Community-building activities, including a community dinner and hands-on volunteer projects, round out the week’s events on campus. Participants can assist with a “potato plant-o-rama” at the Antioch Farm, remove invasive weeds on campus or take part in a tree planting celebration at Weston Hall.

Organizers said the week of events is made possible by a grant from the Yellow Springs Community Foundation. All activities are free and open to the public.

The performance also will be livestreamed; for the link, go online to antiochcollege.edu/earth-week.

In addition to these events, Glen Helen, Antioch College’s 1,000-acre nature preserve, will be hosting several Earth Day-related events from April 26–28, including Poetry to Celebrate the Earth, Friday, April 26; a native plant seed swap and resource fair as well as a bird walk, Saturday, April 27; and the annual Earth Day 5K/10K and a Raptor Center Baby Shower, both Sunday, April 28. Some of the Glen events are not free; more information is available at glenhelen.org.