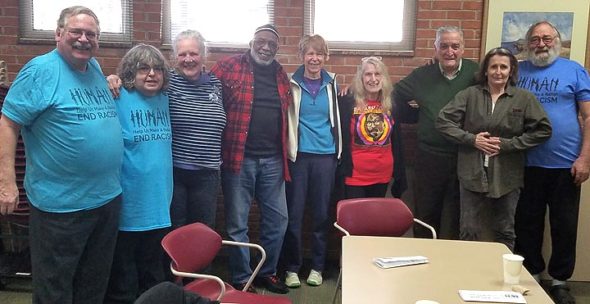 The social utopia of the ‘Mystic Knights’

It was during the late 1970s at an idyllic riverfront property in Clifton that a group of Yellow Springers came to form a legendary, diverse social club. Together, they played pickup softball and volleyball games, threw horseshoes, swam, boated and fished, ate barbecue and drank alcohol.

Calling themselves the Mystic Knights of Nowhere, the group of more than 100 people had membership cards and dues and met at what they called a “lodge.”

A more radical version of the 50s-era social club, they were multiracial and multi-generational. Eventually, they came to see themselves as a large family, according to former member Priscilla Moore recently.

“There was an incredible mixture of people from all levels of economy and races,” Moore recalled. “There were black people, white people, Indian people, mixed couples and children.”

But a racially charged run-in with county authorities ultimately led to the club’s end, while the resulting legal battle caught the attention of another rising group — the human rights organization Help Us Make a Nation, or H.U.M.A.N.

Organized a few years earlier by Antioch College professors Jim Dunn and Bill Chappelle, H.U.M.A.N. was a national anti-racist activist group rooted in the village. H.U.M.A.N’s members would travel across the country to protest against institutionalized racism and sexism, strategizing alongside several civil rights icons of the day.

This is the first of several articles exploring H.U.M.A.N. and its lasting local legacy. This article focuses on the Mystic Knights of Nowhere and its place in that group’s history. 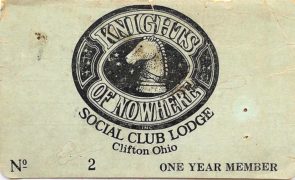 According to several former Knights, the gatherings at the Clifton “lodge” were welcoming to all, regardless of cultural, racial, sexual or class differences. Everyone was accepted.

For Neal Crandall, who grew up in town in the ’60s and ’70s, at the time of the  Knights there were still divisions between racial and economic groups, despite the reputation of the village as open and tolerant. But the Knights were different.

“I got to meet a whole bunch of folks I would not have otherwise met,” Crandall said recently. “They were from everywhere … they were all of us.”

The Knights were started by local residents who frequented Com’s Restaurant on Davis Street. On Sundays, they would gather at the trailer owned by Ellie “Gabby” Mason, the local barbecue chef who sometimes served food from his South Stafford Street home.

Farmer Jim Prether built a lodge on a 10-acre plot he owned along the Little Miami River on South River Road in Clifton, just down the road from Mason’s trailer. He rented it to the Knights in early 1978 and it became known as Prether’s Lodge.

In a 1979 commentary in the Yellow Springs News, Julie Monroe wrote that “being at the lodge meant volleyball, ponies for kids, horseshoes, a really fine tent for Gabby to cook in, and all the outdoor space they wanted … luncheons for Senior Citizens, big happy birthday parties for kids and dinner honoring union retirees.”

She added that, “most of all it was a place where all kinds of people congregated happily and without friction.”

The diverse gatherings are still memorable to Prether.

“I thoroughly enjoyed what was going on,” he said recently. “There were all types of people out there, black, white, mixed and others. Everybody got along so well. I never saw anything close to a fight going on.”

Donna Silvert, then a recent Antioch graduate and bartender at the lodge, remembers an idyllic scene.

“We all just felt comfortable with one another and we had fun,” she said. “It was like a little social utopia out there. I had never seen anything like it, the way people got along so well.”

Recreation was a significant aspect of the club. The name, Mystic Knights, came from a softball team started in the late ’60s and sponsored by Mason that played pickup games at Antioch and in Springfield. At Prether’s lodge, a crew of volunteer members crafted and cared for a regulation softball diamond free of charge.  Harold “Zip” Hamilton, a Village maintenance worker, was instrumental in installing the above-ground pool at the lodge.

Membership fees were only one dollar per year or five dollars for a lifetime membership, according to one version of its membership cards, which read, “The Mystic Knights of Nowhere Social Club Ranch. Food — Drinks — Games — Music.” On the back of the cards was Mason’s catchphrase, “It’s Nice to Be Nice — Try It,” which later was printed on T-shirts for club members.

To Prether, Mason was the heart of the social club. Prether recalls that he would cook for more than 100 at a time, but only take $1 per hour.

“He was the heart of the Knights,” Prether said. “He was very generous and brought out the best in people.”

Mason would later be the target of a county effort to shut down the club.

Implicating the ‘keeper of the house’

In the late ’70s, the lodge had caught the attention of Greene County authorities, who said at the time they had begun receiving complaints from neighbors, according to former Knights.

Moore believes that some conservative neighbors were bothered by the intermingling of races in their neighborhood. Mike Miller, another Knights member, believes he knows the reason for the crackdown.

“It all boiled down to one thing — racism,” he said.

A 1978 Labor Day weekend music festival seemed to have been the tipping point, according to Moore.

“That’s when the real trouble started,” she said. “We were not in Yellow Springs, we were in Greene County, and [Greene County] Sheriff [Russell] Bradley did not like us. They were sure that we were horrible people doing horrible things out there.”

According to Monroe in her News commentary, a state liquor agent joined the club undercover and, like others at the time, paid for their drinks by donation.

Soon after, on Oct. 1, 1978, the Greene County Sheriff’s deputies swept in and surrounded the lodge. They arrested six people for violating state liquor laws.

Silvert, who was a special education teacher in Dayton at the time, was one of those arrested. She remembers how county prosecutors leaned on her to implicate Mason as “keeper of the house,” a charge representing the organized illegal sale of alcohol.

“They really wanted to send Gabby to jail,” Silvert said.

Prosecutors threatened to have her teacher’s license revoked if she didn’t implicate Mason in the alleged violations, according to Silvert.

“They would call and leave messages at my job at the school, saying I had to be at the courthouse by a certain time,” Silvert said. “I felt like they were trying to intimidate me.”

Looking back, Silvert believes the Knights were targeted specifically because of the intermingling of black men and white women. Overall, the arrests and the threats of prosecution over activities that were widely known to take place all over the county, and without consequence, shook Silvert at the time, she said.

“I think it all came down to selective enforcement of the law,” she said. “I thought I was pretty well evolved at the time but after it all happened, I saw the reality, that this stuff really happens to people.”

The newly formed anti-racist group H.U.M.A.N. soon mobilized in support of those Knights in legal trouble.

Formed a few years earlier by Dunn and Chappelle, the group got wind of the ordeal and determined it to be a racist ploy, according to Victor Garcia, a colleague of the professors at Antioch. Further, the action played into the attitudes of more conservative residents of the county, and was tied to pleasing Sheriff Bradley’s supporters and voters, Garcia believes.

“Every spring of an election year Sheriff Bradley seemed to plan an incident such as a major drug bust or other event that would stir up his voters and bring them out to the polls in the fall,” Garcia said.

Dunn garnered support for the Knights and found those charged a capable civil rights attorney, James McNamara from Columbus.

H.U.M.A.N. also printed up a pamphlet that explained the club and its legal issues. Hundreds of copies were distributed around Xenia and elsewhere in the county to raise awareness of their case, Moore recalled.

The pamphlet stated that four defendants faced a total maximum fine of $33,000 and up to 16-and-a-half years in prison. In addition, it noted that it was appalling that “these people should face such serious consequences for misdemeanor offense, because we are an organization that Sheriff Bradley and several area trustees are openly hostile towards.”

The pamphlet also identified the likely racial motivation behind the charges.

Community members were urged to get involved in support of the Knights by writing letters of support to local newspapers, Greene County prosecutors Greg Lockhart and William Schenck, and to Xenia Municipal court judge Raymond Hieber, according to the pamphlet.

In a letter at the time to Judge Hieber and Greene County prosecuting attorney Mike DeWine that was also submitted to the News, Paul Eisenman wrote that the clampdown was a “blatantly selective and apparently malicious enforcement of a clearly selective law.”

“According to the law allegedly broken, people all over Greene County are criminals when they share some liquor with friends on a regular basis in their homes — not an uncommon practice,” Eisenman wrote in the letter.

During the jury selection process, a protest by Knights’ members and supporters took place outside the courthouse in Xenia. The trial never took place, however. According to several Knights members, McNamara had evidence that this was a case of “selective prosecution of the law” and it would turn into a major civil rights issue instead of a crackdown on a band of undesirables in the neighborhood. Today, Knights members believe that county officials did not want to bear the brunt of a highly publicized civil rights battle.

In the end, plea bargains were negotiated. Hefty fines were levied against those who had been arrested; Prether paid the fines. And the Mystic Knights of Nowhere disbanded.

But as a result of legal confrontation, several Knights members became politicized and went on to join H.U.M.A.N.

“We were not political people. We were living the politics of life,” Moore said. “Jim [Dunn] organized us.”

Many of the Knights began to attend what became known as the “floating coffeehouse” hosted biweekly by members of H.U.M.A.N.

The coffeehouses became a chief organizing strategy of Dunn’s, and the nature of them left an indelible mark on those who participated. Members of the Knights who began as participants in a lighthearted social club atmosphere were soon participating in human rights struggles in South Carolina, New Orleans and elsewhere.

The next article in this series will cover the founding of H.U.M.A.N. and its early efforts.

* Moyenda is an activist, poet and writer who grew up in the village. He can be reached at bomani54@yahoo.com.

*Megan Bachman contributed to this article.

2 Responses to “The social utopia of the ‘Mystic Knights’”