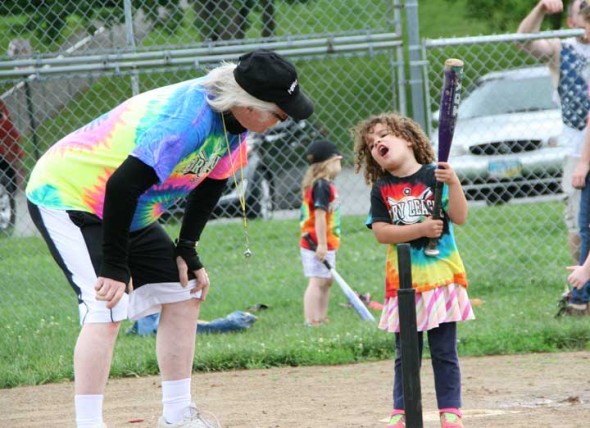 It’s nearly June — and that means it’s time for the Perry League, Yellow Springs’ all volunteer, 10-week T-ball program for all kids, 2–9 years of age. It’s the village’s non-competitive, beginner’s baseball program for all our community’s children regardless of their race, color, creed, sexual orientation, ethnicity, spiritual inclination or practice, ability or disability. And it’s free.

If you want to play, then come on out to Gaunt Park on June 7, the first Friday night of our 2019 season. We play every Friday night, 6:30 to 8 p.m., from June 7 to Aug. 9. We sell Perry League T-shirts, give every child a T-ball cap, and get their names and ages for our weekly T-ball stories in the YS News.

Every child is given the opportunity to bat, to hit the ball and run the bases; the opportunity to field the ball, to catch the balls hit off the tee, and throw them back to one of our many wonderful, happy and enthusiastic volunteers — who are both adults and caregivers and some of the kids themselves. A lot of our older kids love to throw balls out to the children in the infield after the child at bat has hit the ball off the tee.

We throw out nine or ten more balls after each kid bats, as a way to try and make sure every child gets a chance to catch a ball, a chance to field a ball and throw it back to the volunteer coach tossing those extra balls out in the first place — though, of course, the kids don’t always just throw the balls back.

Last summer Josie Noble, then 6, and his younger brother Keegan, then 4, were eager and animated fielders. They moved in close to me at the plate, coming within six feet of me, and then they fired the balls they had fielded at me as hard and as fast as they could. This “zing the coach” approach became quite popular as Desmond Truitt, then 5, Zach Fink, then 6, Corbin Hyatt, then 4, and Eden Larkowski, then 4, all closed in on me and then fired at will!

To you students of human nature, I ask you: What is this phenomenon? I am the coach, I am bigger than them, I am in charge, I love them, but when many of them get a ball in their hands and I am standing there asking them to throw it back to me, many are, on occasion, compelled to blast me. To blow me out of the water. To drill me. It is not mean. It is not malicious. But it is apparently a lot of fun. So, tell me, what is this urge?

I don’t know what it is, but that’s our Perry League. Please come on out and play some ball with us. We’ll be out there at Gaunt Park from 6:30 to 8 p.m. for 10 Friday nights, starting next Friday night, June 7, and we’d love to have you.