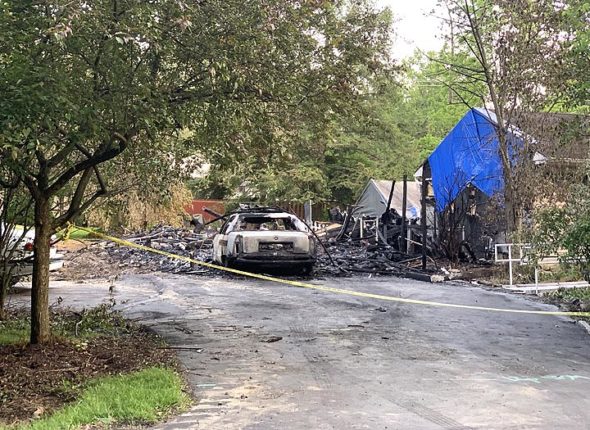 An early morning fire Tuesday, May 28, caused extensive damage to the home of Sonja and John Clark and sent the couple and a neighbor, Ransome Phelps, who rescued them from the house, to Soin Medical Center for treatment of burns sustained in the blaze. (Photo by Luciana Lieff)

Lightning was the likely cause of an early morning house fire Tuesday, May 28, that sent three Yellow Springs residents to the hospital, fire Chief Colin Altman said this week.

The blaze, at the home of John and Sonja Clark, on the northeast corner of  Fairfield Pike and North High Street, is still under investigation by the State Fire Marshal, but lightning associated with the severe storms that went through the area late Monday and early Tuesday appears to have been the culprit, Altman said.

The two residents and a neighbor who alerted them to the fire and helped get them out of the house were taken to Soin Medical Center with burns that were not life-threatening, Altman said. All three had been released by Wednesday morning, he added.

Altman said a 911 call to Greene County Central Dispatch at 2:02 a.m. Tuesday reported “flames showing” from the residence at 473 Fairfield Pike, on the western edge of the village.

The first fire unit was on the scene within five minutes, he said, adding that Miami Township Fire-Rescue already had multiple units out checking on damage from the night’s storms.

The fire appears to have originated in the detached garage and then spread to the house, the fire chief said. The garage and “more than one car” were completely destroyed. Radiant heat also melted the siding on a neighboring house, Altman said.

A neighbor is credited with saving the Clarks and their dog.

“He saw the flames, went in and got the couple out,” Altman said.

Yellow Springs native Ransome Phelps has been identified as the Good Samaritan.

In a phone call Wednesday morning, Phelps, 46, said he was still shaken up by the events two nights before, which left him with burns on his arms, legs, back and scalp.

He said he had been preparing for bed at his home on nearby North Stafford Street — after weathering the evening’s tornado warnings at the Bryan Center — when he saw a “weird, unnatural orange light” through a window.

He went out to investigate and found the fire on Fairfield.

Phelps doesn’t remember if he knocked on the front door first, or just pushed inside.

“They were sleeping,” he said of the Clarks, who are in their 70s.

Phelps said that Sonja Clark came out of her bedroom and told him that her husband needed a wheelchair and was in bed. He said he told her to get out of the house and call 911.

“Everything happened really fast and slow at the same time,” Phelps said.

He found John Clark, helped him into the wheelchair and pushed him out of the house and down the outside ramp.

“The heat was so intense,” Phelps said.

The ramp ended in the driveway, where a car was fully engulfed in flames. The heat from the burning car is what caused most of their burns, he said.

Mr. Clark’s reaction to the heat caused him to fall out of the wheelchair, and  Phelps physically pulled him to the road at the edge of the property, away from the burning vehicle.

“I didn’t know if the car was going to blow up, Phelps said.

He said a fire truck and ambulance arrived as they reached the road.

The Clark’s dog had followed them out of the house, but tried to go back in and had to be restrained by people on the scene, he said.

On Wednesday, Phelps said he was still grappling with the terror of the fire.

“I’m more emotionally messed up than anything,” he said, noting that his burns aren’t causing him much pain as yet.

Friends and neighbors are showing support.

“Jaimie Wilke [another neighbor] brought me groceries,” he said, adding, “I’m grateful to live in a town where people take care of each other.”

Wilke said it’s the least she could do.

Wilke said she had been asleep 20 to 30 minutes early Tuesday morning, after waiting out the night’s tornado warning in her basement, when she awoke to Sonja Clark yelling for help in the street.

Wilke said she went outside to assist as she could.

“It looked like the whole house was completely in flames,” she said, adding that she later learned the garage took the brunt of the blaze.

She also witnessed Phelps carrying John Clark, whom she described as 6 feet tall and paralyzed from the waist down, to safety.

She said Phelps, who is self-employed as a professional house painter, sustained significant burns that will need continuing care. She’s looking into resources that might be available for him as he heals.

Wilke also has taken in the Clarks’ dog, Piston, while the couple remain displaced from their home.

Wilke said she’s been neighbors with the Clarks for eight or nine years, during which time they’ve become friends.

“We got really attached to them,” she said of herself and her partner’s relationship with the couple.

Sonja, like Wilke, is trained in massage, and John “is a vintage car buff” who would play funk music while he tinkered on his vehicles.

The Clarks are currently staying in a motel.

Chief Altman said that the Red Cross had been contacted to help the couple in the aftermath of the fire.

The cost of damages from the fire had not been determined at press time.

In addition to Miami Township Fire-Rescue and YSPD, other departments dispatched to the fire Tuesday morning came from Cedarville, Xenia, Husted and Enon.