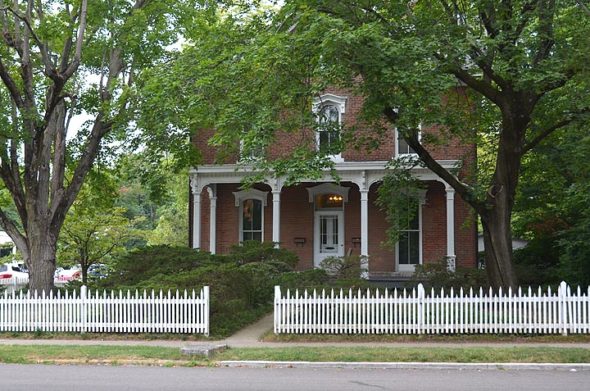 Villagers Dr. Esther and David Battle recently donated their multi-use historic building at 403 Xenia Ave. to Antioch College. The Battles have owned the building for more than 30 years, and seek to benefit Antioch College with the gift, which also includes a historic preservation conservation easement through Tecumseh Land Trust. Antioch plans to sell the property. (Photo by Audrey Hackett)

Villagers Dr. Esther and David Battle recently donated their historic downtown building at 403 Xenia Avenue to Antioch College. Esther Battle is a ’59 alumna of the college, and a longtime clinical psychologist. David Battle, a graphic designer, has served as art director of “The Antioch Review” since 1975, designing its iconic covers.

“We are so pleased to make a charitable gift that makes a substantial contribution to Antioch. We have a personal and emotional investment in the college,” Esther Battle said by phone this week.

Beyond their respective involvements with Antioch, Esther Battle described a family history with the college through her mother, one of the founders of the Fels Longitudinal Study, and her father, a professor of literature.

“The significance of the Battles’ thoughtful gift can’t be measured by monetary value alone, although it is most generous in that regard,” Manley wrote. “Its generational and local nature speaks to the deep, mutual relationships that Antioch College has inspired among its alumni and many Yellow Springs community supporters over the decades.”

The transfer was made on July 5, according to Greene County property records. The records show the sale price of the building as $420,000.

In announcing the gift last Friday, the college also announced its plans to sell the property.

As part of the donation agreement, Antioch and the Battles worked with Tecumseh Land Trust, or TLT, to secure an historic preservation conservation easement on the property. The easement will ensure that the multi-use building retains its historic facade.

“We’re pleased to be able to work with Tecumseh Land Trust on the building’s preservation,” David Battle said.

“Preservation was paramount,” Esther Battle agreed. “We wanted to contribute to the architectural character and excellence of Yellow Springs.”

“We’re delighted to be involved,” Magaw said of the new easement on 403 Xenia Ave. “This maintains the historic link in the chain in our downtown area.”

The property is already included in the National Register of Historic Places as part of the Yellow Springs Historic District, which covers a major portion of the village.

Built in 1875, the Italianate style building was originally the home of Antiochian James Madison Harris, class of 1870, and his wife, Jerusha Peacock Hall, according to Antioch College Archivist Scott Sanders. Harris, a physician, also located his medical practice in the building.

The Battles purchased the multi-use building more than 30 years ago from Tom Russell, a former dentist in town, and moved their respective practices into the space. Dr. Esther Battle has long run her clinical psychology practice in the front portion of the building, while David Battle’s design firm is located at the back on Limestone Street. While the Battles are currently the only occupants, the couple over the years has rented space to chiropractors, massage therapists, lawyers and other local businesspersons. By agreement with Antioch, the Battles will remain in the space for a year.

“It was hard for us to part with a building that we like so much,” Esther Battle said. “But we are both very happy to do this for the college.”