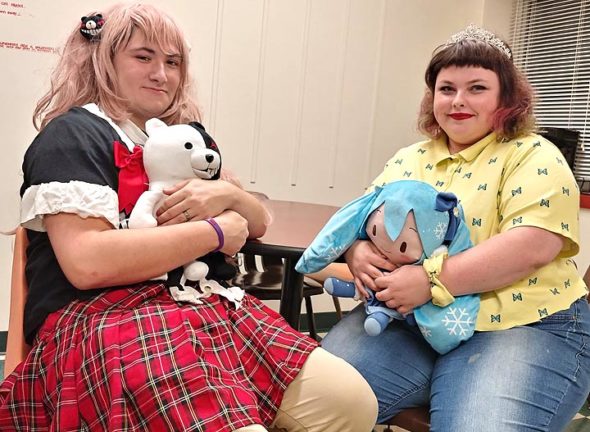 Chance Stillwell, class of ’23, at left, and Julia Hainzer, class of ’21, are co-founders of Anime Club at Antioch, one of five active clubs on campus. (Photo by Quinn Ritzhaupt)antioch

Clubs get students abuzz at Antioch

It’s the theme song of a television show coming from the cinema room of the Arts and Science Building, the laughter of women in the Coretta Scott King Center, or the noise of multiple sewing machines  whirring through open windows on campus. These are the lively sounds of student clubs at Antioch College.

Antioch has a centuries-long history of student-run endeavors, and with the first quarter of 2019 underway, more and more Independent Groups have begun popping up.

The topics of these Independent Groups, or IGs for short, are as unique as the students themselves. From Music Club to the Antioch Environmental Coalition, students and staff alike said they are excited at the prospect of starting and joining IGs.

Posters for various meetings line the halls in every building on campus, advertising and rallying for new members; oftentimes the talk over dinner in Birch Kitchens are upcoming events or fresh clubs, and everyone seems  to be buzzing.

There are currently five active clubs, many of which are run by proactive first years, including the likes of Anime Club and Sewing Club.

Clarence Allen, class of 2023 and head of Sewing Club, said over dinner that the group is still setting up, but he anticipates teaching sewing basics.

“We’ll be teaching how to hand and machine sew, as well as a few special days in which we’ll do patches, embroidery, things like that,” he said

Sewing Club plans on meeting four times throughout the week, according to Allen, who summarized the purpose of his club.

“It’s about teaching a skill and encouraging adaptability, all while making your own clothes,” he said.

Sewing Club marks the first IG dedicated to sewing and fashion in recent Antioch history, and many students are already involved and fully committed, helping Allen in his quest to broaden people’s skill sets.

Allen finished his interview with this reporter with a quote from Oscar Wilde:

“You can never be too overdressed or overeducated,” he said with a smile.

“We’re trying to bring the community together.” Stillwell said about the group excitedly. “Like, finding a common thread, something we can all enjoy.”

They meet twice a week in the Cinema Room to watch a few episodes of any given anime show, or anime movie, followed by discussion and suggestions. Stillwell said the club is  going well, and he is ecstatic to be co-president of it. They are also talking of going to state conventions, as well as a potential collaboration with Sewing Club to help with costume-making.

Some IGs are centered more on social justice, including Athina Peterson’s Women’s Group. Peterson is a third-year student at Antioch, and is focused on making an inclusive space for women and, in her words, “anyone with feminine energy.”

The purpose is to empower and uplift women, dismantle misogyny, and create a safe haven for any student who may find it helpful, Peterson added. She’s not interested in a divided group, but rather a gathering of people who can share their own personal stories as female or femininely aligned.

Meetings are slated to be once a week and meetings will be in the Coretta Scott King Center.

Peterson said she wasn’t sure whether or not there were women’s groups at Antioch in the past, but that in recent years there has been no ongoing organization. She wants to change that.

“I want it to live on through other students when I graduate,” Peterson said.

In fact, Antioch College has a rich history of women’s groups, according to Antioch archivist Scott Sanders of Antiochiana, starting in the early 1970s with the Women’s Liberation movement on campus. In 1977, the name was changed to Women’s Center, then slightly altered to Womyn’s Center in the 1980s. They initiated and proposed the sexual offense prevention policy, or SOPP, and ran until the college’s close in 2008. However, Peterson’s group is the first women’s group since the college reopened in 2011.

Much like the Women’s Group, many clubs on campus have their own historical counterparts. The Antioch Environmental Coalition finds its roots in the ’80s with the Antioch Greens, and Anime Club is reminiscent of the long-running Antioch Motion Picture Arts Committee (1937–1995) that focused on watching and renting films, followed by discussion.

In a search of Antiochiana’s archives, a few strange ones popped up as well, like 1926’s Fool’s Morgue, an honor society, and the Anarchist Youth Foundation of the early ’90s.

But the process of making an Independent Group has changed very little in the past century. Students must first come up with a concept, then take their ideas to Community Council — an elected group of students and faculty that addresses and represents the Antioch Community — to get it passed. It starts with a form that the main facilitator or facilitators of the IG must fill out and return to ComCil for approval.

Once approved, they work with the Space Coordinator to find the most ideal room and time for meetings. Then, IGs have the option to apply for funding, money which can be used for snacks, along with other supplies and trips to surrounding cities.

As for the leaders of the IGs, they all agree on one thing: the hope that their club will bring the student body together, unified in safe and fun spaces.

*The writer is an Antioch College student and freelance reporter for the News.