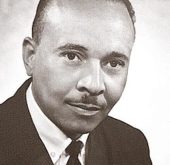 Buster was a star basketball player at Bryan High School in 1945, in the position of point guard. He had the highest average points in the season. Later in life, his jersey was retired at Yellow Springs High, but he played basketball well into his 60s!

He played for the All-Army team in basketball, traveling with the team and playing other service teams in the U.S.

He worked as a civil servant, and later managed the coffee shop at Antioch College, and when his father, Kenneth James Hamilton, Sr. passed away, Buster took over as manager of the Antioch Inn. He then moved to Dayton, where he began working for Metropolitan Life and later transferred to San Diego.

Mr. Hamilton is survived by his wife of 55 years, Priscilla Anne Hamilton, of San Diego, Calif., his sister Nina Anthony, of Columbus and his brother William Levi Hamilton, of Englewood, NJ.

Buster was laid to rest at Glen Abbey Mortuary in Bonita, Calif. Please visit his memorial at: http://www.glenabbeysandiego.com. Through this site, we invite you to share your thoughts and fond memories with our family.