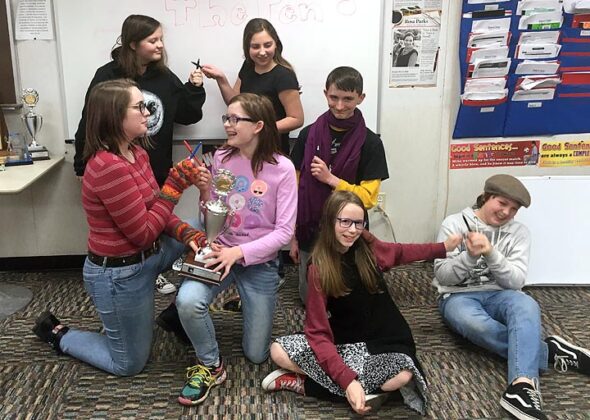 At practice last month, the McKinney Middle School Power of the Pen team demonstrated how the pen can be mightier than the sword. From left, top row: Lydia Palm, Katie Quigley, Conor Anderson; bottom row: Sydney Roberts, Tiger Collins, Helen Bales and Evan Galarza. Not pictured is Cole Oberg. Collins holds the seventh-grade team’s first-place district trophy. Most of the team is headed to regionals on March 14. (Photo by Phillip Diamond)

An elderly cat fights for its life in a forest. A boy comes out of his shell to reveal his true feelings. A girl who loses to her best friend in the National Geographic Bee handles the aftermath.

Those are a few of the stories that earned the McKinney Middle School Power of the Pen writers awards at the district tournament in January.

Now, most of the team is headed to Western Regional Tournament, to be held Saturday, March 14, at Wittenberg University’s Weaver Chapel. Spectators are welcome.

At districts on Jan. 11, the team quickly asserted itself as one of the area’s strongest. Nearly all YS writers qualified for the regional round of competition, despite the fact that only about 50% of all writers in the tournament advance to regionals.

In addition to numerous individual accolades, the seventh-grade team came in first place overall, out of 16 teams. Four of its writers finished in the top 15 out of 77 seventh-grade writers. Cole Oberg, Evan Galarza, Lydia Palm and Tiger Collins placed third, eighth, 10th and 12th, respectively at the tournament.

But the awards didn’t end there. Oberg and eighth-grader Conor Anderson received “best in round” awards, meaning their stories were selected as the best out of all other writers in their grade in one round of competition (there were three rounds total). And a few days after the tournament, Tiger Collins received a “Director’s Choice” award, which recognizes exceptionally written stories that weren’t awarded at the tournament itself.

McKinney Power of the Pen — PoP for short — has a history of success against middle schools that are often much larger.

When asked about their consistent prowess, Galarza touted the team’s creativity: “You could take a very generic prompt, one that you could write a generic story about, and every single writer here could turn it into something that you wouldn’t see every day.”

Bales said that the supportive culture of the team allows them all to collectively improve. If a writer is struggling, she explained, “there’s always another person to help them keep going.”

Targeted coaching also factors into the team’s success. The coaches, English teacher Jaime Adoff and retired English teacher Aurelia Blake, cultivate a spirit of creativity and inspiration in the team’s biweekly practices, something that sets them apart from other schools, students said.

“They’re coached not to go cliché,” Blake explained. “In the beginning it’s kind of acceptable, but then we start zeroing in.”

At districts, writers wrote about a wide variety of topics. In her story, “Quite a Tale,” Bales chronicled the journey of an elderly cat who went into the forest trying to catch a squirrel, but ended up battling a fox and escaping to safety. For his, Oberg wrote about a boy who mistakenly attacks his best friend, and his successful efforts to apologize and reconnect. Anderson’s story, “Roger Tallis Has a Girlfriend,” described a boy coming out of his shell to reveal his crush on a girl, who reciprocates his feelings. And Collins’ tale, “Forgiven,” revealed how a girl who loses the National Geographic Bee to her best friend handles the aftermath.

In addition, local writers are taught how to interpret prompts from abstract angles, with the goal of writing a story that surprises the judges with its originality, students explained.

When asked about the most important aspect of a story, Anderson suggested originality.

“I try to write a story that I know no one else will write, and that can lead to some pretty interesting stuff,” he said.

Bales referenced the message a story conveys as another crucial aspect.

“A good story has a good message — well, it can be a bad message — but it should be a strong message,” she said.

Then comes the most important aspect of PoP practices: feedback and critique. As Anderson described, “usually teams just take like 40 minutes per practice to write a story… they just practice writing, and don’t get any feedback on it.”

That’s not the case for the McKinney team. With two 90-minute practices each week, they have ample time to write thorough and creative stories, share them with one another and receive constructive feedback.

Practices are filled with mirth as team members celebrate their shared love of creative writing, but are followed by periods of heavy, focused silence.

During writing time, each student focuses intently on the prompt. They have 40 minutes to construct a setting, an entire plot arc and individual characters from 5- to 20-word prompts. And as the stakes get higher, time gets shorter: some competitors at the state competition have a mere 25 minutes to write a complete story.

To manage the time effectively, the Power of the Penners have been coached to only write stories that take place in a very small amount of time. This allots more time for them to delve into descriptive detail, intricately hashing out an imaginary scene of their own creation.

Each writer has their own individual story for how they ended up in PoP. Oberg decided to join PoP after realizing that it was “one of the few extracurriculars that would help me improve something I would actually use throughout my entire life.”

Galarza followed in the footsteps of his sister, Natalie, who was on the team four years before him. His favorite facet of PoP is the non-athletic competitiveness, explaining that when it comes to competition in general, “sports usually dominate in the recognition… it’s a good thing that [activities] that aren’t sports are receiving recognition.”

It was simple to Bales: “I heard about it last year… I was like, I like to write. I want to do that. So, I did that.”

They did that. Exceptionally.

*Diamond is a Yellow Springs High School senior interning with the News.