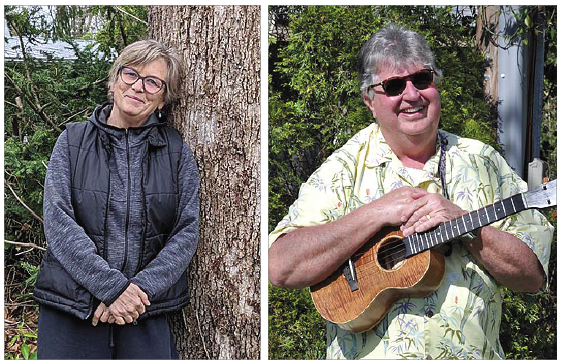 Local artists are adapting in various ways to the coronavirus pandemic. Performer and educator Louise Smith is “in process” with a performative response to trees, amng other works, while ukulele player Chris Murphy is enjoying playing over Zoom each night with enthusiasts from around the world. (photos by Chandra Jones-Graham, left, and Audrey Hackett)

Amid pandemic, art is a gift

An artist’s life is filled with ups and downs. Ideas come and go. People respond to your work, or not. Opportunities to create and share art come flooding in, or suddenly seem hard to come by. And making a living as an artist is tough, even in the best of times.

Enter the coronavirus pandemic, massive job losses and the new realities of lockdown.

Which is not to say it’s automatic or easy.

“We can put pressure on ourselves as artists to be productive, to respond,” Louise Smith reflected recently.

A writer, performer, therapist and educator who teaches at Antioch College, Smith said that she has fewer demands on her time — but more uncertainty and anxiety. Life during lockdown feels at once dire and “hyper-mundane,” she observed.

The News recently spoke with several local artists about how they were adapting and responding to life amid the pandemic. All are getting their bearings. Some are shifting their art in response to the crisis. And some are finding new ways to collaborate, even celebrate, in an altered world.

‘The losses are real’

In recent weeks, Smith has started her daily writing practice with a number — the number of deaths from the coronavirus. Once small, the number has grown heartbreakingly high.

Added to the big grief of those deaths are the smaller sorrows she calls “ambiguous griefs” — projects lost or canceled because of the pandemic. The day Smith spoke to the News, she was supposed to have been performing her one-woman show, “Dorothy Lane,” at the Dayton Metro Library. Other projects, too, have been scrapped or postponed.

“I’m a little at sea as an artist right now,” she said.

Smith also has had to adapt her teaching plans for the spring term. Rather than teaching a production class as scheduled, she is offering a timely documentary-based performance course that examines how artists respond to historical events using materials such as interviews and news transcripts. Students are being asked to craft their own performative response to the coronavirus crisis. The class is meeting online — a challenge for a performer who emphasizes breath and the body.

“This embodied practice is on the screen,” she said, with a laugh.

One touchstone for the course — and a personal touchstone for Smith at this time — is the work of AIDS activist groups from the 1980s such as Act Up.

“I keep going back to Act Up and their message of ‘Silence equals death,’” she said.

In her own work, she is still finding her way. She previously had an idea for a solo piece about a tree. As sentinels, witnesses and potent reminders of the sacredness of life, trees hold meaning and value for Smith. These qualities have an added poignance and depth amid the pandemic, she said.

“I feel like the piece is going to be informed by this time,” she said.

But Smith is also allowing herself to work through her feelings and give her art time.

Every night at 8 p.m., Chris Murphy breaks out his ukulele. He’s joined by uke players from as far away as California, Hawaii and Australia. Their jam is virtual — over Zoom — but no less lively for being hosted by an online platform that most of us, until a month ago, had never heard of.

Until the coronavirus hit Ohio last month and in-person anything became an impossible dream, Murphy was playing with two local groups he helped start, the YS Hootenanny and the YS Ukulele Club. Meetings of both are canceled for the foreseeable future, and neither group is meeting online — though members stay in touch by email, text and phone.

But uke players in particular are unstoppable, according to Murphy; groups like the Ukulele World Congress, an annual gathering in Indiana, and the Ohio Ukulele Campout, another annual festival, are holding daily or even twice-daily jamborees, all online.

“You cannot not have an opportunity to play the uke with people,” he said.

The technology that supports all this is good, but far from flawless. It’s almost impossible to actually play together over Zoom, so musical gatherings are formatted as open mic sessions, Murphy explained.

“We take turns playing for each other,” he said.

Virtual music-making is satisfying, but Murphy misses the magic of musicians playing together in the same room. The YS Hootenanny had been meeting monthly for at least seven years, with as many as 30 people crammed into its current space at the Yellow Springs Arts Council.

“I really miss the people themselves,” he said.

He’s confident that the group will reconvene after the pandemic subsides. Despite musical losses including, recently, the COVID-19 death of legendary singer-songwriter John Prine, joy and the urge to sing together will return.

Moriel Rothman-Zecher was finishing the third draft of his new novel last month when the coronavirus hit Ohio. The draft was due into his publisher April 1.

He made the deadline. And as he revised the novel in the waning days of March, he discovered a pull within himself toward a new ending. One more hopeful than catastrophic.

“There was a note of catastrophe on which the book ended,” Rothman-Zecher said. “The new draft ends on a note of hope that didn’t exist before.”

And while his novel has nothing to do with current events, he believes the present moment deepens and amplifies the book’s themes, which include decency in catastrophe, solidarity and friendship set against narrow self-interest and how to step outside the boundaries of self.

For Rothman-Zecher, the shifts brought about by the pandemic are economic as well as artistic.

The author of one previous novel, the critically acclaimed “Sadness Is a White Bird,” he is also a poet and nonfiction writer. As a full-time working artist, Rothman-Zecher has experienced rapid income loss as workshops and lectures he was scheduled to teach were canceled.

“Most of the gigs I’d lined up were canceled in the span of a few days,” he said.

He applied for, and received, a modest emergency grant from the Authors League Fund, and is seeking other forms of economic relief geared to artists. But he worries about how arts funding will fare over the longer term amid the sustained economic downturn that seems likely to follow the pandemic.

“There’s so much unsureness for people in the arts, especially in the early or middle stages of their career,” he said.

Yet his sense of artistic vocation has been strengthened by the crisis. Far from being “frivolous or irrelevant,” writing feels deeply important at this time, and his own writing seems to him the best contribution he can make.

“Art is about the pared-down questions of existence — death, love, human interaction,” he said. “I’m not sure what there is that I have to offer that’s more essential.”

Art as a gift

Forest Bright is a visual artist who makes abstract drawings, some of them in collaboration with his young son. For the past several years, he’s taught at Antioch College. And during that time, one of his favorite classes to teach has been a collaborative art course.

Collaborative art, also called social practice or participatory art, involves the audience in a new way. Rather than making something for other people, artists who engage in collaborative art make art with them, Bright explained.

This spring, with the closure of the Antioch campus due to the pandemic, the course has gone online. And with that change has come another. Rather than confine the course to Antioch students, Bright is opening it up to the broader community. Anyone who wants to contribute work in response to Bright’s weekly assignments can do so.

“It seems more interesting than our little insulated class,” he said of the change. “I hope we get really different works.”

The course is partially modeled on a collaborative art project called Learning to Love You More, which for seven years in the early 2000s invited people to complete quirky assignments such as “make a field guide to your yard” or “draw a constellation from someone’s freckles.” Thousands of people did, and the results were posted to the website learningtoloveyoumore.com.

“They were great assignments, simple but with a deeper meaning,” Bright said.

Included in Bright’s course this spring is an assignment to “make an encouraging banner,” drawn from the Learning to Love You More archive.

Community members who want to participate can view the course assignments at wishwecouldbetogether.com. Choose an assignment, complete it and send a photograph of the result to Bright at fbright@antiochcollege.edu. He’ll post it to the course website.

And community members can read along with the class, including chapters from “The Gift,” Lewis Hyde’s classic 1983 book about art and artists. Following Hyde, Bright believes that art is a gift — an offering to someone, or even just to yourself.

While disasters may seem to breed fear and selfishness, writers such as Rebecca Solnit have explored how they equally give rise to human solidarity and love. Collaborative art can be a way to express this, and keep the unity going, according to Bright.

“That moment of caring for each other — how do we extend it?” he asked.

4 Responses to “Amid pandemic, art is a gift”