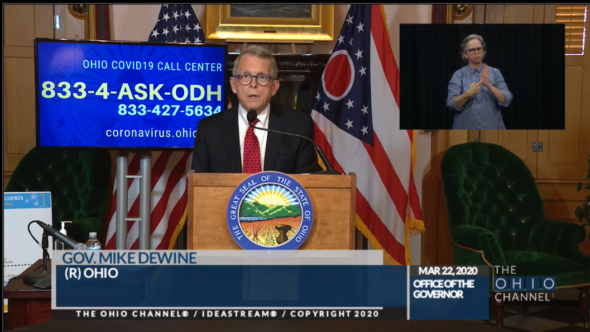 EDITOR’S NOTE: The News is making all of its coverage on the COVID-19 crisis free and immediately available to the community. To support our work, please consider a subscription today. Click here to subscribe now.

Ohio primary voters have just a few weeks left to vote — by mail — in the extended primary election.

New rules for voting were passed by the Ohio Legislature earlier this month as part of HB 197 and signed into law by Gov. Mike DeWine on Friday. The rules followed the last-minute closure of polls on election eve by emergency health order amid the COVID-19 pandemic.

While not without controversy or legal challenge, the new rules extend voting to April 28 via absentee ballot only. Those who voted prior to March 17 should not vote again — their vote will count. Those who requested absentee ballots during the days of uncertainty following the postponed election may have already received an absentee ballot, or will soon receive one, and should proceed with voting. Local boards of elections, while closed to in-person service, reopened this Monday to process requests and ballots.

The new rules take the place of a previous directive issued by Secretary of State Frank LaRose following the emergency poll closure. That directive extended absentee voting to May 26 and shifted in-person voting to June 2. Under Ohio law, however, the Secretary of State does not have the power to set elections, a point that LaRose acknowledged in a March 21 letter to lawmakers.

“I respect that only the legislature has the authority to change the date of an election,” he wrote, arguing that the June 2 date was an extension of the March 17 election, not a new date.

Under the new rules, there will be almost no in-person voting. Only individuals with disabilities and those without a mailing address may vote in person on April 28 at their local boards of elections. All other voters must vote by absentee ballot.

Additionally, only people who registered to vote by the Feb. 18 voter registration deadline are eligible to vote in the extended primary election. Voting rights groups have criticized that and other aspects of the new voting rules. In the latest legal development, the League of Women Voters of Ohio and others filed a lawsuit in federal court on Monday challenging the new rules.

Regardless of the outcome of that and potentially other legal challenges, eligible voters who have not yet voted should do so.

How do I vote absentee?

Voting by absentee ballot is new to many Ohioans. The process was previously reserved for those out of town and unable to get to the polls on election day, but Ohio law changed beginning with the 2006 primary, making absentee voting available to any voter who wished to vote in that manner.

Absentee ballots now make up between 14% and 17% of the primary vote in Ohio, and up to 34% of the general election vote during presidential years, according to a Feb. 20 analysis from Cleveland.com.

Absentee voting is a multi-part process in Ohio. Voters must first request an absentee ballot. Then, when that application is processed and approved, they will receive an absentee ballot in the mail that they must fill out and return to their local board of elections.

Absentee ballot applications can be obtained as an insert in this newspaper (45387 only), at VoteOhio.org or, locally, at the Greene County Board of Elections website, co.greene.oh.us/128/Board-of-Elections and at Tom’s Market. Fill it out online, print it, sign it and mail the application to the Greene County Board of Elections at 551 Ledbetter St., Xenia, OH 45385. Note that the “election date” remains March 17, 2020, although Ohio has said that applications with incorrect election dates will still be processed.

Alternatively, voters can write a letter requesting an absentee ballot. That letter must include the following information: name, address, address to send the ballot if different from home address, telephone number, birth date, Ohio driver’s license number or the last four digits of your Social Security number, election for which you are requesting a ballot (continue to use “March 17, 2020” for the extended primary election), party affiliation (Democratic, Republican or issues only), a statement that you are a qualified voter and the voter’s signature.

Request letters should be mailed to Greene County Board of Elections, 551 Ledbetter Road, Xenia, OH 45385.

Voters unable to access the internet or print out and mail a letter may request an absentee ballot by phone. Locally, voters may call the Greene County Board of Elections at 937-562-6170. While currently closed for in-person service, the election board is open for calls Monday through Friday, 8 a.m. to 4:30 p.m.

The deadline to request an absentee ballot for most voters is April 25 at noon.

Once absentee ballot requests are processed and approved by the elections board, voters will receive their absentee ballot in the mail, together with a return envelope with prepaid postage. They should mark the ballot with their votes, then return their voted ballot to Greene County Board of Elections.

Absentee ballots must be postmarked by April 27, or dropped off to the elections board by 7:30 p.m. on April 28. There is a secure drop box outside the Greene County Board of Elections for this purpose.

Addressing concerns that the coronavirus might be spread by handling paper, VoteOhio.gov says this: “The experts at the Ohio Department of Health have said that COVID-19 doesn’t spread by penetrating the skin on your hands, but only leads to infection when it is transferred from your hand to places like your mouth, nose, or eyes. Given that, the best measure you can take to prevent the spread of germs is washing your hands after handling mail and even cash.”

More information about how to vote in the extended primary is available at VoteOhio.gov, where voters can also download forms, check their voter registration status and, once they’ve voted, track their ballot online.

Ohio will be sending out postcards directing eligible voters to vote by absentee ballot. However, voters may not receive these postcards until mid-April, so voting rights groups are urging Ohioans to vote now.

While the new voting rules allow the suspended primary to move forward, not all groups in the state are happy with the specifics of the process.

A lawsuit filed in Ohio’s southern district court on Monday challenges many aspects of the new rules.

“Ohio has imposed a new set of rules for its 2020 primary election that will disenfranchise voters on a staggering scale as they contend with the COVID-19 pandemic,” the opening of the lawsuit reads.

The suit is being filed by the League of Women Voters of Ohio, the Ohio chapter of the Philip A. Randolph Institute and four individual plaintiffs. It criticizes the new rules, saying they violate federal voter registration law by not extending the voter registration deadline; for imposing a burdensome vote-by-mail process; and for denying those who face obstacles in voting by mail (other than the disabled or those without a home address) the opportunity to vote in-person.

The suit also notes that the Ohio system “is likely to have a disproportionate impact on Black and brown voters and young people.” That’s because these groups were twice as likely as older, white voters to have their mail-in ballots rejected in Florida’s 2012 and 2016 presidential elections, the suit asserts.

The prior directive by Secretary LaRose also drew a legal challenge. Voting rights groups sent a letter to LaRose on March 18 notifying him that his directive extending primary voting violated the National Voter Registration Act, or NVRA, by not also extending the voter registration deadline. The NVRA requires that states set the voter registration date for federal elections no more than 30 days prior to the election.

Additionally, the Ohio Democratic Party on March 17 filed a lawsuit with the Ohio Supreme Court challenging LaRose’s authority and jurisdiction to shift the elections and criticizing aspects of his plan. That lawsuit argued for mail-in voting on a shorter time frame, similar to the plan passed by legislators last week. The lawsuit has been dismissed at the request of the Democratic party.