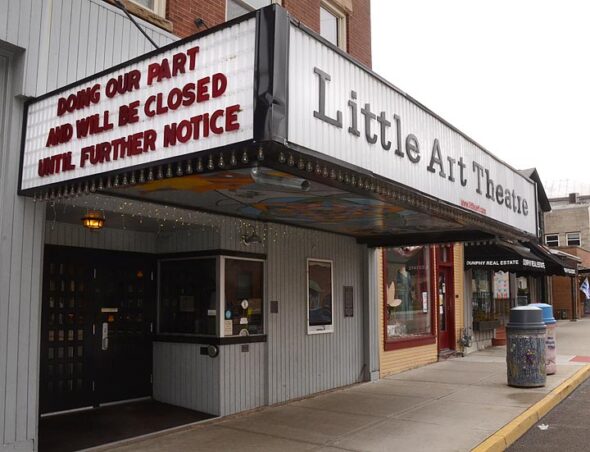 Over the the last month, many downtown shops closed or changed their operations to help slow the spread of COVID-19. (Photo by Matt Minde)

When Ohio Gov. Mike DeWine mandated that all elective surgeries be suspended on March 17, Jillian Marshall, a nurse at Ohio Valley Surgical Hospital, figured that she’d better start lining up her work documentation, anticipating the hospital’s closure. She turned out to be right, and for the first time in her life, filed for unemployment.

Her issues began when she received a notification in her online file that further information was needed. She was told she couldn’t solve the conflict via the website, so Marshall had to call the Ohio Department of Job and Family Services customer service line, which she said was “a bit like spinning the wheel on ‘The Price Is Right.’”

“I would call three or four times a day, in the morning and evening, when I’m sure many other people were trying to get through,” she said.

After two weeks of calling — and taking deep breaths and walks around the block — she finally got through and the issue was resolved.

Though she was relieved to have made contact, she was disheartened by the amount of money she was allotted, around a third of what she normally makes.

“After ugly-crying for a second in the corner, I remembered that there will be a possible additional $600 per week coming,” she said, referencing the additional funding created by the federal Coronavirus Aid Relief and Economic Security, or CARES Act. She also said that the company she works for has paid for her insurance premiums while she’s out of work, which offers some relief.

Marshall is one of several villagers struggling to navigate the state’s overwhelmed unemployment benefits system, according to interviews this week.

The Ohio Department of Job and Family Services, or ODJFS, received 696,519 unemployment claims through April 4, nearly double the amount of claims the department fielded in all of 2019. The number of claims is set to increase even further in the coming months, after the federal CARES Act increased payment amounts to those who have been granted unemployment benefits, extended those benefits beyond the allowed 39 weeks and broadened unemployment eligibility to include self-employed people and independent contractors.

And though the ODJFS has distributed more than $124 million in unemployment benefits, it has not been able to keep up with the demand, so far only having dispersed funds to around 200,000 Ohioans.

Statewide, those attempting to file have lamented the difficulty of the process due to the massive influx of applications, including website lags and crashes and an inability to reach the department by phone. Locally, villagers have experienced the same difficulties and frustrations with the overburdened system.

Villagers reported varying levels of difficulty with the unemployment application process, with the process working more smoothly for some than others. The common thread for all those interviewed is the time spent waiting — not only for benefits, but also for answers; of those interviewed, only Marshall had begun to receive unemployment benefits at the time of reporting.

When Antioch College employee and Glen Helen Raptor Center Director Rebecca Jaramillo’s working hours were cut from 40 to 20 per week, she logged on to apply. Though the ODJFS website states that those experiencing partial unemployment may be eligible to receive reduced unemployment benefits, Jaramillo said she was confused about how to report her situation.

“I attempted it — I don’t know if it worked,” she said. “There’s not really a place where it asks if you are partially employed — the form is still kind of the standard unemployment form.”

With that uncertainty in mind, Jaramillo said all she can do is wait for a response to her application and follow up if issues arise, assuming that she’ll need to clarify her partial unemployment status once her claim is accepted; she’s not sure when she’ll hear something, but she doesn’t think it will be soon. She understands that the unemployment system wasn’t built to withstand the massive layoffs caused by the pandemic.

“I fully expect it’s going to take a while — there’s a lot of people trying to figure it out on both sides,” she said.

Maria Booth said she was somewhat lucky when it came time for her to file, though that good luck was predicated on some bad luck she’d had earlier in the year: she had already filed for partial unemployment in January when her hours were cut.

“Since I was already in the system, I didn’t experience the craziness that a lot of others did,” she said. “I didn’t have any trouble with the site, but I did do it at 4 in the morning — maybe no one else was on at that time.”

Booth was laid off last week — “I guess the nice way to say it is ‘furloughed,’” she said — from her position at a nursing home. Like many of those who provide medical care in similar positions, she is unable to seek other work in her field due to a temporary work restriction implemented by the company that employs her. Booth said she understands the restriction, which was put in place to limit exposure to the coronavirus — and she’s grateful that she’s able to spare her family from being further at risk since she’s staying home — but the restriction leaves unemployment benefits as her only option.

As challenging as it has been for those with outside employers to apply for unemployment, those who are self-employed — sole proprietors of businesses and independent contractors — are still waiting for word on when they’ll be able to begin the process of filing.

Lt. Governor Jon Husted announced at a press briefing in late March that unemployment benefits would be extended to those who are classified as self-employed via the Pandemic Unemployment Assistance Program as part of the federal CARES Act. The Act also includes provisions for extra funding of up to $600 per week for all approved unemployment applicants, as well as an additional 13 weeks of funding for those who have exhausted the state-allotted 39 weeks of unemployment benefits and who are still unable to find employment.

However, Husted projected that self-employed workers wouldn’t be able to file for the expanded benefits until at least mid-May.

The reason for the long wait, according to Bret Crow of the Office of Communications at ODJFS, is that the department is developing an entirely new online system to handle these claims — and that this system hasn’t yet been built. According to Crow, the department is in the process of contracting with a vendor to construct the new system.

“We decided to go that route to offer better customer service to the new group of folks to save strain on our already overloaded system,” he wrote via email this week. “As soon as that system is ready to accept new applications, we will inform folks how to apply.”

Crow also mentioned that the ODJFS had added an information page to its website that includes information about the expanded eligibility that will be offered through the CARES Act.

Rachael Lemberg has been to the page Crow mentioned, but said it hasn’t been updated with any new information since it originally went up — at the moment, it consists of a brief paragraph stating that more information will be added when available. In a sidebar, it also contains links to a PDF outlining the CARES Act provisions and to the employee and employer hubs for applying for traditional unemployment benefits, for which self-employed workers are ineligible.

“I don’t fault the state, what they’re having to deal with is immense, but it’s a little frustrating,” Lemberg said.

Lemberg, who is 74, receives Social Security payments — “but you can’t live on Social Security very well,” she said. To supplement that income, she has done job recruiting work in a variety of fields — which was her career for 30 years — as an independent contractor. That work dried up for Lemberg when the pandemic reached the U.S.

“I thought I might be able to do odd jobs, but of course, I can’t even do that now,” she said.

She said that with Social Security, she’s able to pay for essentials at the moment, which she acknowledged puts her in a better situation than many other self-employed folks.

“I can pay for housing and I can eat, so that’s the upside,” she said. “The downside is not knowing when I’ll be able to apply — I think the not knowing causes a lot of anxiety.”

Pamela Funderburg, a local massage therapist, said she tried to apply for unemployment right away, after the Ohio Department of Health ordered the closure of all massage therapy locations on March 19. She went through the process of applying online, and received a “generic” response that there was a problem with her application.

“I assumed I hadn’t done it right,” she said, “so I tried applying again.”

She received an identical response a few days later — and then she saw the Lt. Governor’s press conference and realized her error. She’s since received two letters from the state directing her to call ODJFS immediately. She’s been trying to call for days but, as others have experienced, she’s been unable to get through.

As a sole proprietor of her business, Funderburg is able to apply for a small business loan, a process which she has recently begun. In the meantime, like Lemberg, she’s left to wonder when she’ll be able to properly apply for unemployment.

What you need to apply

According to the ODJFS website, the quickest and easiest way to apply for unemployment funds is online. Qualifying applicants — those who were employed for at least 20 weeks and made an average of at least $269 per week before taxes — can log on at unemployment.ohio.gov to begin the process. Approved applicants will receive up to 39 weeks of benefits.

• The name, address, telephone number and dates of employment for their most recent employer.

A step-by-step guide to the entire application process is available to download at jfs.ohio.gov/ouio/pdf/QuickTipsAndStepByStepGuide.pdf; it can also be found in the sidebar of the YS News website at ysnews.com.

Those who are self-employed can keep a lookout for updates regarding when they’ll be able to apply at the Expanded Eligibility page: unemploymenthelp.ohio.gov/expandedeligibility. Updates about how to apply for the additional $600-per-week funding and the 13-week benefit extension provided by the CARES Act will also be available at this page.

One Response to “Unemployment woes in village”