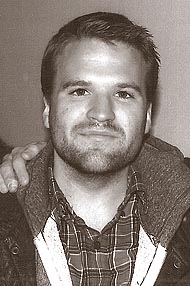 Too young and too sudden, our loving and beloved Martin Harold Benedict Borchers, of Yellow Springs, Ohio, died on Wednesday, May 27, 2020, at 10 a.m. in a car accident on Jackson Road. Martin was a loving son, brother, uncle and friend.

Born on Feb. 11, 1986, Martin lived on the family farm near Fort Loramie, Ohio, until moving to Yellow Springs in 2000.  Martin attended Yellow Springs High School, participating in drama, cross country and video, for which he received first place in the Abstract Video Art category at the 2004 National Scholastic Awards. He graduated in 2004 and then attended Wright State University, participating in film and political science. He was a member of the Phi Kappa Tau Fraternity as well as being in the Dayton Chapter of the Ancient Order of Hibernians.

Martin continued after college to pursue his art through poetry, writing, visual art, film and music, while continuing to live in and around Yellow Springs. Martin was a Renaissance Man who worked in a variety of places to support his art.

Martin was a generous spirit. He touched the lives of many through thoughtful gifts, kind words and reverent actions. Martin enjoyed his position as “uncle” to many children, both in the family and with friends.

Martin was raised in the Roman Catholic faith tradition and had strong spiritual connections to both Christianity and the Lakota Nation spiritual tradition. He recently became a member of a Lakota family and participated in a Lakota Nation documentary, providing both filming and editing to the project “The Gathering of the Bundle Keepers.”

Martin is survived by his parents, Jerome and Theresa Borchers; his brothers, Dylan and Samuel; his sister, Eileen; Grandma Link; and many, many uncles, aunts, nieces, nephews and cousins. Due to the COVID-19 restrictions, we very much regret that mourners cannot be with us to participate in funeral plans. Our heartfelt thanks to all who have reached out to us during this difficult time and thanks to all the Yellow Springs villagers who helped us raise Martin.

A future memorial will be planned in celebration of Martin’s life. Martin had a lifelong passion for justice and justice activity. We request any contributions for Martin be directed to the Lakota People’s Law Project at http://www.gofundme.com/f/martin-borchers-memorial-fund.  The Lakota People’s Law Project partners with Native communities to protect sacred lands, safeguard human rights, promote sustainability, reunite indigenous families and much more.