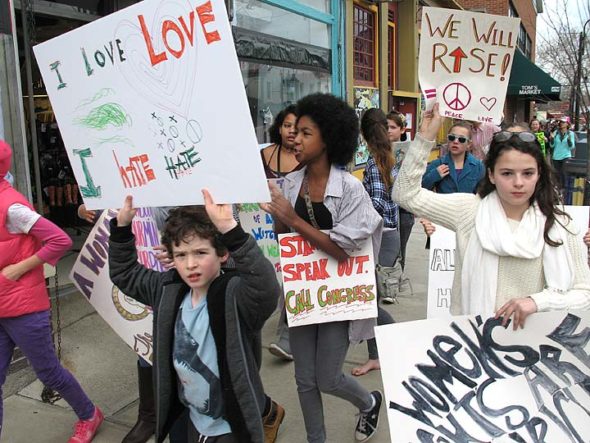 At least 250 villagers took to the sidewalks in downtown Yellow Springs last Saturday, Jan. 21, marching in solidarity with the Women’s March on Washington and hundreds of other marches around the country and world. The local Sister March was organized by McKinney Middle School seventh-graders Carina Basora and Ava Schell, who set out to create a positive event for all ages in support of equality and women’s rights. Judging by the march’s impressive attendance and joyful vibe — and the abundance of young, determined marchers, including, from left, Oskar Dennis, Malaya Booth and Vivian Bryan — they succeeded. (Photo by Matt Minde)

Yellow Springers played a small but mighty role in last Saturday’s monumental marches. Scores of villagers banded together to attend the historic Women’s March on Washington; some rallied in Courthouse Square in Dayton; others joined marches in whatever city in the U.S. and abroad they found themselves in. And at least 250 marched right here at home, thanks to the organizing efforts of two Yellow Springs middle-schoolers, Ava Schell and Carina Basora.

At half a million strong, the Women’s March on Washington amounted to a massive counter-inauguration, drawing more than three times the crowds to D.C. as Donald Trump’s inauguration the day before. (This according to a Jan. 22 report in the New York Times. But don’t tell Trump!) Amplifying the 500,000 of the D.C. march were Sister Marches in New York City (400,000), Chicago (250,000), Seattle (100,000) and many, many more. Over 900 more, in fact, according to a compilation by two researchers, Jeremy Pressman of the University of Connecticut and Erica Chenoweth of the University of Denver.

Tallying figures reported by news outlets and eyewitnesses worldwide, Pressman and Chenoweth estimate that between 3.2 and 5.2 million people marched on Saturday, from Anchorage (2,000) to Zebulon, Ga. (35), and from Antarctica (30) to Zambia (140). Who knows? Yellow Springers may have marched at some of these places, too.

You can examine all the numbers for yourself here.

And while the numbers don’t, um, lie, they also fail to capture the full breadth of truth. Photographs help fill in the gaps. Below, the News has gathered together images from a range of marches, some taken by our staff, others submitted to the paper by villagers. This page is a living gallery; we will add photos to it as we get them, so we encourage you to submit.

Finally, you can read a personal reflection on the D.C. march here, written by News staffer Lauren “Chuck” Shows.

YELLOW SPRINGS | Back to top
At least 250 villagers took to the sidewalks in downtown Yellow Springs last Saturday, Jan. 21, marching in solidarity with the Women’s March on Washington and hundreds of other marches around the country and world. The local Sister March was organized by McKinney Middle School seventh-graders Carina Basora and Ava Schell, who set out to create a positive event for all ages in support of equality and women’s rights.

DAYTON | Back to top
Marchers who did not go to D.C. took their feet and signs to Dayton, where a reported 3,000 protesters gathered.

WASHINGTON, D.C. | Back to top
After riding through the night via chartered bus, and deposited in a Washington, D.C., parking lot after sunrise Saturday, Jan. 21, 55 women from Yellow Springs prepared to join hundreds of thousands of people from across the country streaming toward the National Mall for Saturday’s Women’s March on Washington. The bus passengers represented a portion of village residents who particpated in the historic event.

MARCHES ELSEWHERE | Back to top
The Women’s March on D.C. also spawned over 900 solidarity marches across the United States and around the world.