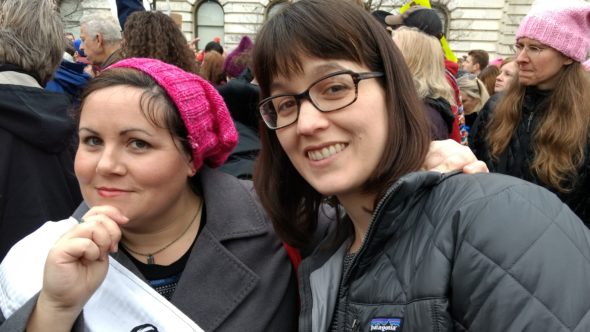 With my best friend Cherie at the Women's March on Washington.

My best friend Cherie is a one-in-a-million friend who is at once generous, beautiful and a genius. I was recently staring at her face, which is beautiful, and sitting on her couch in her Washington D.C. apartment, where she generously offered to let me stay for free. She told me about her recent work at American University, where she is getting her Ph.D. in some kind of political science that I can’t name because I, unlike her, am not a genius. She was talking about participant observation, a research method that involves an outsider involving herself in the cultural framework of a given community for an extended period in order to closely study it. Cherie and her fellow doctoral candidates had been required to be short-term participant observers as part of their own studies; she had elected to spend her time with some folks who beat the streets of D.C. attempting to collect funds for various charitable causes.

“OK,” I said, “but ultimately, in your experience, doesn’t being an outsider taint the research in some way?”

“Well,” she said, sipping English breakfast with her cat in her lap, “most scholars say that every researcher brings their own experience to any kind of research. Data is informed by the one who’s collecting the data. Any documentary you see is through the lens of the documentarian, for example.” (Did I mention that my best friend Cherie is also an award-winning filmmaker?)

Anyway, I’m sure I’m mischaracterizing this conversation which, while I have put quotation marks around it, is not verbatim. What I’m getting at here is that talking with Cherie highlighted something about the roles I play in my own life. The very concept of this blog began upon the premise that I’m living, working and writing within a community of which I am not a native. Seven-odd years on, I still consider myself something of a participant observer in Yellow Springs; that’s not to say that I’m resistant to allowing myself to be fully assimilated or anything, but as Cherie pointed out, my prior experience will always color my vision here. The same can be said of my own family unit, in a way; both my husband and child are natives of this area, and in that way are set apart from me in their experience.

A few years ago I started attending the YS Friends Meeting, another community into which I’ve thrown myself with very little real common background. My goal, ultimately, is to integrate into this particular community, so far as that’s possible. I’m not alone in being a convert of sorts; there are all types of people at the Friends Meeting, folks who were not born Quakers and who bring their own unique outlooks into the worship, a practice which this Quaker Meeting, at least, not only facilitates but celebrates. One thing a majority of the members of the Meeting have in common, no matter their respective backgrounds, is a devotion to issues of social justice, and to resisting practices which they believe are unjust. I can look around on a Sunday morning and know that just about everybody I see has participated in some kind of peaceful resistance at some point in their lives.

Which is one reason why I was sitting in my best friend’s apartment in Washington D.C. I was there to attend the Women’s March on Washington, which, if you’re on the Internet right now, I probably don’t need to explain to you, but for the sake of posterity: the Women’s March on Washington was organized in response to the presidential election of Donald Trump, who, since I am a blogger and not a journalist, I am free to say is a racist, sexist, hateful demagogue. His rise to political power was fueled by promises to limit the personal freedom of people who are not white, not Christian, not straight and, of course, not male; even now, less than a week from his inauguration, he has taken action to make good on those promises.

But I’m not, in general, a protester. I’m not a demonstrator. In fact, I’m a straight, white, Christian person who, for the most part, has not experienced and will not experience much in the way of in discrimination. Any injustice I’ve encountered over the years has been the result of being a woman, sometimes a woman of limited means, and I’m lucky to be able to say these injustices have been drops in the bucket of an otherwise easy life.

These facts repeated in my head as we walked away from Cherie’s apartment on Saturday morning, on our way to the National Mall. I wondered who I was marching for. I wondered if I belonged in this fight, when I had no prior experience. I wondered if, again, I was playing participant observer.

These thoughts dissipated by the time we were shoulder to shoulder on Independence Avenue. It was hard not to get swept up in the general esprit de corps, hard not to notice that there were more women around me than I’d probably ever seen in my life, hard not to literally bump elbows with someone and feel like the two of you were, in some indeterminate way, the same. There was anger and resistance everywhere, and it was tempered with the kind of joy that only such vast numbers can produce. After some time, I stopped observing and became, not a body, but part of a larger body, a single cell in this vast, furious beast that was moving through the streets of Washington D.C., calling for change.

Hours later, feet burning and falling asleep on my best friend’s couch, I did worry a little. I know there are people I love who feel that I should observe and not participate, who now perhaps consider me just another harpy screeching about God knows what. These people might keep me at a distance now; they might hate me. This is, realistically, the only price I’ll pay from my position of privilege. And while a steep price, it’s nowhere near what some other women have paid and will continue to pay. The only way I can offer to level out this inequity is to keep boots on the ground, to remain part of the beast. I hope I can do it. I hope you’ll help me.