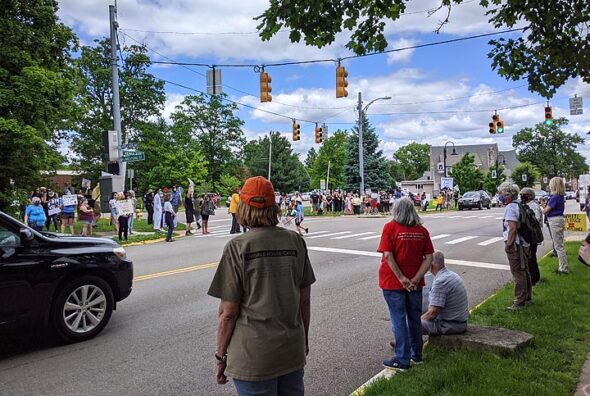 Around 400 villagers protested the recent killings of Black people by police on Saturday, May 30. Another demonstration is set for Saturday, June 6, at 1 p.m. at the intersection of Xenia Avenue and Limestone Street. (Photo by Chandra Jones-Graham)

This week, Yellow Springs Police Chief Brian Carlson and Yellow Springs Schools Superintendent Terri Holden released statements addressing the recent death of George Floyd at the hands of police in Minneapolis, and the ongoing issues of police brutality against people of color in the country. They discussed the impact of the week’s events on their respective institutions and their efforts to be actively “anti-racist.”

Carlson wrote, “the murder of George Floyd is a blatant demonstration of abuse of power and the result of systemic racism within the United States.” He adds:

The continued practice of targeting is due to deeply ingrained problems through poor law enforcement practices. Frankly, we, law enforcement officers, have to undo the toxicity present within the Law enforcement and judicial system. It is unacceptable to be complacent in any act of oppression; thus making it quintessential and our civic duty to undo the evident inequities and oppression to move towards a world in which all are safe.

Carlson said the the recent national incidents may lead to additional training for local officers on de-escalation tactics, nonviolent methods of restraint and “competency in race relations and knowledge of disparities that others face, especially those outside of our own.” “Instances of improper and discriminatory policing and practices that are created by implicit biases and prejudice will never be tolerated in Yellow Springs,” Carlson adds.

In her statement, Holden addresses the idea that “educators are not neutral:”

Educators are often told not to talk about politics or highly controversial public events. Some argue that we teach all children and our own personal beliefs should not get in the way. But teaching is a personal act. Education is not neutral. How do we teach our children if we cannot talk to them openly and honestly about issues and problems they see with their own eyes? We cannot be neutral about the death of another person of color at the hands of law enforcement. We cannot be neutral about the injustices that we see, about the injustices in a system of which we are a part, about the injustices our very own fearless thinkers of color face every day. Honoring the humanity in all of us is our responsibility. Teaching children to be better humans, through word and action, is our responsibility. The teachers, staff, and administrators take very seriously the responsibility to teach the children of Yellow Springs to be future ‘upstanders,’ activists, and empowered, engaged citizens.

Holden says that it is the responsibility of the local school district to “look inward, examine, and then dismantle any practices that reinforce racist attitudes and beliefs, however unintended and unconscious they may be.” This summer, local teachers will participate in a book study to explore inherent biases, followed by a community-wide book study.

Read the full statements at the links below.

Chief Brian Carlson Statement on the Death of George Floyd & Policing in the Village of Yellow Springs, June 1, 2020