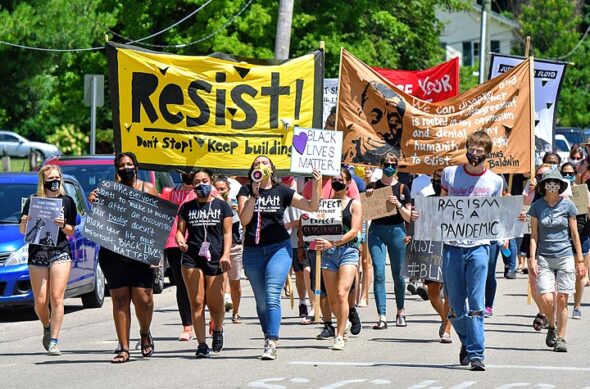 On July 11, 2020, villagers gathered for the seventh straight week to demonstrate against racism and police brutality. (Photo by Kathleen Galarza)

On Saturday, July 11, villagers met for the seventh weekend in an ongoing demonstration against racism and police brutality. Each weekend’s event follows a different theme, with the July 11 rally bearing the theme “Empower Black Women.” The demonstrations have been organized in part by local young women and YSHS students.

Following the speakers’ addresses, those assembled marched down Xenia Avenue toward Corry Street, continuing down Dayton Street, Walnut Street and returning to Xenia Avenue before heading toward Dollar General.

Below is a YouTube playlist of the women speakers featured at the event, including transcriptions of their words. For more recordings of some speakers and performers at past YS Speaking Up for Justice events, check out this Soundcloud playlist.