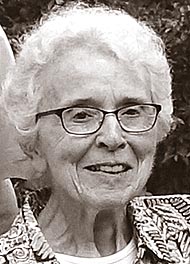 Ruth Elizabeth Farmer Bent died on July 31, 2020, while sleeping peacefully in her favorite chair, in the home she and Tony built in 1960. She was 94 years old.

Ruth was born Feb. 14, 1926, in Minneapolis, Minn., and moved at an early age to Moscow, Idaho, where she spent her childhood. After high school, Ruth went to Oberlin College, where she received a Bachelor of Arts in music. She then went to Western Reserve University (now Case Western Reserve University), where she received a master’s in library science. After graduating, she worked in the music department of the Cleveland Public Library.

Ruth first met Tony Bent (Wilson Hopkins Bent) at Oberlin College. They were married on July 8, 1950, and then lived in Chicago, where she worked in the music department of the Chicago Public Library. They moved to Yellow Springs in 1952 and both joined the faculty of Antioch College, where Ruth worked in the Olive Kettering Library. They moved frequently during their first eight years in Yellow Springs, but in 1960 built their house on West South College Street. The design for the house was a gift from her architect brother, Fred Farmer.

While embracing the full-time venture of raising four children, Ruth continued some part-time work at the college library, and then became full-time director of the Fairborn Public Library. One major project she worked on at Antioch was to organize the papers of Arthur Morgan, the influential Antioch past-president and nationally prominent civil engineer. That work led to her studying at the Library of Congress and becoming a Certified Archivist. After four years with the Fairborn Library, Ruth returned to the faculty at Antioch, where she loved working with the student and faculty patrons. She was a valued contributor to college governance well beyond the library. She retired from Antioch in 1991 with the title of Librarian, Emerita.

Ruth was an active musician throughout her life. An accomplished pianist, she was the musical director for the complete run of Gilbert & Sullivan operettas at YS Center Stage. She directed the YS Community Chorus for over 20 enjoyable years. She also directed the choir at First Presbyterian Church, and the seasonal Nativity plays that were performed with traditional flair. Ruth was a co-founder of Chamber Music in Yellow Springs, where she was deeply involved in artist selection. Ruth was also a deft and supportive accompanist to many YS High School students for their performances at the annual Solo and Ensemble Contests.

Ruth joined the Presbyterian Church upon arriving in YS, and was an active member for over 50 years, including many terms as a deacon and an elder. She particularly enjoyed taking part in the planning and execution of the annual Strawberry Festival on the church lawn.

Being a lifelong voracious reader, Ruth overcame her gradual loss of eyesight with the invaluable help of many librarians and Library of Congress recorded books. She was also an avid cook, both to the benefit of those around her and also as an enjoyable daily avocation. Elizabeth Tobey was a valued co-conspirator in that area for several years. Special thanks are also extended to Richard Zopf, Jane Brucker Benham and the Sikes family on Ruth and Tony’s behalf.

Ruth is survived by her four children, Nancy Bent (and Roger Reason), of Tucson, Ariz., Janet Bent (and Rick Pinkley), of University Place, Wash., Win Bent (and Susan Richter), of Austin, Texas, and Andrew Bent (and Anna Huttenlocher), of Madison, Wis.; and six grandchildren. She was preceded in death by her brother, Fred Farmer, and her husband, Tony.

Ruth’s remains were donated to the Boonshoft School of Medicine at Wright State University; a memorial service is being planned for the future. In lieu of flowers, the family asks that contributions be made to Glen Helen Association or Chamber Music in Yellow Springs.