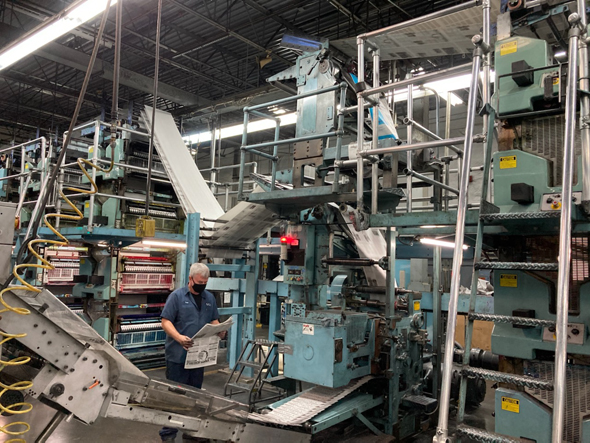 This is what a Wednesday afternoon at AIM Media Midwest looks like printing the Yellow Springs News. Pictured here are two segments, or “towers,” of an offset rotary press as they work furiously in tandem to print, fold, cut and transfer our publication — all 1,700 weekly copies — in just a matter of minutes. At this point in the production process, lead press operator Todd Snodgrass inspects a newspaper for any printing hiccups such as smeared ink, blurry images or crooked page spreads. To the right, toward the top of the righthand tower, is another press operator checking on a set of cylinders as they press ink onto the paper. (Photo by Reilly Dixon)

What goes into the making of a newspaper?

Well, thus far in the “Who’s the News?” series, we’ve attempted to answer this question by introducing our full-time staff: the editor, reporters, village desk editor, advertising manager, designers and bookkeeper; as well as our part-time staff: the proofreaders, photographers distributors and columnists.

While all of these staffers play their own crucial role in producing the Yellow Springs News each week, we can’t exactly say they make the newspaper.

So, to see who does, it’s time to go even further behind the scenes — to, more specifically, Miamisburg. Here, we can meet the men and the machines responsible for making the News tangible — for manufacturing what you, the reader, can hold in your very hands.

The printing of a paper

It’s Wednesday morning in the News office in downtown Yellow Springs. For the past 48 hours, all hands have been on deck in assembling this week’s paper. The office smells like coffee and everyone is focused. The writers are proofreading every column inch one last time, line by line, word by word. The production team stands ready to make any last-minute corrections or advertisement changes.

Around noon, the editor gives the green light. The paper can now be put to bed. Separate PDF documents of each page of the paper are sent to the prepress specialists over at AIM Media Midwest. It’s at this point that this issue of the News is fully in the printers’ capable hands. In an instant, our files span the distance of 30 miles and arrive at AIM’s production facility.

According to Brickles, the News has been passing through their hands for “somewhere in the ballpark of 25 years,” at this printing facility, and those of a previous printer the News used in London. And, much to the pleasure of our writers and designers, Brickles and Billing often give the pages one last general proofing.

If they don’t notice any corrupted elements in our files, the prepress specialists then digitally transfer each page to separate “plates.” These plates, which are thin aluminum sheets, are etched with faint laser-made impressions of each broadsheet. If this week’s paper is twelve pages, then twelve plates are made. In just a matter of minutes, one can see the articles and images come into relief on the aluminum surfaces.

Now, a small team of press operators move the finished plates from the prepress room to the cavernous production floor. Here is where the magic happens. The area churns and hums with the movement of machinery, and all around are publications at various stages of assembly. Newspapers and magazines of all kinds and sizes whiz by. A symphony of industry — of methodical clicks and clunks, of rhythmic whirring and low vibrations — fill the air. It smells definitively like ink in here.

The press operators take our plates to the heart of this sprawling room — to a row of 20-foot-tall mechanical “towers.” These are the offset rotary presses. Individual plates are loaded into a designated press cylinder near the tops of several towers. Each tower gets two plates. The top-most cylinders draw from black inkwells, whereas the cylinders toward the bottom of the towers use color ink, though our newspaper has no use for those.

With the flipping of a couple switches, some last-minute checks and the flashing of a thumbs-up from Todd Snodgrass, the lead press operator, the presses spring to life. Within an instant the machinery of each tower begins whirring with dramatic locomotion.

Twenty-seven-inch-wide paper is pulled from colossal spools behind the towers and is led through the plated cylinders. As they turn, the cylinders exert incredible pressure onto the paper as it seamlessly glides through. On the other side of the cylinders, the paper emerges with ink. Here, the News comes to life. 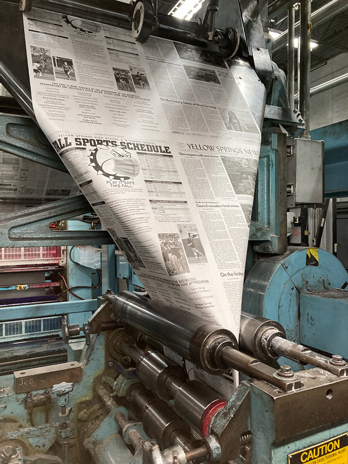 Here, a recent issue of the Yellow Springs News runs through the folding mechanism on the press. (Photo by Reilly Dixon)

It’s this specific point in the process that never ceases to amaze plant manager Joe Padgett, even after his 45 years in the printing business.

“Seeing the way the ink lays down on the paper, seeing clean photos appear on paper that was just blank: it’s just like magic,” Padgett said.

At first, one can make out the details of each duplicated page on the unspooling trail of paper as it moves to the next stage. But, as the conveyors pick up steam (figuratively speaking), the procession of print becomes less and less distinguishable. Within just minutes, the machinery is pulling the paper through at an astonishing rate. It now moves through the press in a maddening gray blur.

This parade of paper then takes a dive through a razor-sharp slicer toward the rear of the towers, thus getting cut into 23-inch-long segments — the unfolded length of our broadsheet. From here, the machinery confidently performs its impressive origami capabilities. It compiles each cut broadsheet into an organized stack, and then folds the stacked papers — first lengthwise, then laterally — at breakneck speed. A cavalcade of folded newspapers now streams out of the towers.

Press operators begin inspecting the newspapers as they emerge. They thumb through the still-warm paper, inspecting its internal geometry and legibility, examining the way the ink set on each page. In some cases, press operators need to climb into the towers to adjust the placement of the plates on the cylinders. The lead press operator may have to reconfigure measurements on his console.

The other press operators refer to this process as a “test run.” According to Snodgrass, most test runs require the printing of several hundred initial copies. But once everything’s been properly troubleshot and the ink is setting just as it should, perfectly printed copies fly out of the press in no time at all.

Once properly printed, then cut and folded, the newspapers slide down a conveyor belt into a machine that stacks the papers in bundles of 100. A plastic strap is then fastened to each bundle. A “catcher” stands by to receive each bundle as it comes down the conveyor belt, and to move it onto a dolly for shipment or delivery. In our case, News distribution manager Jeff Vawter is on the scene to bring the bundles back to Yellow Springs.

All in all, once the ink is setting on the pages properly, once all the presses’ parts are working in perfect concert with one another — once everything is working as it ought to, the printing of all 1,700 copies of this week’s issue of the News takes only five minutes. Whew!

If only Gutenberg could see us now.