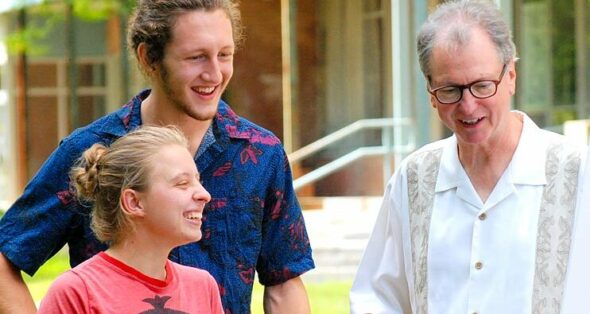 Antioch College President Tom Manley is leaving his position next June, at the end of his five-year contract. He has served since March 1, 2016, and is pictured here speaking to students during the college's FACT brainstorming sessions in 2016. (Submitted photo by Erin Cole)

Antioch College President Tom Manley is leaving the presidency earlier than planned due to health issues.

Manley will become “president emeritus” as of Dec. 1, he announced in an email to the college community on Friday, Oct. 30. Antioch College previously announced in August that Manley would be leaving his post after his five-year contract expires on June 30, 2021.

Interim leadership of the college will be shared by three current members of the Antioch College Board of Trustees. Sharen Neuhardt will oversee operations; John K. Jacobs will handle finance; and Shadia Alvarez will direct equity and strategic development. Jacobs and Alvarez are alumni of the college, while Neuhardt is an attorney who lives in Yellow Springs. Neuhardt and Jacobs have been serving in senior operational roles at the college since May, according to previous News reporting.

The interim arrangement will continue until a new president is appointed. Details about that process have not yet been made public.

As president emeritus, Manley will collaborate with Antioch College trustees and others “primarily in an advisory capacity,” and will handle “strategic projects and partnerships that advance Antioch College Works,” he wrote in the email announcing his departure. These duties will continue until the end of his contract next June.

Board Chair Maureen Lynch announced on Oct. 18 that Manley had been named president emeritus in recognition of his service “in a particularly difficult period for the College and higher education at large,” according to a statement from college spokesperson Christine Reedy.

President emeritus is a “permanent, honorary title, and the president emeritus holds the same teaching and research privileges as a retired member of the faculty,” Reedy clarified regarding the role.

In his recent email, Manley identified his health issues as being related to treatment for prostate cancer. The treatment he is seeking for the condition could last for six months or longer.

As the second president of the relaunched Antioch College, Manley has served during a time of challenge and change. A few months after he stepped into the presidency on March 1, 2016, Antioch achieved accreditation from the Higher Learning Commission, the culmination of a multi-year process. In the years that followed, Manley spurred a campuswide reconsideration of the college’s mission, vision, learning assets, curriculum, governance structure and more.

The college’s current self-designed curriculum, new marketing campaign for student recruitment and expanded representation of students, staff and faculty on the Board of Trustees stemmed from those planning efforts.

Yet Manley’s tenure also saw the college struggle with enrollment declines and financial difficulties, resulting in several rounds of budget cuts and the letting go of staff and faculty. In the past two years, financial challenges and changing strategic priorities led Antioch to sell its longtime public radio station, WYSO, and 1,000-acre nature preserve, Glen Helen, to community organizations. The WYSO sale took place in 2019, while the Glen was sold in 2020.

Last spring, Manley oversaw Antioch’s early response to COVID-19, when the college pivoted quickly to online learning and developed a plan for reopening its campus this fall, as well as furloughing around 30 college employees.

And late last year, Manley helped design and launch a new program called Antioch College Works, which provides free tuition for lower-income students and expanded work opportunities during college and after graduation. College leaders have credited the program with boosting enrollment this fall, to 116 students, 50 of whom were first-year students.

In his email to the college community, Manley described serving as Antioch College’s president “the honor of a lifetime.” He also underscored his belief in the college’s relevance and importance as “a community of learning emboldened by the difficulties of the time.”