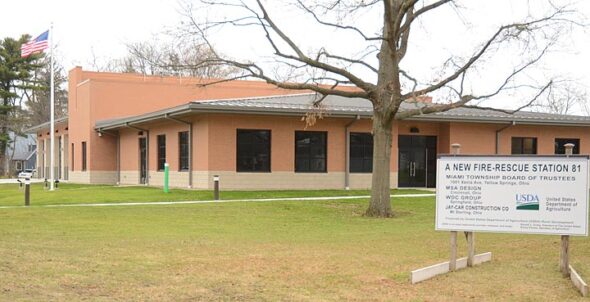 Miami Township Fire-Rescue moved into the department’s new firehouse on the south of town Nov. 18. (Photo by Carol Simmons)

•After running unopposed and being re-elected in the 2019 fall general election, Miami Township Trustee Chris Mucher was sworn in to his sixth full term during the Trustees’ first regular meeting of 2020. Later in the meeting, he also was reinstated as chairperson of the three-member board by his fellow Trustees, Mark Crockett and Don Hollister.

•With the pandemic related shutdown across the state in March, the Trustees began conducting their meetings virtually through the GoToMeeting platform.

•In the spring primary election, originally scheduled for March 17 and extended until April 28 because of the pandemic, 83% of local voters cast a ballot in favor of a 3.9-mill, five-year renewal levy for Miami Township Fire-Rescue. The levy raises operating funds for the local fire department, which provides fire and emergency medical service to the approximately 7,500 residents, and more than one million annual visitors, to Miami Township, eastern Bath Township, Yellow Springs and Clifton.

Revenue from the operating levy is supplemented annually by $100,000 in emergency medical service billing and $110,000 from a contract with Bath Township for services to the neighboring township, according to Fire Chief Colin Altman. The levy, which has been in place for more than 25 years, generates about $580,000 a year and costs property owners about $116 a year for every $100,000 assessed home and property valuation, according to Altman.

•In April, Fiscal Officer Margaret Silliman was sworn in for her sixth full term handling the township finances and serving as clerk of the Trustees’ meetings, after being re-elected in the fall 2019 election.

•After a September 2019 groundbreaking, construction on the Township’s new firehouse on the south side of town proceeded mostly on schedule throughout 2020, despite COVID, and the department took occupancy Nov. 18. Located on two acres at the corner of Xenia Avenue and East Herman Street, the nearly 17,000-square-foot facility features offices for fire department personnel and Township government, four bays for emergency vehicles, six private sleeping rooms for overnight shifts, a kitchen, a fitness room, a study enclave, a watch room and multiple storage rooms. A public open house has been delayed until at least spring because of the pandemic, but Chief Altman hopes soon to host a virtual tour of the facilities on Facebook. The official address is 101 E. Herman St.

The approximately $5 million project was financed through a 2.4-mill, 30-year bond levy approved by voters in 2017. The levy costs property owners about $84 per $100,000 assessed property valuation.