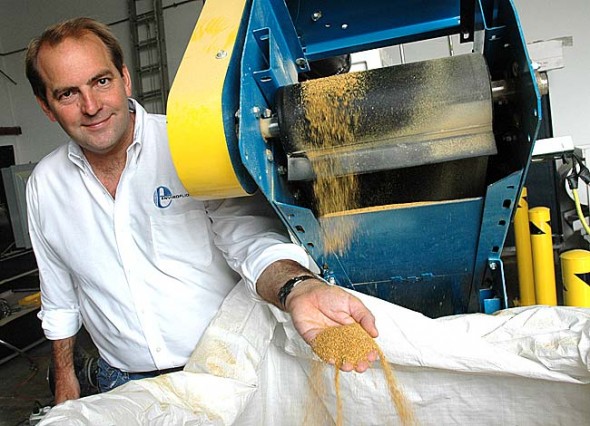 Millworks update— EnviroFlight to leave after 2022

This is the second of three articles on developments at the local industrial park.

A sustainable feed company founded in Yellow Springs will likely depart the village for good two years from now.

When that happens, Yellow Springs will lose 20 jobs and hundreds of thousands of dollars in utility payments and payroll taxes.

Founded at the Millworks industrial park in 2009 by Glen Courtright, EnviroFlight will stay in town through 2022.

The growing company, now owned by Darling Industries and headquartered in Maysville, Ky., chose to expand at its Maysville location, rather than move its local operations to the Village-owned Center for Business and Education, according to an announcement last month.

The Village had arranged $210,000 in county and state incentives to retain the firm, which produces animal and plant feed from black soldier fly larvae. But Maysville offered more, and EnviroFlight will now build a $20 million facility and add 40 jobs there, where it already employs 73 people.

“They got $800,000 in incentives in Kentucky,” Village Manager Josué Salmerón said last week. “We can’t compete with that.”

EnviroFlight’s future here has been up in the air ever since Millworks was purchased by new owners in 2018. Those owners are now selling, the News reported last week.

Soon after the purchase, the four-acre park’s new owners, Jessica Yamamoto and Antonio Molina, decided not to renew EnviroFlight’s lease, saying the feed production facility took up too much space and didn’t fit with their vision for the park as an entertainment and cultural center.

EnviroFlight’s previous lease was through 2021; in an agreement finalized last week with Millworks’ owners, the lease was extended for an additional year.

“At this point it’s safe to assume we’ll be in YS through the length of the extended lease, which is the end of 2022,” EnviroFlight’s VP Sales and Marketing, Carrie Kuball, confirmed in an email this week.

In 2019, EnviroFlight President Liz Koutsos told the Yellow Springs Planning Commission that the company had planned to maintain its local facility as a research and development site after opening a commercial-scale facility in Kentucky the previous year.

“We had no intention of leaving,” Koutsos said.

But that has now changed.

“We will be leaving the Millworks location in Yellow Springs,” Kuball said.

The one-year lease extension will give the company extra time to build the new facility and transfer employees, Kuball added.

EnviroFlight’s planned departure is one of several changes at the local business park, the bulk of which was put up for sale in 2020. The three-acre parcel that includes most of the buildings is currently listed at $1,562,000. The entire park was purchased for $1,150,000 in late 2018.

Salmerón views Millworks as important to the economy, as it is the only industrial space of its size and can accomodate businesses from small to large.

“We look forward to working with the owners and future owners of Millworks to have a robust economic development strategy that would benefit the new owner and our community,” he said. “We find it critical to the economic vibrancy and diversity of the village.”

In other news at Millworks, upstart craft distillery Tuck ‘N’ Reds is looking to open in the spring, and Yellow Springs Brewery is investing in production equipment at Millworks, while working toward opening a second taproom at its facility on the south end of town.

In addition, a new commercial wholesale bakery, Yellow Springs Bakery Company, recently moved into Millworks. The plans for the new bakery, a joint venture of Frank Doden, Rob Houk and Karina Tafolla, will be covered in an upcoming issue of the News.

The copper stills may soon be filled at Tuck ‘N’ Reds Spirits & Wine. By later this spring, villagers might even be able to stop by to sip their spirits and mountain wines, or purchase some locally-made liquor to go.

“The question always is, when do we plan to open — that’s the big one,” co-owner Charlie Harrell remarked in a recent interview.

But with two permitting processes nearing their conclusion, the answer could be “soon,”  according to Harrell, aka “Red.”

Even though COVID-19 delayed the inspections process, the distillery is on track to open — if all goes well — in a matter of months.

“We’ve done phenomenally well,” Harrell said of the process, which can take years.

The distillery is expecting final inspections this month from the Ohio Department of Commerce’s Division of Liquor Control, while working to wrap up a permit to operate from the U.S. Department of the Treasury’s Alcohol and Tobacco Tax and Trade Bureau, according to Harrell.

Once approved, Tuck ‘N’ Reds will be allowed to sell customers tasting tickets for four quarter-ounce pours of spirits and four two-ounce pours of mountain wine, which they define as wine produced from a variety of fruits and flowers, but not grapes. Their motto, Harrell said, is “This s—t ain’t made from grapes.”

“To us, a mountain wine has a little bit higher ABV [alcohol by volume], is a little more unrefined and rugged, has slightly more sediment, and a lot more flavor,” he said.

The new business is the joint venture of Harrell, Tucker Thompson, aka “Tuck,” and John Mick. They call themselves “two hillbillies and a hippie,” with Mick as the hippie. Harrell hails from DeGraff, Thompson lives in Springfield and Mick lives in Lena.

“That stuff is gas — it could run your car,” Harrell said of the latter.

Once all the permits are in hand, patrons will also be able to purchase alcohol for off-site consumption in quantities of one-fifth or one liter.

Sometime in 2022, the distillery hopes to acquire a liquor license that would allow them to serve their brand of spirits directly or in mixed drinks, without the limitations of the ticket system.

“It doesn’t allow us to sell all varieties of alcohol, just ours,” Harrell clarified of that license, which is unique to micro-distilleries.

En route to opening, Tuck ‘N’ Reds undertook an extensive renovation of its Millworks space, which, all told, is more than 10,000 square feet, including areas for production, warehousing and tasting. Renovations began after Planning Commission approved a conditional use permit for the facility in the summer of 2020.

In order to bring a “flavor of the country right down to Yellow Springs,” renovations utilized reclaimed lumber and old barn wood, “stuff you can’t get at Lowe’s or Home Depot, ” Harrell said.

“It will look rustic and industrial,” he said. “Lots of copper, lots of country, lots of heritage.”

“It’s something our great-granddad would be using,” Harrell said.

“In collaboration with the brewery, it’s going to be a fantastic place to visit,” Harrell said.

Millworks offers plenty of space, and time, to grow — their current lease is for 13 years.

Ultimately, Harrell envisions Millworks as a “craft libation destination,” and a village cultural center with live entertainment and adult recreation, a kind of “Young’s 2.0.” He hopes the industrial park’s new owners agree with that direction.

“I hope that we can collaborate to build Millworks into what I think it could be,” he said of its future owners. “Yellow Springs is a unique melting pot. It has made it easy for a couple of moonshiners to make it home.”

Yellow Springs Brewery, meanwhile, is expanding elsewhere in the village.

The local brewery, which got its start at Millworks in 2013, is opening a second local taproom at its location on the south end of town, 1475 Xenia Avenue.

The brewery will keep its original taproom at Millworks, where it also maintains its production and canning facility.

Initially, YS brewery owners Lisa Wolters and Nate Cornett bought what they dubbed the “South House” to have more space to barrel-age their beers and to host events. That changed when the virus hit.

“The original idea was going to be a rental space for special events,” Wolters said in a recent interview. “But with COVID, we had to change our plans and it turns out it was a perfect space for a secondary taproom.”

Their original taproom in Millworks is just 1,000 square feet, while the new taproom is three times as large, Wolters noted, which will allow more room for social distancing.

“I think people will be comfortable there,” she said of the more spacious area.

What they’ve described as a “little neighborhood taproom,” could open soon, as the brewery is in the final stages of the state liquor licensing process.

“It could be any day or two months from now. But we are ready,” Wolters said.

Initially, the taproom will be open limited hours, with the possibility of special ticketed events during off days, she added.

Yamamoto and Molina’s initial renovation plans for Millworks included an expansion of the brewery’s taproom, which would have been relocated elsewhere in the industrial park. In fact, the brewery was positioned as the park’s “anchor tenant” for the development of other entertainment and cultural activities.

But those renovation plans never came to fruition, and the brewery sought to invest instead in the former bowling alley it purchased in 2016.

“The South House is where we decided to put our efforts,” Wolters said.

Still, the brewery has no plans to leave its space at Millworks, where they are at the start of a 10-year lease. Recently, they invested in a new canning line, which cans beers four times as fast as before and directly affixes labels.

The Millworks space also has the benefits of being close to downtown and along the bike path. It’s a site “people gravitate toward,” Wolters says.

“We really hope to keep both. They will each have a unique offering.”

One Response to “Millworks update— EnviroFlight to leave after 2022”