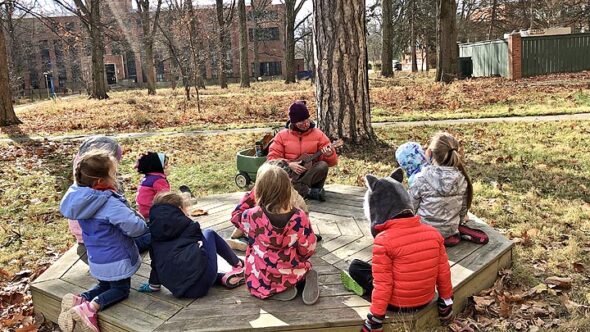 Villager Caryn Fox Diamond, the center’s other instructor, played the ukulele for Open Air Village students on the Antioch campus recently. The new early childhood education center currently caters to children ages 3 to 5, with hopes of adding programming for older children after the pandemic. (Submitted photo)

The middle of a worldwide pandemic might seem like a daunting time to open a new business — but Open Air Village, Yellow Springs’ newest early childhood education facility for 3- to 5-year-olds, hit the ground running last summer, just months after much of the world skidded to a halt. The facility, led by owners, operators and new villagers Nicole and Bryan Gay, is located on the Antioch College campus where Children’s Montessori Cooperative formerly operated.

Open Air Village focuses on child-led education and, as suggested by its name, is committed to keeping its young students engaged with nature by spending large swaths of the school day outside. This particularity has made its debut year, in a time of indoor physical distance restrictions and sanitizing procedures, somewhat less difficult — but only somewhat.

“This first year has been like childcare boot camp!” said Nicole Gay via Zoom in February. 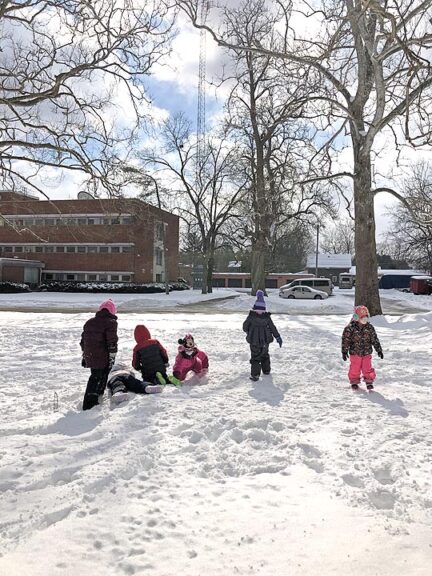 Last month, students at the Open Air Village had fun playing in the snow. (Submitted photo)

“But it’s been wonderful,” she clarified, saying that opening a facility like Open Air Village has long been a “dream” for her and her husband. For Nicole Gay in particular, the dream had its nascency when she was a student at Wright State University. Both she and her husband were students there, and she originally planned to pursue a career in journalism and mass media communications. Gay changed her focus, however, after the young couple began volunteering in a Sunday school class for preschool-aged children.

“The parents would come to pick up their kids and I wasn’t ready for it to be over,” she said. “It kind of just dawned on me that this is what I need to be doing — this is what my career should be.”

After graduating with her degree in early childhood education in 2010, the first years of Nicole Gay’s teaching career were spent substitute teaching at Mills Lawn Elementary School and working in a school for children with diverse education needs. Within a few years, she was employed at her “dream job,” teaching kindergarten at a public school in Piqua. A few years later, however, she put that particular dream on hold to stay home with the couple’s daughter while Bryan Gay worked in the restaurant business.

Nicole Gay spent a lot of time making sure their toddler was engaged and enriched, taking her to library story times, nature walks and tumbling class, among other things. Because of her educational background, Gay said she often found herself making mental notes of the ways she might have done things differently if she were holding the reins.

“I would think, ‘Oh, I wish they would have explained that to the kids in a more developmentally appropriate way or done something more hands-on,’” she said. Often, these thoughts would turn into conversations at home between the two parents, who would dream up their own ideas for classes.

The dreams finally began to shift into reality in 2014 via an unexpected source: a felt tree. That year, Nicole Gay, having seen a similar item on the Pinterest website, designed a felt Christmas tree with felt ornaments, intended as an educational toy for her then-18-month-old daughter. She posted a photo of her creation to Facebook, and immediately began receiving requests from friends asking her to make more for their children. By the following year, her post went viral and the couple was flooded with requests for trees, selling more than 200.

“That was actually when [Bryan] stopped working in restaurants, because we had to buckle down and do mass production on the trees,” Gay said.

After that success, the couple contemplated how they could best grow their business, now named Ta-Da Learning. After hearing from several families who were looking for kindergarten readiness tutoring, Ta-Da Learning veered in that direction, hosting its first such session under a rented shelter at Fairborn Community Park, where Nicole Gay essentially re-created a kindergarten classroom en plein air.

“I had a chalkboard, every single book you can think of, centers for every subject — but it was outside!” she said.

The first session hosted four young participants. After engaging the children in activities under the shelter, Gay took them for a hike — a hike that, she said, changed everything about her approach to early childhood education from that point forward.

“I let them play in the dirt and roll down the hills and I didn’t tell them ‘no’ to anything,” she said. “I realized that we didn’t need these crazy, long lesson plans — because the children are going to show us what they want to learn.”

After that, Ta-Da Learning pivoted to hosting child-led nature adventures and children’s yoga and sensory art classes, both independently and in conjunction with the Centerville-Washington Park District. The couple, now with two young daughters, would pack the family and their materials into the car several times a week to bring their classes to different locations.

“We really threw ourselves into it and it went really well — but it was a difficult way to make a living,” Nicole Gay said.

The Gays had enrolled their own children at Evergreen Children’s Center in Beavercreek, a private childcare center they described as a “really wonderful match.”

“They have woods right next to them, and they’re a WILD-certified school,” Nicole Gay said, citing the Ohio Department of Natural Resource’s nature-based WILD School Site program. 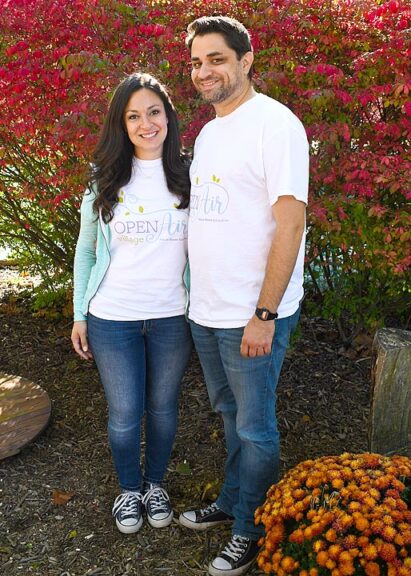 It wasn’t long before Evergreen began inviting the Gays to do sessions with students on a freelance basis, and then soon after, offered them both full-time positions. For the next two years, the whole family made a sort of home at Evergreen. Both daughters attended the school, and Bryan Gay worked as an after-school teacher and maintenance worker. Nicole Gay worked in a variety of positions, teaching toddlers up to elementary school-aged kids, trying to learn as much as she could in this new environment. She even began training under the facility’s director, who was looking to retire, with the possibility that Nicole Gay might take over the position. It looked like the family’s future would be at Evergreen.

And then the pandemic hit. Evergreen closed down, along with every other school and childcare center in the state of Ohio. The Gays were laid off, and the last day they saw their students was March 13, 2020.

“We didn’t know what it was going to be like, so I was joking with them, like, ‘Oh, I hope I get to see you guys again!’” Bryan Gay said.

Nicole Gay added: “We didn’t get to say ‘goodbye.’”

That lack of closure still stings for the Gays. Even as the potential future they had been tending was pulled half-grown out of the ground, however, a new opportunity was blooming: just before everything closed due to the pandemic, Evergreen’s director told Nicole Gay that Children’s Montessori Cooperative in Yellow Springs was closing.

Children’s Montessori Cooperative, or CMC, had been owned and operated by another husband and wife team, Melanie and Edward Ricart, on the Antioch College campus since 2014. The Ricarts had decided, even before the pandemic, that the 2019–20 school year would be their last. After the closing of Evergreen in March, parents whose kids had attended CMC reached out to the Gays, asking if they’d consider taking over.

The opportunity seemed like kismet — but working around the pandemic made the future look fuzzy. The Gays would have to negotiate buying from the Ricarts and becoming licensed remotely, and they were still unsure whether childcare centers and private preschools would open any time soon. 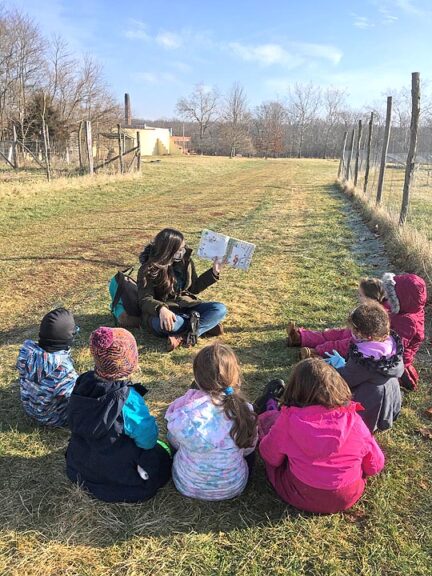 Nicole Gay read to students of Open Air Village on a grassy area of the Antioch College farm recently. Gay started the school last fall and remained open for in-person learning during the pandemic by frequently exploring the out-of-doors. (Submitted photo)

“There were months of waiting between when we were laid off and when we knew we were going to be able to go for it,” Nicole Gay said. “We did a lot of planning and professional development from home, and just dreamed up our perfect center.”

In mid-summer, the Gays were finally able to announce the opening of the center they’d dreamed — and the school’s roster filled up within days. Open Air Village opened with 20 part-time and full-time students.

Besides the Gays, Open Air Village employs one other person, Caryn Fox Diamond, a Montessori teacher who had previously worked at CMC. The Gays themselves are not Montessori-trained, but they said Diamond’s methods seem to work in tandem with their child-led, nature-based style.

Though the school’s first year has gone well so far, the Gays are still navigating the inevitable pitfalls of the ongoing pandemic. In the fall, Greene County was elevated to level 3, or “red,” in the state’s COVID-19 warning system. As a result, the Gays made the tough decision to scale down their classes to only include full-time students whose parents relied on the school for childcare, effectively cutting their roster in half.

“Our job is to keep the children safe, and we didn’t feel like we could do that as effectively if we had more children together,” Nicole Gay said.

Along with decreased class size and increased sanitation practices, they also made the decision to enforce mask-wearing for the students at all times; previously, students had been allowed to go without masks when playing outside, as other area schools and childcare centers had done. Now, students only remove their masks when eating or resting. Nicole Gay said that, although the school’s nature-heavy curriculum meant the students had to adapt to wearing masks for twice as long as they did before, even the very youngest among them have borne the change well.

“They are extremely capable — they all know that they are doing this to keep themselves and everyone healthy,” Nicole Gay said.

Despite the challenges of their first year, the Gays said they’re finding joy in working toward their dream together. They’re looking forward to a future unfettered by the restrictions of the pandemic — one where they can really stretch their roots with larger classes and an after-school program for elementary-age students.

“We’re embracing the small group we have now, but in the future we would love to grow,” Nicole Gay said.

Bryan Gay added: “And if we can get through all this, then the future will be easy.”