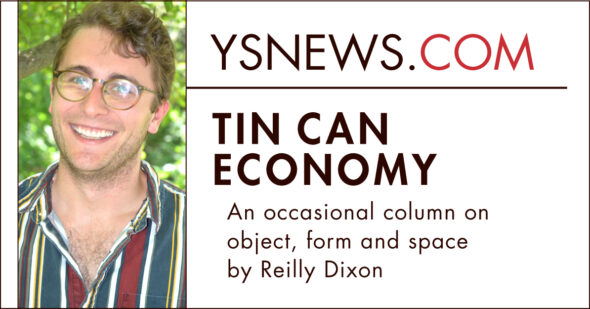 On April Fools’ Day, amid an unexpected flurry of snow, I received my first dose of the Pfizer COVID-19 vaccination at the abandoned JC Penney in the southern wing of the largely vacant Upper Valley Mall. Removed from the context of the past year, this situation would seem absurd — and maybe despite the context, it still is. All the same, I found myself profoundly moved by the experience. I’ll share why.

Upon entering the department-store-turned-vaccination-site, and after getting my temperature taken by the attending personnel, I find myself a part of a crowd — an experience that feels altogether strange and foreign. Given the physical distancing and the well-oiled logic of the site’s crowd control, I have a hard time determining how many people are here. 100? 300? In any case, this is the largest number of people with whom I’ve shared a space since the coronavirus came to town.

In an attempt to wave off the gnawing agoraphobia and impending social anxiety, I keep my mind busy by scanning this crowd. Typically, I see the same four people in any given week, so it’s something of a novelty to be among new company. What strikes me as most apparent is the sheer variety of people. Every conceivable size, color, gender, age, ability and appearance comes to view. Hijabs, hoodies, neon construction vests and neckties are evenly dispersed. All are masked, waiting in one line or another, tapping their toes, checking their phones. Many seem just as bewildered by the whole event as I am.

So, everyone is here under these flickering fluorescent department store lights united by one singular mission: get the vaccine and get on with things. In some strange sense, it’s beautiful to see so many kinds of people momentarily bound by a common purpose, however grim its conditions are.

To be clear, I don’t mean for this to come off as another milquetoast celebration of diversity for diversity’s sake or as though I’m romanticizing the mundane. Here is what I mean: after working for a news organization that reports the horrific numbers of the pandemic week after week, I’ve become somewhat desensitized to the realities of the virus. How can our brains even fathom half a million deaths in the U.S., let alone nearly 3 million in the world? That those people had personalities, families, favorite foods? Seeing the hundreds of people shuffling along in JC Penney that Thursday laid bare what I have occasionally taken for granted: that this virus indiscriminately threatens us all. The existential enormity of the pandemic sometimes gets lost in our day-to-day attempts to keep it all together.

So it goes. To my left, I see a mother smile and squeeze her son’s knee as a nurse effortlessly and quickly jabs his left arm.

The fitting room sign on the wall seems out of place, and I wonder in which department store I’ll have to tell my eventual children it’ll all be OK.

Later, after my own jab and smile, I tell a coworker about the experience and how surreal it was to get vaccinated in the same place I went shoe shopping before second grade. I talk about how the gaudy ’70s orange carpet still had slight impressions from clothing displays, how the pillars still had mirrors and how the wall where the jeans once were still had a Western Americana mural smeared across it. I tell her, in short, it still looked a hell of a lot like a JC Penney.

“Well, you know what a liminal space is, right?”

I do, but I hadn’t yet thought of my trip to the mall in those terms exactly. It makes sense, though. Liminal spaces are the places in-between. They’re not quite one thing, nor are they another; they are spaces in transition or decay. They are both the cracks in the pavement and the school hallway at night.

In a different sense, liminality can describe a frame of mind in flux, such as when one undergoes significant life changes — just as many of the people at JC Penney likely have done over the last year. Or, more concretely, a liminal space can be a physical space that once was a place to buy light-up sneakers, but now is a place to get life-saving medicine.

It’s never comfortable — liminality, that is. (I think of the families who, 16 years ago, huddled together uncomfortably in the New Orleans Superdome, not knowing whether Katrina had washed their homes into the Gulf.) Despite the promise of the COVID vaccine, no one looked at ease in the JC Penney. But then again, what does repose look like during a global pandemic? The collective thought that clung to the uneasy air was, “What next?”

The fitting room sign on the wall becomes an ironic reminder that despite the growing numbers of fully vaccinated people, nothing will feel quite as it should for the foreseeable future — that adapting to a “new normal,” or even grappling with the implications of that phrase, may be like getting used to a pair of ill-fitting trousers.

If the spaces we inhabit tend to reflect our inner selves, and vice versa, then we ought to confront the ways in which we expect our surroundings to adapt to the conditions of a future rife with challenges even greater than COVID-19.

How might we transform our spaces to meet the demands of an increasingly hostile climate, of exclusionary politics, of the next pandemic? Who will these spaces serve? Will they be in a mall?

I’ll get my second dose of the vaccine in two weeks, and even then, I’ll worry myself with these questions. I’ll find myself a part of the crowd again and feel the familiar confluence of relief and uncertainty. I’ll see everyone else sitting with these feelings, and as I think of what the future has in store for us all at the liminal JC Penney, I’ll tell myself, “See? Maybe it won’t be so bad.”

*Tin Can Economy is an occasional column that reflects on object, form and scale. It considers the places and spaces we inhabit, their constituent materials and our relationship to it all. Its author, Reilly Dixon, is a local writer, gardener and amateur winemaker. He works in production and as a writer for the News.

One Response to “Tin Can Economy— All tomorrow’s liminal spaces”