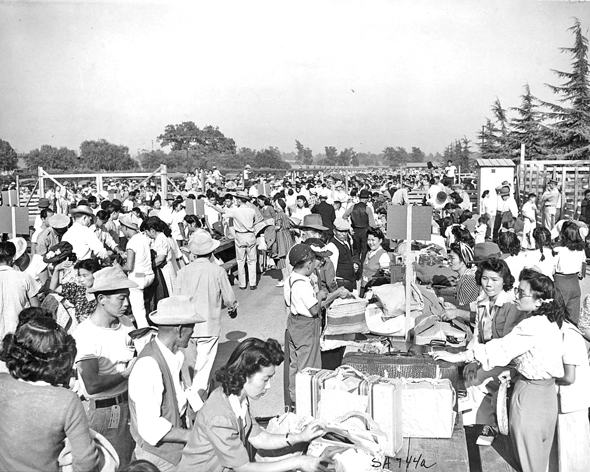 A total of 19,348 people with Japanese American heritage were initially housed at the Santa Anita Assembly Center (Santa Anita Prison) in Los Angeles County, Calif. Here is a busy scene of family groups identifying their hand baggage prior to departing to other prisons. Mari Yoriko Sabusawa (not pictured), a graduate of Antioch College, was one of the Japanese Americans initially housed at Santa Anita. (Photo provided courtesy of the Library of Congress, 1942)

From internment camps to Antioch

It may be hard to imagine, but for more than 112,000 Americans with Japanese heritage, it was reality. From 1942 to 1945, the United States of America imprisoned these individuals, from babies to senior citizens.

But because of efforts by the U.S. military and religious leaders from a number of faiths, some of the young people were able to be released from the prisons to continue their educations. Individuals and organizations within the Religious Society of Friends (Quakers) were among those that helped lead in this movement. Antioch College was one of several hundred colleges and universities that offered to educate American citizens with Japanese heritage.

While many of the participating colleges and universities only accepted one student each, Antioch College accepted at least six students with Japanese American heritage during that time period. Alice Miyeko Kozaki, Lois Nakako Noda, Nao C. Okuda, Mari Yoriko Sabusawa, Fumiko Shitamae and Earl Yohey Yonehiro were among the Americans of Japanese heritage who came to Yellow Springs. This article provides summary profiles of each of these students.

According to the Heart Mountain Sentinel on May 15, 1943, Alice Miyeko Kozaki had been slated to be the valedictorian at her high school in northern California, but she was imprisoned by the federal government before her graduation. She was incarcerated with her parents at the Heart Mountain Relocation Center (Heart Mountain Prison) in Ralston, Wyo., the newspaper, published at the center, reported.

“She was replaced by Victor Klee as valedictorian of the 1942 class of Mountain View Union High School when her family was evacuated to [incarcerated at] a relocation center [prison],” reported the newspaper. As valedictorian, Klee was awarded a gift subscription to Reader’s Digest. But rather than accepting the subscription, Klee asked that the gift subscription be given to Kozaki: “In asking that his subscription be transferred to Miss Kozaki, Klee wrote, ‘Some day she will be a leader of her race in the United States.’” The newspaper concluded by stating that “Miss Kozaki is now attending Antioch College in Ohio on a scholarship from the National Student Relocation Council where she is a reporter for the college paper, ‘The Record.’”

Lois Nakako Noda was from Stanislaus County in California. She was incarcerated in an adjacent county at the Merced Assembly Center (Merced Prison) and then transferred to the Granada Relocation Center (Granada Prison) in Colorado. Both of her parents were born in Japan. Noda was an American citizen, having been born in California in 1924. According to the federal government, she never visited Japan, and she only spoke English.

Nao C. Okuda was from Seattle, Wash. She was held prisoner at the Puyallup Assembly Center (Puyallup Prison) in Washington before being transferred to the Granada Relocation Center (Granada Prison) in Colorado. Both of her parents were born in Japan. Okuda was an American citizen, having been born in the United States in 1925. Prior to the age of nine years, she spent less than six months in Japan, according to federal records. Those same records indicated that she was an Episcopalian and that she was able to speak both Japanese and English, but could only write and read English. Okuda was taken into custody as a prisoner of the United States of America in 1942.

Mari Yoriko Sabusawa (federal records used “Mary” instead of “Mari”) was born in Las Animas, Colo., in 1920. Her father was a melon farmer. As a young person, she moved with her family to Long Beach, Calif. In 1942, as with many other Japanese Americans, she was taken into custody by the U.S. because of her family ancestry. Initially, she and her family were placed at the Santa Anita Racetrack in Los Angeles County that had been transformed into the Santa Anita Assembly Center (Santa Anita Prison) before being transferred to the Granada Relocation Center (Granada Prison) in Colorado. Sabusawa was able to get out of that prison and move to Yellow Springs. She graduated from Antioch College in 1945, and later earned a graduate degree at the University of Chicago. In 1955, she married James Michener, a noted author.

As with Okuda, Fumiko Shitamae was also from Seattle, Wash., and was also held prisoner at the Puyallup Assembly Center (Puyallup Prison) in Washington. She was then transported to the Minidoka Relocation Center (Minidoka Prison) in Idaho. Both of her parents were born in Japan. Shitamae was American citizen, having been born in the United States in 1920. Sometime after the age of 20 years, Shitamae spent less than six months in Japan, according to federal records, to attend school. Those same records indicated that she was Buddhist and was able to speak, read and write both Japanese and English. Shitamae was taken into custody as a prisoner of the U.S. when she was 22 years old.

Earl Yohey Yonehiro was from Placer County (near Sacramento), Calif. He was held prisoner at two California sites: the Arboga Assembly Center (Arboga Prison) near Marysville and the Tule Lake Relocation Center (Tule Lake Prison), located just south of the border with Oregon. Both of his parents were born in Japan. Earl Yonehiro was an American citizen, having been born in the U.S. in 1925. He never visited Japan, according to federal records. Those same records indicated that he was Buddhist and was able to speak, write and read both Japanese and English. Yonehiro was taken into custody as a prisoner of the U.S. because his parents were Japanese and he had Japanese American heritage.

In 1945, the Japanese Americans still imprisoned by the federal government were released from the prisons. In 1976, President Gerald Ford issued a presidential proclamation that terminated the executive order that had authorized the imprisonment of Japanese Americans. In 1988, the federal government officially apologized for the injustices done. As part of that apology, people who had been imprisoned and were still alive were each given $20,000 in reparations.