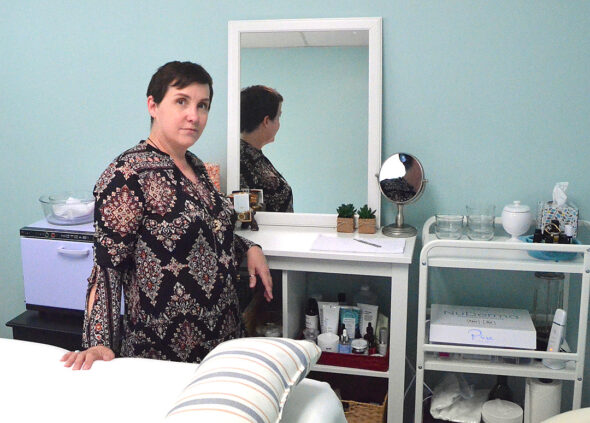 Pictured in her treatment room in the shops at 100 Corry St., licensed cosmetologist and skin care specialist Belinda Stephens is the owner of the new business Beya Skincare Studio. (Photo by Cheryl Durgans)

A fresh coat of mirador blue, a color inspired by the southern coast of Spain, offers a warm and welcoming vibe when first entering Beya Skincare Studio. Nestled comfortably in cozy suite No. 3 at 100 Corry Street, the newly opened business owned by Belinda Stephens will cater to the skin care needs of Yellow Springs residents.

Stephens, a licensed cosmetologist with certifications in skin care and permanent makeup procedures and 33-year veteran of the industry, decided early on that she didn’t want to do hair.

“I started exploring other things we can do with our license, and skin just became more and more what I was interested in,” she said.

Through Beya, Stephens will offer skin care treatments that some residents may have had to travel outside of the village to receive over the years. Beya’s menu offers body and skin treatments. It includes dermaplaning, a popular treatment in which a sterilized surgical blade is used to remove peach fuzz and dead skin cells from the top layer of the face, and Gua Sha, a lymphatic drainage treatment for the face that can reduce puffiness and has a detoxifying effect on the face and neck, according to the skin care services menu found on Beya’s Facebook page. Stephens will offer traditional services such as facial waxing and her own personalized touches to traditional manicures. Called the Beya Mani, it includes dry brushing and Gua Sha on the hand and forearm.

The name for her business was inspired by the pronunciation of the Spanish word for beautiful, bella, which is pronounced like “beya.” Stephens, whose children are of Mexican descent, speaks fluent Spanish. Stephens didn’t want to name her business Bella, only to have people mispronounce the business name by calling it “bell-a.”  She also didn’t want people to think it was a nickname for Belinda.

“If somebody says ‘beya’ and you speak Spanish, you’re going to see it in your mind as bella. So, I went with that spelling because I wanted it to be pronounced right. And when I Googled the word ‘beya,’ it also means beauty in Pakistani.”

When asked why she thought Yellow Springs would be a good fit for Beya, Stephens explained that she offers services not currently found in Yellow Springs.

“For one, there’s nobody else doing what I do, that’s a big one. But also, I think my business model is a good fit for this community because I do things in more of a natural way,”  Stephens said.

Stephens has been told that she is approachable, which helps people feel more at ease around her.

“Beya’s focus is more on wellness and wellbeing, and personal care. My daughter tells me all the time that people are just drawn to me,” Stephens said. “She told me, ‘I don’t know how many times I’ve seen people talk to you for no reason.’”

Stephens sees her business as serving a need for the village and has intentionally kept her prices lower to attract villagers.

“This is something that I am cognizant of as I walk around meeting people and posting things. I am very leery of someone seeing me as wanting to come into the community to start a business just to profit off tourism,”  Stephens said.

Stephens is also excited to have the opportunity to emphasize service, something she’s never been able to implement fully. She’s always worked for other businesses and had to do things their way. For her, service is critical.

“I like the personal touch and I like the relationships with people, the bonds that can form when you have a client that comes in every week or every month — you get to know people,” Stephens said.

Beya will operate in the same building that houses another recently opened business, H & H Studios, which focuses on healthy hair care and healing massage. Stephens reached out to the owners when she decided to rent the space nearby. She sees the skin care work that she does as complementary to their services.

Being community minded, Stephens wants to do her part to support other businesses. “We were talking about the possibility of cross referrals — I can refer people over there for hair, for massage and vice versa,” she said.

Because Stephens is not planning to sell retail products right now, she’s hoping to develop relationships with other businesses in town, including Rosie’s, the health food store.

“I want to test out the skin care products that they carry over there. I know they have the essential oils, which I am good with buying there,” she said.

Stephens believes that being able to refer her clients to Rosie’s would be mutually beneficial. “That’s retail sales for them and easy for my clients, because on the other hand I’d have to say you can get this online. It would be nice to just send them right across the street,” she said.

Stephens also custom blends natural products during treatments based on her client’s individual needs. She incorporates essential oils, mixing them with carrier oils and creams. She intentionally uses products that are as natural as possible. Custom mixing allows her to avoid what she refers to as “all the bad ingredients, the parabens, alcohol and all of that stuff.”

Stephens doesn’t carry nail polish, so if people wanted a manicure with polish, they’d have to bring it.

“I don’t want to invest a lot in having 100 nail polish colors, not to mention I don’t have any place to put it so the natural will do. The buff and shine or the french because that’s easy enough,” Stephens said.

Although Beya is on social media platforms including Facebook and Instagram, marketing for a skin care business that requires close contact can be tricky as the nation begins to move beyond the COVID-19 pandemic. And according to Stephens, being outgoing isn’t natural to her. She prefers the one-on-one interactions she has with her clients.

And yet Stephens, who has been introducing herself to other local merchants, is enjoying the process of getting to know the community, and her appreciation for the village has grown. So far, the effort has superseded her social discomfort.

“I haven’t really met a lot of people yet — but people here have a way about them, and I don’t know if it’s because they’ve lived here so long or if people were brought up here, or if it’s just kind of ingrained in them,” Stephens said.

Beya is Stephens’ first business venture working beyond independent contracting, which often involves renting a chair or a space within another business and having to conform to their business policies.

“This is the first time in my 53 years that I’ve opened a business completely on my own,”  Stephens said.

The idea for Beya was planted during a visit to the Yellow Springs Street Fair in Spring 2016.  Born and raised in Terre Haute, Ind., Stephens first visited the village with her boyfriend, a Dayton native.

“Yellow Springs was one of the first places my boyfriend and I came when we were dating. I just fell in love with it immediately,” she said.

According to Stephens, it was when she saw all the vendors set up at the fair and she explored the businesses in town that the seed was planted in her mind that opening a skin care business in the village is something she’d love to do. However, she waved it away at first.

“Way back then I thought, ‘Yeah, whatever, pipe dream’ but then the pandemic happened, and I found myself not wanting to go back to what I was doing before,” she said.

The cosmetology industry was especially hit hard by the COVID-19 pandemic as salons were ordered closed at the start of the pandemic, leaving thousands of  workers suddenly unemployed for months during the industrywide shut down.

Stephen’s catalyst to step out on her own and away from a management job she had been working for three years at a Dayton area salon was the pandemic.

During the shutdown, Stephens decided to embrace a more fulfilling path for herself.

“The job where I was managing these three years, I didn’t have any intention of quitting, I wasn’t going to leave there, I was going to make the best of it, and do my best for them. But then it was over, so I just decided during that time that I didn’t want to go back,” she said.

The decision to open a business on her own was also a move away from stagnation. “You can be in something day after day, and you’re giving it your all, and it’s easy enough to say tomorrow will be better or next week will be better, and you’ll go on for years like that. And I might have done that,” she said.

Finding a space to rent in Yellow Springs was a smooth process for Stephens. She rented the first location that came up on her Google search in part because she was familiar with the location, “I just checked ads,” she said.

From Indiana to Ohio

Stephens decided to move to the Dayton area when her relationship with her boyfriend became more serious. But she didn’t move right away. Belinda is family oriented and enjoys spending time with her kids.

When Stephens’ daughter graduated from high school in Indiana, she started looking for work in the Dayton area, finding a job managing a salon.

Although Stephens doesn’t have a lot of hobbies, she enjoys reinventing clothes through hand sewn alterations. Stephens also likes the outdoors, and enjoys hiking in John Bryan and Glen Helen.

Being in a relationship wasn’t the only reason she moved to the area. She moved wanting to be part of a community that better matched her political views and personal values. Her first visit to Yellow Springs was during the Spring 2016 presidential primaries.

“I knocked on doors for Bernie in my hometown and it wasn’t easy. Coming to Yellow Springs during that first time was like sunshine on a cloudy day. I’ve since heard the town described as a Bernie island in the middle of a Trump ocean, and thinking back on it, that’s how it felt. Kindred spirits in that regard,” Stephens said.

Stephens also appreciated the village’s “all-out unapologetic support for Black Lives Matter during the protests — and always, celebrating in the streets when Biden was elected president, PRIDE visible on every street in town. We knew without a doubt that villagers would believe the science around Covid-19,” she said.

Stephens currently resides in the Dayton area but wants eventually to live in the village. Her eyes match the enthusiasm in her voice when discussing the possibility. “I would love to live in Yellow Springs,” she said, emphasizing the word love.

Information about booking an appointment at Beya Skincare Studio, along with a complete menu of services, can be found on both Facebook and Instagram.