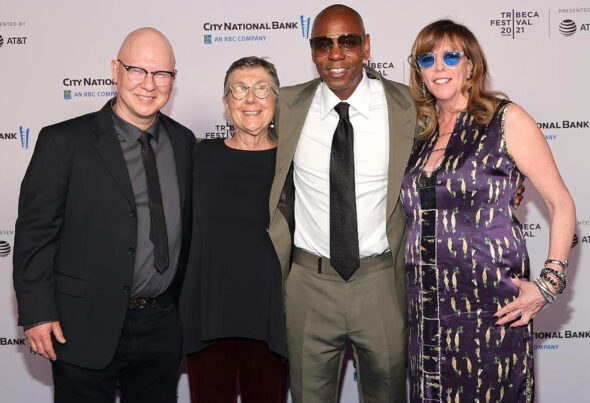 As New York City audiences went back inside theaters last weekend, the first show on the docket was the premiere of a new documentary set in Yellow Springs.

Produced and directed by Yellow Springs-based filmmakers Julia Reichert and Steven Bognar, and co-produced by locally based comedian Dave Chappelle’s Pilot Boy Productions, the film takes a behind-the-scenes look at the rural outdoor comedy shows presented by Chappelle last summer at the Wirrig family’s pavilion just north of the village.

Still listed as “Untitled” up until the premiere screening Saturday, June 19, at the storied Radio City Music Hall, the film held the prestigious closing night slot for this year’s Tribeca Film Festival. A reportedly packed house of nearly 6,000 patrons attended the unveiling of the work now bearing the title “Dave Chappelle: This Time This Place.”

In a phone interview Monday, following what the Oscar-winning couple described as “a whirlwind” weekend in New York, Reichert and Bognar said they look forward to local residents being able to see the film in which the town plays a role. A general release plan has not been announced, however.

The title “This Time This Place” refers to the direction Reichert said she gave their camera crew in gathering footage.

“It’s about this place and this time,” she said she emphasized to the young filmmakers, all associated with Wright State University’s department of motion pictures, where Reichert is an emerita professor and Bognar is an alum and former faculty member. “It’s about Yellow Springs, not the country at large, not Dayton down the road.”

And the concept of “this time” was focused as well, Bognar added, explaining that their intent was to capture a specific moment, not make a historical statement.

The moment proved to be historical, however, as it unfolded amid the coronavirus pandemic lockdown as well as protests following the police murder of George Floyd and other Black Americans. Locally, as the film begins in June 2020, most normal activities were on indefinite hold while local youth stepped forward to lead what became a weekly series of marches and rallies protesting police violence against Black people.

Bognar said the filmmakers were deeply inspired “by the courage [the young people] showed to march down 68, to speak truth to power.”

The impetus for the start of the documentary project, however, was the pandemic and its effects on live performance, specifically comedy shows, as they represent Chappelle’s world.

The idea was Chappelle’s, they said. A News request to Chappelle’s manager for an interview or comment from the comedian was not answered, though the manager forwarded a photograph from Saturday night’s red carpet.

Chappelle came to them June 5, Reichert and Bognar recalled.

Chappelle noted that he’d recently won the Mark Twain Prize in American Humor and Reichert and Bognar had just won an Academy Award for their “American Factory” documentary, concluding, “We’re neighbors. We should work together.”

He told them that he had an idea to present a comedy show in a local field.

The lockdown had been in effect for nearly three months at that point. “Comedians have to get in front of audiences,” Reichert said Chappelle told them. He said he’d gotten permission that morning from the governor’s office, if certain protocols were followed, and he was ready to move forward with giving his idea a try.

“I think it should be documented,” Reichert said he told them.

Bognar said the idea was “irresistible,” although the pair had been looking forward to a quiet summer after a busy winter and spring that included an awards season honoring “American Factory” and the release of a new film, “9 to 5: The Story of a Movement.”

“We love Dave, and we’ve loved Dave for a long time,” Bognar said.

Reichert said their natural next question was when.

In need of a crew, fast, the filmmakers reached out to their Wright State network.

That first night on the Wirrig Pavilion stage, before an audience of about 65 invited guests, “Dave had a very powerful talk about George Floyd,” Bognar detailed. Footage from that weekend then became the short film “8:46,” which was shared widely through social media after Netflix posted it to YouTube. The title referred to the originally reported time, eight minutes and 46 seconds, that Minneapolis police officer Derek Chauvin held his knee on Floyd’s neck, causing his death.

The filmmakers kept shooting as the outdoor shows continued through the summer and into the fall, as Chappelle welcomed a slate of well-known entertainers to the rural setting off Meredith Road. Chris Rock, Jon Stewart, David Letterman, Trevor Noah, Bob Saget, Tiffany Haddish, and regulars Donnell Rawlings, Michelle Wolf and Mo Amer were among the comedians who performed. Musical guests included Common, John Mayer, Erykah Badu and Questlove.

More than 50 shows took place before they came to a close for the season in late September, a week earlier than planned, after an unidentified person associated with the performances was reported to have been exposed to COVID-19.

The ongoing performances were permitted through a temporary variance from the Miami Township Board of Zoning Appeals, or BZA, after the Township Zoning Inspector notified the property owners that they needed to request such a variance in order to host a commercial activity on land zoned for agricultural use.

The hearing in which the request was considered, and subsequently approved, is reportedly included in the documentary.

Chappelle has more recently hosted an additional dozen shows at the pavilion over three weeks from May 26 through June 12, with tickets at $450 for a pair. But the venture has apparently come to its conclusion. While the original zoning variance, which set an end date of Oct 4, 2020, was modified in another BZA hearing to extend into early August this year, the conditions of the modification no longer apply. Specifically, the request cited that the reason for the shows was to provide a place to perform while traditional indoor venues remained closed. The reopening of theaters across the country erases that need.

Making of the film

“We did not anticipate what was going to happen,” Bognar said of the events that transpired throughout summer 2020. The filmmakers’ purpose was to document what unfolded. Although Chappelle served as co-producer, Reichert and Bognar had directorial control, Bognar said.

“We set the style and the tone. We shaped the film the way we wanted.”

Asked if this was their first documentary initiated by the subject of the film, Bognar pointed to other projects, including “Sparkle,” which focused on Sheri “Sparkle” Williams, a longtime dancer with Dayton Contemporary Dance Company, commissioned by DCDC; and “Making Morningstar,” with the Cincinnati Opera.

“We love making films about people who take their art, their craft, their work very seriously,” Bognar said. The Chappelle film gave them the opportunity to enter the world of comedy, he said.

“The real gift for us was getting to be inside the culture,” he added.

A quality that ties all their films together, Reichert said, is an attempt to “drill deep down” and show the humanity of their subjects. “We don’t try to go broad,” she said, noting that “The Last Truck” was about the closing of a single factory; “American Factory” features a Chinese business man opening a glass factory in southwest Ohio; and “A Lion in the House,” focused on several families whose children were being treated for cancer at the same facility.

Finishing the new film in time to debut at the Tribeca Festival “was a huge effort,” Bognar said, adding that they’ve “never made a big film like this in one year.”

The pair worked on it up until the Sunday before its premiere.

Entering it in the Tribeca Festival was also Chappelle’s idea, as was its screening at Radio City Music Hall, which had been closed for 15 months until its reopening for the premiere.

“Dave sometimes sees around a bend before most of us even see a bend coming,” Bognar said.

When the Tribeca board accepted the film, and scheduled it to close the film festival, “We were thrilled,” Bognar said.

The experience, then, of witnessing the screening was “something just out of this world,” he added. “The feeling in that room. We’ve never experienced anything like that. The laughter  — you could feel it in your chest.” Premiering the film on Juneteenth was also meaningful for the pair.

The approximately 6,000-seat hall was the largest space in which they’ve shown a film, they said. The Schuster Center in Dayton, at 2,300 seats, may have previously been the biggest, Reichert added.

She suggested that the energy Saturday night was heightened by excitement to be in a theater setting again.

“There was so much hunger to be out. Everyone in the room was so happy. People were hugging.”

Media reports of the evening, noting that patrons had to show proof of vaccination to enter, also echoed the positive response Reichert and Bognar felt. A variety of media outlets weighed in on the event, many marking the theater’s reopening as a momentous moment in the city’s life.

3 Responses to “‘This Time This Place’— Chappelle documentary debuts”