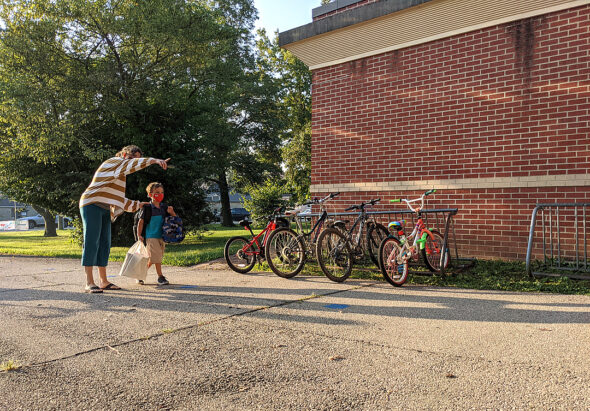 On Monday, Aug. 23, the early-morning sun streamed across Mills Lawn and the horseshoe at Yellow Springs High School/McKinney Middle School as students donned their backpacks and returned to school — the first new academic year starting in person since 2019. Naomi Bongorno showed the way to her first grader, Simon. (Photo by Megan Bachman)

School is in session.

The first day of classes for Yellow Springs Schools was Monday, Aug. 23. And while the start of a new academic year is typically cause for heightened emotion — whether excitement or dread — this new start contains more feeling than typical years past.

The COVID-19 pandemic has disrupted local schooling since it hit Ohio in early 2020. Schedules were upended, and learning moved online for an extended period.

“We’re excited that it’s happening,” she said of the Mills Lawn staff’s feelings about the opening.

But though the district’s school doors opened as planned, and the halls are abuzz with activity, the ongoing pandemic remains close at hand with a new surge in cases, many related to the Delta variant. And that means the normal act of returning to school is still not fully normal. Everyone is wearing a mask indoors, as mandated by the district, and efforts are being made to maintain a physical distance of at least three feet in the buildings, among other measures.

According to Superintendent Terri Holden, nearly 100% of district staff and a majority of students who are eligible have been fully vaccinated.

“We’re trying to do every level of mitigation,” she said in a phone interview earlier this month. Details of the district’s COVID-19 protocols are posted on its website, http://www.ysschools.org.

While responding to the ongoing contingencies of the pandemic, the district is also starting the new year with a focus on determining how the pandemic and the experience of remote learning has affected students not only academically, but also emotionally and socially — and then addressing the effects.

“We want to support the kids,” Holden said.

The effort will begin with a series of assessments to establish where students are and what they may need, she said. Staff members are working to match the curriculum to revised state standards, “and we’re doing a refresh with everybody on Project-based Learning,” she added.

In addition, counseling services are being bolstered with increased hours for counseling staff, Holden said.

And amidst these efforts, the district is welcoming two new administrators, 12 new teachers and two new main office employees, all filling positions vacated since the end of the last school year.

“It’s a lot for us, on top of COVID,” Holden said of the staff turnover. Before the pandemic, the district went several years with less than a handful of new hires to replace employees who left the district.

At the same time, she said she’s happy with the experience, talents and potential of the incoming staff.

“I think we have a great team,” she said.

Among the new faces in the district is Principal Megan Winston at Mills Lawn.

Winston was hired following a search last spring to replace Michelle Person, who resigned, after a year with the district, to support her family business. A native of Xenia, Winston comes to Yellow Springs after five years as one of two assistant principals at Xenia High School. Before that, she served in administrative positions in the Dayton Public Schools system, including as principal at the Horace Mann Elementary School. Her classroom experience includes teaching math at Beavercreek High School.

“The safety and health of the kids and staff is going to remain one of our top priorities,” Winston said, describing her focus as school begins.

At the same time, she said she wants “to find ways to provide some normalcy to students, families, teachers and support staff.” Part of that effort will come in bringing forward important traditions while merging them with new practices introduced during the pandemic, she said.

She also wants to work on “understanding the effects that remote learning has had, and making certain we have the resources and programs we need to support our families.”

Winston believes that offering support, not only to students and families, but also staff, is one of her main responsibilities as principal. For staff, that means providing the training, professional development programs and resources they need to do their best work, she said.

Collaboration is also important to her — “that we make sure we are working as a team,” she said.

Noting that eight of the district’s new teachers are at the elementary school, Winston said that each newcomer has been paired with a veteran mentor teacher to help with their acclimation to the school and its culture.

She has also formed what she calls the “Sunshine Committee,” with the sole focus of providing “little surprises” for staff. Separate from the activities of the Parent Teacher Organization, the Sunshine Committee is a chance for colleagues to “recognize, appreciate and acknowledge” their peers.

Winston said she considers herself to be “a hands-on administrator” with an open door for parents, students and staff.

“I love walking into a building with teachers and students every morning,” she said. “Technically, I love being here when they walk in,” she corrected herself with a laugh.

She said she wants students to see her as approachable.

“If kids are playing kickball, it’s not uncommon for me to kick off my heels and play with them,” she said. “I think it’s really important for the kids to see me as a human being.”

She described the school’s response to COVID-19 as “fluid,” needing to make adjustments as circumstances change. “We’re being creative,” she said, adding that she’s ready to make changes if something isn’t working. 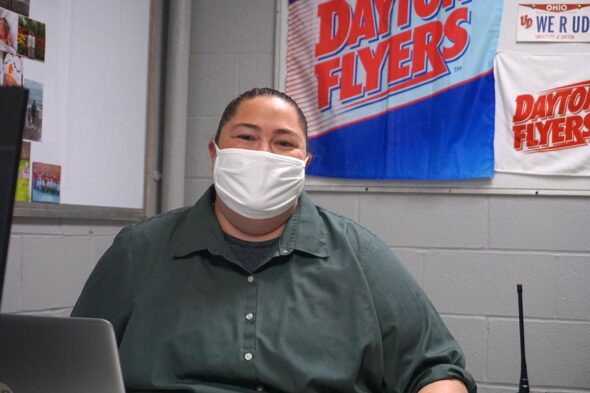 At the middle/high school

An administrative change has taken place at McKinney Middle and Yellow Springs High Schools as well.

Joy Feola has joined the middle/high school as the new assistant principal, replacing Cameron McCoy, who left the district this summer.

Feola comes to Yellow Springs from Dayton Schools, where she was an assistant principal at the David H. Ponitz Career Technology Center and before that at Thurgood Marshall High School.

A native of Cleveland, she moved to the area to attend the University of Dayton, where she earned her bachelor’s and master’s degrees.

“And then I just stayed,” she said in a recent phone interview.

She said she’s looking forward to getting to know the students, and that’s her focus as the new year begins.

“My plan is to get into classrooms and just interact with students in the classrooms and lunchroom, and get to know the teachers better as well,” she said.

She said her responsibilities as assistant principal include handling “some discipline,” as well as attendance, data analysis and “leading some team meetings.”
Feola said she was attracted to Yellow Springs because of “the community atmosphere.”

“Yellow Springs, the village, has a reputation nationally … as an open and welcoming community that’s active,” she said. She likes that.

Principal Jack Hatert said he welcomes the new personnel in his building.

“It’s an opportunity for fresh ideas,” he said of the staff additions. “I feel very fortunate with the staff that we have,” he said. “I don’t take that for granted.”

Hatert said one of his main areas of focus this academic year is filling in the gaps that occurred when the students were learning remotely online.

“We lost so much last year,” he said. “And we lost a lot academically. We’ll chip away on that all year,” he added.

Part of that work will involve strengthening PBL, he said, noting that a number of teachers and administrators attended PBL training over the summer.

For the social-emotional piece, he feels that the pandemic, as “a common experience for all of us,” offers a connection for understanding each other and fosters school unity.

“It’s been different for each person, but we’ve all gone through something together,” he said.

The school will stress “positive behavior intervention and support,” a disciplinary approach introduced before the pandemic, he said.

The goal is to support “responsible, respectful, problem-solving” behaviors.

He said the pandemic’s disruptions also offered an opportunity to re-evaluate “old systems” and imagine new ways of doing things.

An example of putting that thinking into motion was the elimination this year of the traditional all-school open house in favor of hosting an orientation for seventh graders and a separate welcome for other students new to the campus.

“It was amazing,” Hatert said of the orientation, which included team-building activities and a scavenger hunt through the school.

In reference to welcoming new students, Hatert said, “I got to talk to every student one-on-one, which I could never do during an open house.”

One thing that will stay on the schedule is the annual Into the Wild biking and camping trip with the entire seventh-grade class, though there likely will be some accommodations related to pandemic precautions.

“I can’t think of anything that would be a safer field trip,” Hatert said.

All in all, the principal is excited about the new year.

“I think we’re going to have a great year,” he said.