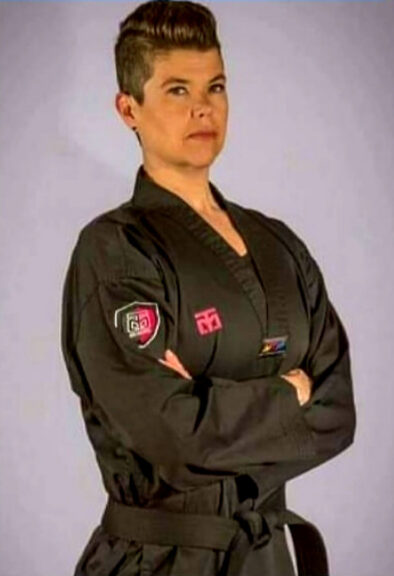 Master Christina Bayley, owner of Total Taekwondo Fitness, is hosting a self-defense class in Yellow Springs on Aug. 21 for ages 13 and up. Students will learn defense tactics and the best time to use them. (Submitted photo)

Walking in the Glen with headphones; heading to Tom’s while checking the latest posts on Twitter; heading home after a night of dancing at the Gulch: these everyday occurrences could leave people vulnerable to assailants.

To remedy this, Master Christina Bayley wants to teach Yellow Springs residents to defend themselves with some common sense strategies. Bayley, who splits her time between residences in Yellow Springs and Kettering, is the owner of Total Taekwondo and Fitness in Kettering.

Bayley’s self-defense seminar will be offered to villagers aged 13 or older on Aug. 21 from 3-4 p.m. at the John Bryan Center for $20. The class is open to 50 participants on a first-come, first-served basis.

Bayley brings with her a 30-year background in Taekwondo and other martial arts. She began classes when she was 6 years old, starting her on a journey that would find her qualifying for the Olympics in 1996. After fighting in over 20 countries, Bayley started her own business in 2000 where she trains the U.S. National team and offers classes that range from kids martial arts to Olympic sparring to self-defense for women.

Bayley’s upcoming local class will instruct students on knowing when and how to defend themselves. The class’s August date is intentional, she said, as many students will return to campuses where assaults are often reported — 1 in 5 women will be sexually assaulted in college. In a phone interview, Bayley explained her vision for the class:

“I know that many people, women especially, feel like they are not strong enough to stop an attacker. I want to empower people with the knowledge that anyone can use their body for defense,” she said.

Bayley’s class is only the latest offering of self-defense and martial arts classes in the village, including a series of To Shin Do classes at Antioch with Johanna Kohout, an Aikido studio, which was located in the Union School House, and various QiGong and Tai chi classes.

Bayley’s self-defense offering for the village evolved from a course currently offered at Total Taekwondo and Fitness. Geared towards women, the class teaches practical maneuvers to impair assailants so that escape is possible.

“I often have students who are survivors of domestic violence or assault. Teaching this class offers people a chance to be proactive,” Bayley said.

Living part time in Yellow Springs, Bayley recognized a need for common sense self-defense for villagers after several local friends and students inquired whether she would teach a class in the village. She hopes that she will be able to teach recurring self-defense classes to the community, with the possibility of having smaller group sessions for women or members of the LGBTQ+ community.

Of course, Bayley’s aim is not to teach people to be violent. She wants them to feel confident that they can ward off an assailant.

“I don’t want to teach people to recklessly attack others when they can easily call for help or escape. De-escalation is always best, but if that isn’t possible, I want people to feel that they can fight back,” Bayley said.

Over the course of an hour, students will learn how to assess a situation, gauging whether or not violence is necessary, or if running away is an option.

“But take me for example,” Bayley said, “I’ve had two hip replacements. I can’t run, so I have to fight.”

After a clear command to back off and a call for help, students will learn to use basic combative moves such as palm strikes, elbow strikes, and eye-gouging. If time allows, members of the class will have the option to move on to choking and other grab defenses. Bayley encourages participants to observe if they are not comfortable with hands-on instruction.

“I’m hoping that we can cover several things, but I think it is important to make sure people are comfortable and aware of their limits and triggers,” said Bayley.

Though the class discusses violence and using it to ward off an attacker, Bayley wants it to be a positive experience. She expressed her hopes for the event, saying:

“I want folks to come out, have fun, feel empowered, and see how strong they really are!”

One Response to “Taekwondo expert to teach self-defense class”