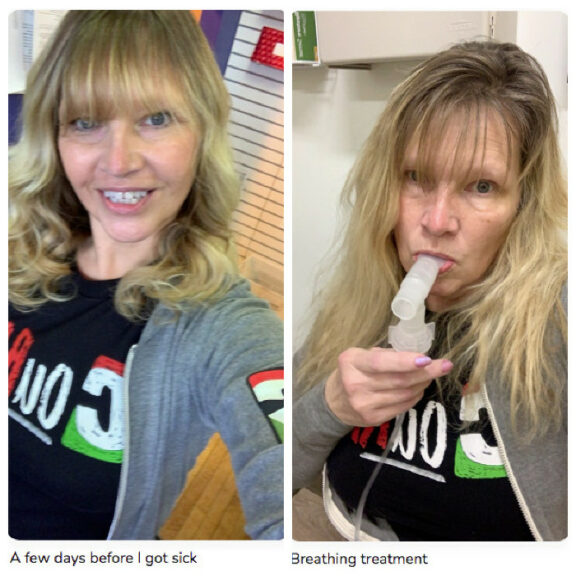 Lisa Watson, a five-year employee of the YS Post Office, has been documenting her journey with long COVID for several months on a blog with both text posts and photos, including the ones displayed here. The photo on the left was taken a few days before Watson began experiencing COVID symptoms; the one on the right — in which Watson is dressed in the same outfit — was taken as Watson received a breathing treatment after being diagnosed with COVID-related pneumonia. (submitted photos)

More than a year into the COVID-19 pandemic, most Americans are familiar with the most common symptoms of the illness caused by the coronavirus: fever, shortness of breath, sore throat, persistent cough, and loss of taste and/or smell. Many are also well-versed in the potential recovery time for those who contract the illness: symptoms can last anywhere from two to six weeks.

But what about when the symptoms of COVID linger, unfurling beyond two to six weeks into long months? What happens when those symptoms shift and evolve?

These are the questions being asked by those who are beginning to adjust to life with post-acute sequelae of COVID-19, known colloquially as “long COVID” or “long-haul COVID.” Among those living with long COVID are Lisa Watson, a Jamestown resident and employee of the YS Post Office.

“It was Dec. 10 [2020] when it started,” Watson told the News via phone recently. “I went to work, came home, had a normal day. Then I took a shower that night and just hit a wall — I remember sitting down on the dining room floor because I just had to sit down immediately, and I told my daughter-in-law to stay back.”

“I slept for the next three days straight,” she added.

Watson said she saw a doctor via telehealth within a few days of receiving a positive COVID test, and experienced all the tell-tale symptoms of the illness. After four weeks, however, she was still having trouble breathing, and went to see her doctor in person. She was diagnosed with COVID-related pneumonia, but also complained to her doctor of experiencing “brain fog.” Watson’s doctor told her she was a “textbook case” for long COVID.

“I didn’t believe that at first — it hadn’t even been that long yet,” Watson said. “I thought [the brain fog] was all in my mind, and I just wanted to go back to work.”

“Brain fog” is a commonly reported symptom of long COVID, according to a report by Scientific American in July, along with circulatory and respiratory issues and fatigue — all of which Watson said she’s experienced in waves during her seven months with COVID. Reports on who is most likely to be affected by long COVID vary — Harvard Medical School reported that it affects mostly younger patients, while the Mayo Clinic says older patients are more susceptible — which is demonstrative of how little is yet known about long COVID. Severity of initial symptoms doesn’t seem to affect whether a person will eventually develop long COVID symptoms. According to the same Scientific American article, several studies have found that more than a quarter of those who contracted COVID are living with long COVID. In late July, the U.S. Department of Health and Human Services and the Department of Justice announced that long COVID could be considered a disability “if it substantially limits one or more major life activities.”

“My doctor told me there are others out there going through the same thing as me, but that every situation is different,” Watson said.

And every day is different, she discovered. For that reason, Watson started keeping a loose record of what she was experiencing: symptoms, tests, weird quirks, her feelings. She would send updates to family or post them to her Facebook page. At the same time, Watson said, she also started a blog, writing about past trips she’d taken to Las Vegas, Nev., and Cabo San Lucas, Mexico, as a way to occupy her time — and her mind — during her lingering illness.

“I was using it as an escape to try and get away from what my real life was, I think,” she said.

Her record-keeping and her blogging would soon converge into a single project, however, when the daughter of an acquaintance found out that she, too, had contracted COVID. The acquaintance messaged Watson, asking a bevy of questions on what to expect, and Watson found herself referring to her previous records.

“So eventually I took everything [from the travel blog] down and replaced it with all the notes I’d posted or shared with family and sent her the link,” Watson said. “I wanted her to know that certain things [about COVID-19] are normal, because a lot of times, the stuff I went through, I didn’t know what was happening to me.”

The blog includes Watson’s early reports, as well as continued writing about her symptoms and doctors’ visits. Photos of electrocardiogram readings and oxygen levels and puzzling physical ailments that may be related, like rashes, mysterious bruises and skin discoloration, are also included. Most often, though, Watson writes about the confusion and frustration she feels about her lingering symptoms.

“It’s been harder to get the right words to come out,” she wrote on July 9. “I know what I want to say but have to go slow and concentrate to get them out. I do better with typing unless I’m shaking too bad to hold my phone or hit the right keys. … I’m still staying positive and my emotions are good. Hope to share some good news with you soon.”

Watson reiterated her difficulty with and anxiety about lingering “brain fog” when she spoke to the News, occasionally struggling to grasp the phrase she wanted. She said it’s perhaps the part of the long COVID experience that disheartens her the most.

“I used to work in IT for 10 years — used to be able to set up servers and do phone lines,” she said. “I’m a fairly intelligent person, and then to go from being able to fix things and figure things out to not being able to start my dishwasher that I’ve had for 10 years — it’s just so frustrating.”

Also frustrating, she said, is not knowing when she’ll return to her normal life — if ever. She had originally planned to go back to work at the YS Post Office — where she received a promotion before her illness last year and would have celebrated five years of working this year — in June.

However, as some symptoms persisted and others worsened, that plan was abandoned for the foreseeable future, which was painful for Watson, as she very much wants to return to her “dream job.” Still, she said she looks forward to maybe getting some answers over the next few months as she undergoes neurological scans — though she said the physicians she has seen are still looking for clarity themselves.

“[My doctor] told me, ‘I don’t know if I’m going to have answers for you,’” Watson said.
Even if answers aren’t forthcoming, Watson said writing and maintaining her blog has been its own kind of remedy, in its way.

“It’s been very therapeutic for me,” she said. “Letting it out and letting everybody know what I’m experiencing, it helps. … It’s almost like it makes it real, it gives it merit.”

Watson said she will continue to document her experiences with COVID, but that she ultimately hopes the focus of her blog will eventually shift back to her original passion.

“Once I get better, if people are still following along, I’d like to change it back to a travel blog,” she said. “That’s my dream — to travel and write about things as they happen.”