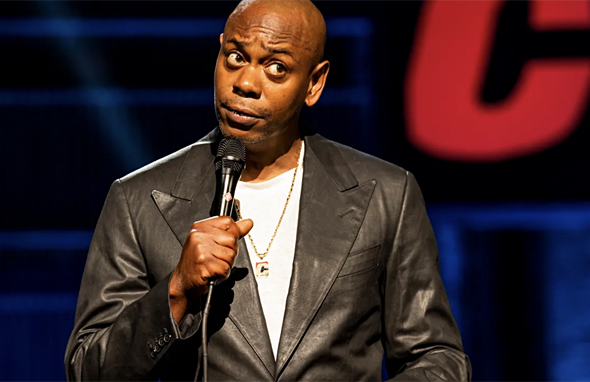 "The Closer," Dave Chappelle's sixth and and most recent stand-up comedy special with Netflix premiered on Oct. 5, 2021. (Photo courtesy of Mathieu Bitton/Netflix)

Opinion | Dave Chappelle’s views on gender are problematic and hurtful

The following commentary was originally published as a letter to the editor in the Oct. 14, 2021, issue of the Yellow Springs News.

It is rare for the News to post a letter to the editor on its website, and will likely continue to be so. However, its author — Iden Crockett — like Dave Chappelle, is a village resident. As editor-in-chief, I believe that the voices of Black, trans women are lost in all the media hoopla over Chappelle’s Netflix special, “The Closer.” Crockett’s is one of these voices.Whether you agree or disagree with Chappelle, the world knows who he is, and he will continue to receive extensive media coverage regarding his life and commentary on social issues. I believe Crockett should have the same opportunity to share her own perspective given the spotlight placed on her very existence as a human being.
—Cheryl Durgans, editor-in-chief, Yellow Springs News

I am a transgender woman living here in Yellow Springs and I would like to address the recent comments that my fellow resident, Dave Chappelle, has made regarding transgender people.

These comments, made as part of his recent Netflix special, “The Closer,” were aimed toward trans women in particular. I don’t need to summarize the special here, nor do I wish to address everything said during the performance. I am not here to begin an argument with Mr. Chappelle or anyone else. What I would like to do is use one of these problematic statements to illustrate the biggest problem with discussions on gender.

I interpreted “The Closer” to be a defense of Dave Chappelle against the allegations of homophobia and transphobia that have been leveled at him in recent years. Watching it felt like I was watching the closing argument in a court trial. Despite an obvious effort on the part of Mr. Chappelle to address the criticism, he has missed the point. The evidence for this is in a quote from the performance, which was cited in a USA Today article. Chappelle said: “I’m Team TERF. I agree. I agree, man. Gender is a fact. … They [trans-exclusionary radical feminists, or TERFs] look at trans women the way we Blacks might look at blackface.”

This may appear to be a clever simile on the surface — it certainly is effective in gaining sympathy for the TERF worldview — but it is an absolute airball if the net we’re aiming for is the truth. These quotes make it obvious to me, as a trans woman, that neither Dave Chappelle, nor those promoting the views of TERFs, understand at all what is to be a transgender woman.
I have already identified here as a trans woman. Let me take this moment to say that I am also Black. I am a Black trans woman and I understand how “we Blacks” might view blackface. I view it as a deliberate mockery, by white people, of a Black person. It is the exaggeration of a physical feature, in this case skin color, in order to make Black people appear clownish and inferior to the white people in the audience, thereby reinforcing the view of Black people as inferior in American society.

I don’t know how a white person views blackface because I am not a white person. I can infer, from the reactions of the white people that I am close to, that they feel the same way that I do. Mr. Chappelle and the people that he is defending know how they feel when they see a transgender woman. They do not know how it feels to be a transgender woman hearing influential people make these sorts of statements. They could infer, if they felt like doing so, how we felt about it by observing our reactions. My reaction to hearing my life, my day-to-day existence, compared casually to one of the most infamous and widely condemned racist traditions in the country, was shock. It was outrage. It was heartbreak. Knowing that this is the way people in my community — and possibly now the entire country — see me has absolutely broken my heart.

This is the problem — The Problem — because for one to understand a person who is different from them, one must first understand that they will never see the world in the way that that person does. You will never know how it feels to be them because you will never be them. That is fact and it is inescapable. The only way to bridge this gap in understanding is to close your mouth, open your ears, and listen to what they tell you.

Mr. Chappelle must understand this, at least in part, because he states multiple times during “The Closer” that people in the trans community have not been listening to what he is actually saying. I have been listening. By endorsing the worldview of trans-exclusionary feminism and comparing trans female existence to performing in blackface, Dave Chappelle has told me, and the world, how it feels to be Dave Chappelle when he sees a trans woman. He told me that he feels that I am deliberately mocking women in order to reinforce the view of them as inferior. He told me that, when I get dressed and take my kids to Dark Star to buy Pokémon cards, I am performing and that my performance is offensive to women. Please read that aloud. Read it and try to hear the words in my voice. Listen to what I am saying because I am telling you how a transgender woman feels when she hears a well-respected and internationally influential person tell the entire world how he feels about her.

Let me say to Mr. Chappelle, personally: Dave, I have always been a fan of your work. I am still. You have brought me to tears laughing with your stand-up and crying with your pointed social commentary on race and police violence. I count you as my neighbor and am proud that we are a part of the same community. I saw you outside of Dark Star not long ago and I know you saw me. I was with my kids. We were buying Pokémon cards. Did I really offend you? When you saw me, did you see a person purposefully mocking women? Or did you see a person out enjoying the day with her family and trying to live her life? I am not performing. I am not mocking. I am simply living.

I am well aware that these quotes are just a fraction of your special. I have watched it. I realize that this performance is an attempt to make peace and to find understanding. I can infer, from the mere existence of this work, that the criticisms of you have been hurtful to you. I would love to be able to say that everything is alright now. We aren’t there yet. I don’t know what it is like to be famous. I don’t understand how it feels to have everything you say picked apart and judged and I don’t know what it is like to influence national opinion with something as simple as a joke. I only know what it is like to be treated as a joke and to have the national opinion turned against you. Do you want to know what that is like?

*Iden Crockett is an artist, writer and longtime Yellow Springs resident. She lives with her wife and three children, spending most of her time working and writing in her home studio.