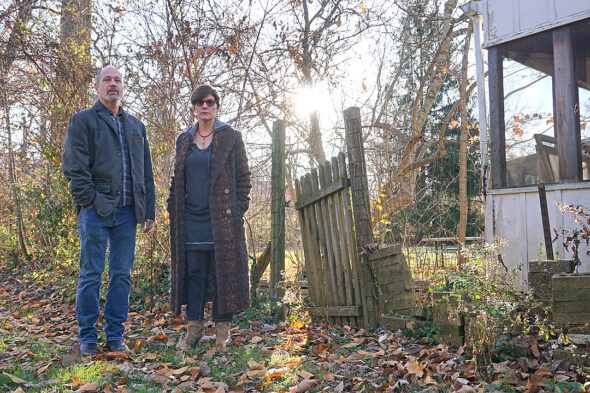 Writers Robert Freeman Wexler and Rebecca Kuder, pictured on the property of their Yellow Springs home. Kuder’s debut novel, “The Eight Mile Suspended Carnival,” and Wexler’s new story collection, “Undiscovered Territories,” were released this fall, and the pair will read from them at a virtual performance event on the Emporium’s Facebook page on Saturday, Dec. 11, beginning at 7 p.m. (Photo by Lauren "Chuck" Shows)

In general, people like to classify things — to sort them and understand them at a glance. It makes life simpler. Readers of fiction are no exception to this desire: this book is a Romance, that one’s Horror, that one’s Science Fiction.

Both Kuder and Wexler, who are partners, released new books this fall: Kuder’s debut novel, “The Eight Mile Suspended Carnival,” from What Books Press; and Wexler’s short story collection, “Undiscovered Territories,” from PS Publishing. The pair will read from their new works during a livestreamed event on Saturday, Dec. 11.

Kuder and Wexler spoke to the News in early fall from their village home. Sipping tea on their porch, they spoke about their writing journeys and the avenues that led their work to sometimes eschew traditional genres.

Wexler, originally from Texas, said he fell into writing in college “by accident.” In a freshman English class, he was given a creative writing assignment that tasked him with introducing the reader to a new character. At the time, Wexler was reading a serialized novel in The Magazine of Fantasy and Science Fiction, and the section of the novel he was reading happened to introduce a new character.

“And I discovered that you can learn how to write by reading things — and that I liked writing,” he said.

Wexler went on to earn a degree in journalism, but found that the realist approach required by news writing didn’t scratch his particular creative itch.

“Everything I write has some non realistic component,” he said.

In 1997, Wexler participated in the six-week Clarion West Workshop, geared toward writers of fantasy, science fiction, horror and the broader genre of speculative fiction. Though these kinds of works, like Wexler’s, also take leave of realism in one way or another, he said the workshop’s aims weren’t quite his own, either.

“There was one story where the feedback was to take out some of the more experimental things I’d tried, so I did,” he said. “About a year later, I looked at it and thought, ‘No, I want to put those back in,’ and I did — and then it got published.”

He added: “I did realize eventually that who I am as a writer — who I need to be — doesn’t necessarily fit that mold.”

The 14 works comprising Wexler’s latest book, “Undiscovered Territories,” represent more than 20 years of Wexler’s writing, with its oldest inclusion, “Travels Along An Unfurling Circular Path,” having been written in the 1980s; it was Wexler’s first published work.

The story, which has been reworked since its original publication, features an unnamed character roaming through a world of explosive color and sense and an increasingly cyclic — and dubious — reality. Wexler writes in the book’s notes that the story was inspired by an interactive fiction computer game in which a player types commands and the game generates its world based on those commands.

The book opens with “Tales of the Golden Legend,” a story that helps set the tone for all the work to follow — its title references a painting by surrealist René Magritte depicting flying loaves of bread viewed through an open window. In the story, a man discovers he can talk to bread, which Wexler writes as a sort of hive-minded organism nearly as old as earth itself, but with each loaf displaying its own persona.

“Yeast was the first being on a planet of rocks and sea,” says a loaf of rye. “Therefore all life is bread.”

Wexler said the collection’s unifying theme can be summed up by its epigraph, written by Welsh author Arthur Machen: “There are still, depend upon it, quaint undiscovered countries and continents of strange extent.”

“It’s tied into what I was doing when I ended up looking back at these stories,” he said. “Some are set in New York City; some in a sort of unnamed, I guess you could say ‘fantasy land’; and then some are set in a small town that isn’t Yellow Springs — but is, somewhat.”

When Wexler was interviewed by the News in 2003 after the publication of his first novella, “In Springdale Town,” — which also appears in “Undiscovered Territories” — he described his work as “literary fabulation … ‘slip stream’ surrealist fantasy in a real-world setting with magic intruding on it.” Nearly two decades and several books later, he said he’s less likely to attempt to describe his work at all.

“When I got started in writing, the borders were more rigid — they’re less so now,” he said. “Which is a roundabout way of saying ‘I don’t know [how to describe it].’”

Kuder offered a possible description: “Someone did once write a review that called [his] fiction ‘Wexlerian’ — it’s its own thing,” she said.

Kuder’s familiarity with Wexler’s work — and his with hers — is par for the course for the pair.

Kuder added that their deep knowledge of one another’s work makes them both effective writing partners — and critics.

“We understand the context of what the other is writing, but we both have little quirks and things we do that are repetitive problems,” she said. “So we can say, ‘Oh, you did that again!’”

Several of Kuder’s own short stories have been included in anthologies of “weird fiction,” a broad term that includes tropes from supernatural, horror and fantasy genres. With authors as diverse as H.P. Lovecraft, Joyce Carol Oates, Octavia Butler and James Joyce having written fiction labeled “weird,” the category’s boundaries are elusive.

Kuder said the earliest influence she can trace to her particular fiction style was a short film she saw in high school. In it, a businessman on a dark stage puts on his business attire in front of an invisible, laughing audience.

“Then he walks off and they’re applauding and going crazy, the lights come up — and the audience is all clowns,” she said. “It was so absurd that I wrote it into a story, but at the time I didn’t know there was a place for me in terms of writing things that were weird or outside of realism.”

A village native, Kuder said her love of storytelling began early as a student writing storybooks at the Antioch School.

“I had a lot of really great early encouragement from my parents, from [former News editor] Don Wallis … and also knowing people like [author] Virginia Hamilton who were also very supportive of me,” she said. “And so I sort of always wanted to be a writer.”

Despite that early knowledge, Kuder said that she entered college with the intention of studying to become a teacher — until, during her first term at Earlham College, she auditioned for a play.

“And it was amazing — so I decided to study theater,” she said. “After college, I was sort of headed down the theater path.”

Kuder said she soon realized the difficulty of that particular path and left it, working a series of other jobs at nonprofits and in community health. She began writing again and, after moving back to Yellow Springs from Seattle, she took part in the Antioch Writers’ Workshop, and later earned her MFA from Antioch University Los Angeles. She also fulfilled her college intention of becoming an educator, having taught creative writing classes and workshops at Antioch College, Stivers School for the Arts, Antioch Writers’ Workshop and Yellow Springs Schools, among others.

Despite the self-described “detour” of studying theater, Kuder said she doesn’t consider that time wasted, as her study of theater ultimately went on to inform the way she writes.

“When I started looking at what I was trying to do in writing … and how I was thinking about revision, I realized I was sort of thinking of it in terms of theater and stage management,” she said. “I was thinking about props, characters, intentions — and I was writing all these things out.”

Like Wexler’s story collection, Kuder’s debut novel, “The Eight Mile Suspended Carnival,” represents years of work; she said the book’s “first inkling” began about 20 years ago. The novel follows a woman who is thrown by a tornado into the middle of the titular carnival, and awakes with no memory of who she is. The carnival’s inhabitants — the “carnies” — take her in and name her “Mim.” As she recovers, Mim begins to discover that, though she’s lost her own memories, she’s able to experience the memories of those around her.

“As I was working on the novel, I thought of it as a sort of ‘Dust Bowl noir,’ and it’s within this context of the carnival where perception is always shifting and being played with,” Kuder said.

Over the course of the novel, Mim reckons with losing and gaining identities in short order and, while doing so, carves a place for herself among the carnies. Through Mim’s burgeoning agency at the carnival, the novel balances on considering families that are built rather than born and on confronting personal trauma.

“One of the facets [of the novel] is that most of the people in the carnival are orphans in some way, whether by choice or by accident,” Kuder said. “So there’s this motley little family that has formed.”

She added: “I’m interested in trauma and how it gets embodied and how we manage it or don’t — how we metabolize it or don’t.”

The Eight Mile Suspended Carnival itself becomes a character in its own right, with “metal monster machines that loom round the Tower of Misfortune” and “canvas tents trembling, light peeking from openings like eyes and silent mouths, afraid to waken the sleeping machines.”

It’s enough to keep the novel’s lush and gritty world hovering in a dream-like haze that — true to form — defies categorization.

For more information on the authors and where to find their work, visit rebeccakuder.com and robertfreemanwexler.com.