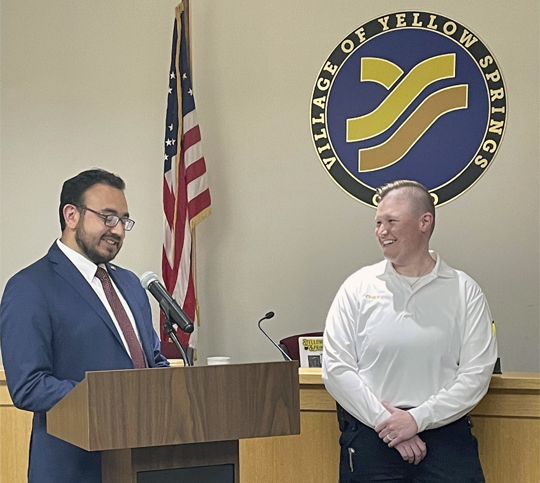 At Village Council's regular meeting on Monday, March 21, Paige Burge was sworn in as Chief of Police of the Yellow Springs Police Department by Village Manager Josué Salmerón. (Photo by Jessica Thomas)

Nearly eight months after the resignation of Brian Carlson, Interim Chief Paige Burge has been named the chief of the Yellow Springs Police Department.

A resident of Fairborn, Burge is the first woman and member of the LGBTQ+ community to take the helm of the YSPD. She has worked for the Village Police Department for the last three years since completing her training in police academy.

“What factored into the decision is what we have been trying to build as far as the Village’s approach to policing,” Salmerón said in an interview. “Paige is the clear choice.”

Burge was named interim chief in November in Carlson’s stead after being promoted to sergeant in August. Prior to her tenure as a police officer, Burge worked in asset protection, most recently as the district loss prevention investigator for Marmaxx, the parent company of TJ Maxx.

In an interview, Village Council President Brian Housh said that he was “incredibly excited” about Burge’s appointment. Housh, who was one of two Council members on the selection committee, said that he was impressed with the process and how easily the group came to its decision to recommend Burge for the chief position.

“They all saw that Paige gets it,” Housh said. “Even some of the folks who were initially resistant realized that she was a good fit.”

In an emailed statement regarding her appointment, Burge wrote:

“The last four to five months have been the greatest opportunity of my professional career. When I came to work for the Village of Yellow Springs I felt incredibly lucky to work for a community and an organization that aligned so closely with my own personal beliefs. I knew almost immediately that I didn’t want to police in any other community. I am humbled that the many groups involved in the selection process have entrusted me with the great responsibility that this position entails.”