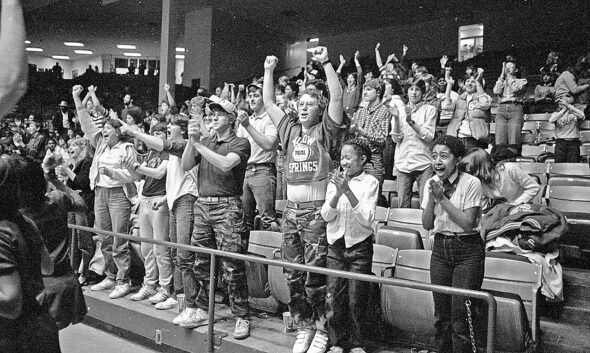 Bittersweet goodbyes for the chief. “Yellow Springs Police Chief John Grote is retiring at the end of this month after 25 years with the department. … Apprehending criminals was never the most important part of his job. Mainly, Grote has been part of, and then overseen, a department that administers justice with a gentle hand, in the style developed by longtime Police Chief Jim McKee, who initially hired Grote in 1984.” [Grote moved to Pennsylvania for three years in 1987.]

Nudes reveal arts controversy. “Village Council will push to create a local policy for public art because of complaints from several Village employees about nudity and sexual content in artwork at the annual ‘Women’s Voices Out Loud’ exhibit now on display at John Bryan Community Center.”

Schools commit to laptops. “The schools are talking tech this year, with a recently established goal to purchase laptop computers to replace the district’s desktop computers, some of which are 10–13 years old.”

Old bell tower comes down. “The cupola on top of St. Paul’s Catholic Church came down … from the place it has occupied for 60-some years.”

College donates fire engine. “The fire engine donated by Antioch College to Miami Township has been repaired and awaits a final coat of paint, according to fire chief Colin Altman.”

30 forced to flee apartment building fire. “‘You’d be amazed how far a fire can spread in five minutes,’ said Miami Township fire chief Jim Nutt, whose firefighters, as well as those of Hustead, Xenia Township, and Fairborn, battled the blaze which began at about 1:30 a.m. for almost four hours. Three of the Hawthorne Place apartments were damaged.”

Chaplin film premieres here. “‘A King in New York,’ the Charles Chaplin film banned by the United States government in 1957, will have its American premiere at the Little Art Theatre. … It was originally banned due to its satire on the ‘American way of life.’”

Lucy Morgan dies at 94. “Mrs. Morgan, wife of Arthur E. Morgan. … Her emphasis on simple living and her opposition to ostentation spread through the community, setting many of the present-day patterns that often depart from conventional practices.”

Easter pigs. “Hogs arriving first at the Community Nursery egg hunt Monday afternoon, almost did away with the colored eggs before children and parents armed with rakes and sticks could drive them away.”

Foundry celebrates birthday. “The Morris Bean Company, successor to Antioch Foundry, celebrated its first birthday Saturday with a banquet and dance. There can be no doubt that this institution with its more than one hundred employees is a great economic asset to this community.”

Radio stolen. “‘Please bring our radio back,’ pleaded the third grade pupils of Dayton Street School Wednesday. A thief had taken away their prized new radio during the night. The radio, a new Philco table model, had been purchased from funds obtained from paper drives and through the collection of sales tax tokens.”

Public reading room. “A Public Reading Room is to be established by the Young Men’s Future Club, assisted by a number of our prominent citizens. This is a much needed institution in our town.”