According to his bio, Donnell Rawlings is a comedian, but according to the man himself, his most important job is being a father to his son, Austen. With that in mind, Rawlings has been working on a plan that will balance his time spent working and parenting.

The plan? To host a series of family-friendly community events in and around Yellow Springs. The four-day series, dubbed “Donnell Land,” will include shows at Wiley’s Comedy Club in Dayton, kayaking down the Mad River and a kickball game in Gaunt Park.

After the onset of COVID-19 and the subsequent shutdowns, comedians and other performers found themselves at home. Rawlings said that during the shutdown and the months after, he spent more time with his son than he had in years.

“The pandemic changed everything,” Rawlings said.

Part of that time was spent in Yellow Springs, where Rawlings was doing performances with Dave Chappelle, who hosted more than 50 outdoor, socially distanced comedy shows here throughout the summer of 2020. Rawlings, a regular on Chappelle’s former Comedy Central sketch comedy program, described performing at what participants and fans came to call “Summer Camp” as one of the best experiences of his life.

“It was something I could share with my son,” he said. “I was making the memories that I wish my father had made with me.”

One of the highlights of the summer for Rawlings was a kayaking trip he took with Summer Camp participants. 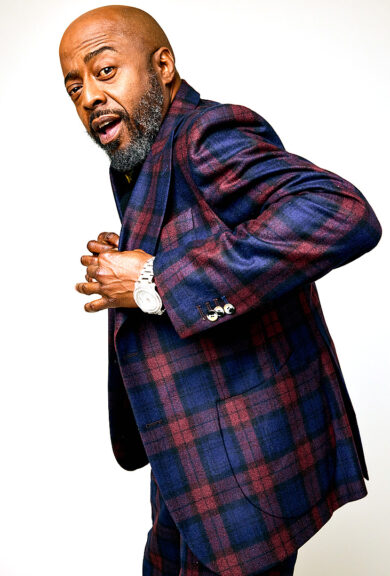 “I became the river ninja,” he exclaimed. “But it took a pandemic to show me that I wanted to hang out with my son in nature.”

Rawlings said he appreciated the opportunity to slow down after building his career as a comedian. He has worked in the entertainment industry for nearly 30 years, but started as a heckler.

“One night the stage manager asked me if I’d like to perform,” Rawlings said. “I got a standing ovation and fell in love with performing. I haven’t looked back since.”

Twenty-seven years later, Rawlings is ready to take on projects that will allow him to work and make memories with his son; that commitment to memory-making was the inspiration for his upcoming “Donnell Land” event over Memorial Day weekend in Yellow Springs and the Dayton area.

According to Rawlings, the event was planned with his son in mind.

“My son had such a great time when we were here, and he’s always asking when we can come back,” Rawlings said. “I would not even consider creating the energy without involving him.”

“I wouldn’t be here without Dave’s introduction and his support of the community,” he said. “I really appreciate how Yellow Springs accepted me and welcomed me with open arms — well, at least 90% of them.”

Rawlings said that his stay in 2020 opened his eyes to what Chappelle had been experiencing when Chappelle decided to live in Yellow Springs.

“We would all laugh at Dave, so I always wanted to know what Dave was doing in YS,” Rawlings said. “The first time I came here, I got it — the vibe, the calmness, the peace — it is why a person would want to live here. It’s a safe place for people to be around the people they love.”

Yellow Springs has become a haven when he needs a break from his home in Los Angeles, Rawlings continued.

“Whenever my thoughts are getting crazy, I come here,” he said. “It’s a very magical and beautiful place.”

And that’s what Rawlings wants to share with those accompanying him on his Memorial Day outings; but this year, he is playing host.

“I’m the camp counselor,” he said.

Rawlings said that he chose events that reminded him of the 2020 Chappelle Summer Camp, where Chappelle and his wife, Elaine, arranged outings for the comedians and guests who performed at Chappelle’s summer comedy shows.

“Elaine was the OG camp counselor — she and Dave organized all of these fun events,” Rawlings said. “I can’t redo what they did, but I wanted to continue these opportunities for the community to get together.”

While Rawlings will be performing several shows over the course of the weekend, he said he was more excited about the outdoor events, which are geared to draw in families and those looking to be outdoors.

“My super focus is the kickball game and the river run,” Rawlings said. “I want anyone who participated to be able to look back 10 years from now and smile at the memory.”
Rawlings said the river run was especially important to him because of the opportunity it gives people to connect with others, themselves, and nature.

“The experience is just incredible,” he said. “I can’t wait to share it with my son and the community.”