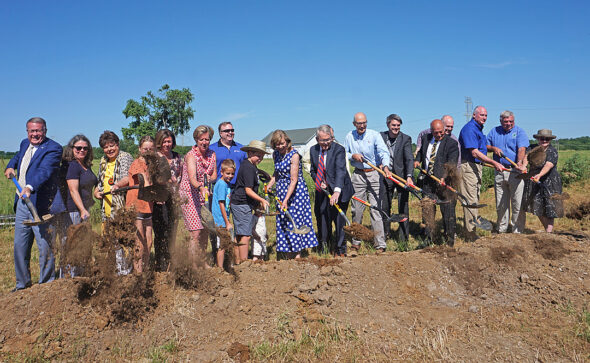 The Great Council State Park, Ohio's 76th state park, is slated to be completed by 2024. The park will be located on the site of the former Tecumseh Motel in Oldtown on U.S. 68. (Photo by Jessica Thomas)

On Monday, June 27, a groundbreaking ceremony was held for Ohio’s 76th state park.

Ohio Department of Natural Resources Director Mary Mertz and Gov. Mike DeWine announced at the event that the upcoming park, slated to be completed by 2024, will be named Great Council State Park.

The new park will be located on the site of the former Tecumseh Motel in Oldtown on U.S. 68, which was razed in March. The one-acre plot on which the new park’s interpretive center will be built is encompassed by land that was formerly one of the largest-known Shawnee settlements in Ohio. The settlement is cited by some historians as the birthplace of Tecumseh, the famed Shawnee chief.

Plans for Great Council State Park include an interpretive center with an architectural design based on the traditional council house form historically used by the Shawnee tribes.

“[We’re] breaking Shawnee ground. … This is probably village space where we’re standing right now,” Silverhorn said. “There’s so much history in this place. … I’m super excited to get started and bring more Shawnee history to the place.”