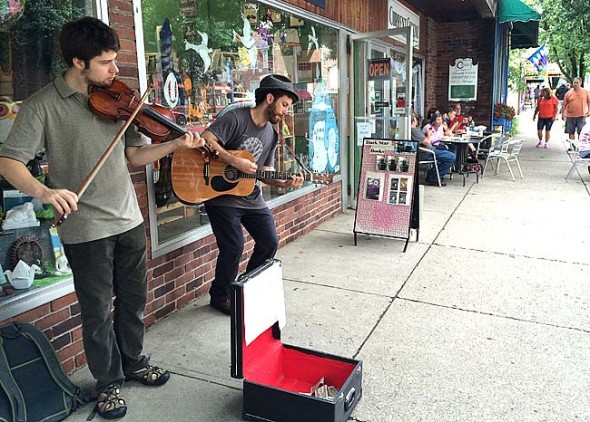 At its most recent meeting on July 21, Village Council heard a presentation from Public Arts and Culture Commission member Amy Wamsley on busking, or street performers entertaining in public areas. The presentation included recommendations on regulation and enforcement, which were compiled following surveys of downtown businesses.

Wamsley began the presentation by defining busking and sharing the current policies on busking, which she said were difficult to find on the Village website. There is currently no ordinance on busking; draft legislation was brought forth in 2020, but was not passed by Council. Wamsley also noted that in several places, policies for busking were combined with policies for street vending.

“The PACC really feels that there should be separation between street vendors and busking,” Wamsley said.

She also indicated that there is a lack of clarity about the cost to register for busking.

“From what we can tell, there is no cost to register, but there is a cost to re-register,” Wamsley said.

Wamsley then listed the PACC recommendations for busking, which include:

• Having one, clear location on the Village website for busking policies that uses clear and consistent language;

• Eliminating the registration requirement unless there is a monitoring system in place;

• Providing clear and accurate instructions, including a map of where street performers can perform; and

• Creating cards for distribution that include Village standards for street performers, and indicating areas designated for amplified and/or group performances.

Wamsley also noted that the YSPD is currently tasked with enforcing expectations for buskers.

She said that the PACC recommended giving every street performer a card with Village standards and asking them to adhere to the standards. The commission suggested asking those who live and work in the village to monitor themselves “in the spirit of cooperation.”

“Only after a reminder has been given and the standards of consideration continue to not be met should the YSPD be called,” Wamsley said.

Council members thanked Wamsley for her presentation and said they would be discussing street performers further at a later meeting.

In other Council business, June 21:

In response to a question from the News, Council member Carmen Brown said that Council did not change the language around a customer needing to be at risk of shut-off in order to qualify to request funds.

“The ‘threat of disconnect’ piece is a common practice,” Brown said. “What we have done is double the amount, which can give people a clean slate.”

• Council passed an ordinance to rezone 0.8 acres of property owned by Theodora Stephan on East Center College Street from educational institution to high density residential. According to Zoning Administrator Denise Swinger, this rezoning would be consistent with the neighboring parcels of land.

• Council passed a second reading of an ordinance amending Council rules and procedures. According to the legislation, the manager’s report will be given earlier in the meeting, now following special reports. The other change is aimed at public hearings for legislation. Public hearings will be open during the second reading of a given piece of legislation. If a piece of legislation is declared an emergency, it can be passed after a single reading; in that case, the public hearing will be included in the single emergency reading.

• Council passed a resolution to purchase five Adult+Minor pool passes for the Village Impact Program. The cost of the passes is $565, and will allow mentors and mentees to enjoy the pool throughout the summer.

“We did well as a community,” Salmerón said.

The Village received $20,000 to go toward the Cemetery Street parking lot project. According to Salmerón, the grant would cover the cost of the project. In addition, Glen Helen and WYSO received significant funding for ongoing projects.

Salmerón reported on the power outage response following a storm. In response to a question from the News, Salmerón said that the best way to contact the Village about outages is through the dispatch phone number, 937-767-7206.

“This is the fastest way to get your house serviced,” Salmerón said. “Villagers can count on me to provide updates on Yellow Springs Bulletin Board [a Facebook group].”

Calling the Village directly will ensure that each address is placed on the outage master list, which is held by dispatch. Salmerón said that the time it takes to address each outage depends on severity. It takes about 45 minutes for Village crews to travel and obtain the supplies to repair the outages. While most repairs can be done quickly, repairing or replacing transformers “can take hours,” he said.

Council discussed a request from Home, Inc. for $30,000 to go toward an affordable housing project for seniors. Council members MacQueen and Stokes drew attention to a letter from Home, Inc. Executive Director Emily Seibel, which included Council meeting minutes where Council voted to set aside $30,000 for a Home, Inc. project.

The next Village Council meeting will be Tuesday, July 5.