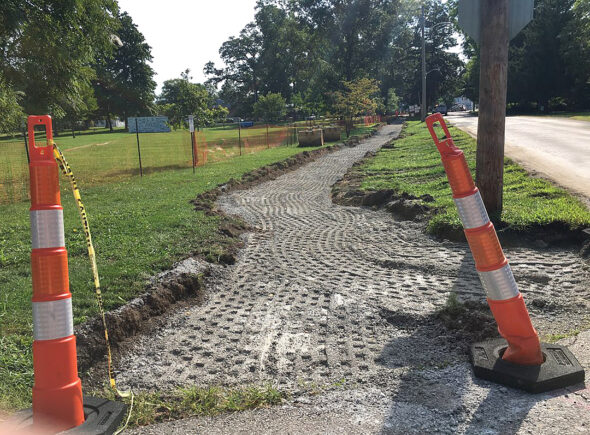 Ohio Department of Transportation crews recently began work on a 2,100-foot sidewalk that will run the length of Limestone Street, from the Walnut Street intersection to the edge of Bill Duncan Park. The total cost of the project is $296,875.80. (Photo by Matt Minde)

Where the sidewalk begins

On Monday, Aug. 22, Ohio Department of Transportation crews began work on a sidewalk that will extend the length of the walkway going along Limestone Street.

The sidewalk project has come to fruition through sustained efforts from the Village and volunteers, who have worked to continue the Safe Routes to School project.

The total cost of the project is $296,875.80 and was paid for through a grant from ODOT. Crews began their work by Mills Lawn, with hopes of completing the segment between Walnut and Phillips streets within a week.

Village Manager Josué Salmerón said the whole project — 2,100 feet of sidewalk — is estimated to be completed in about four weeks.

One Response to “Where the sidewalk begins”