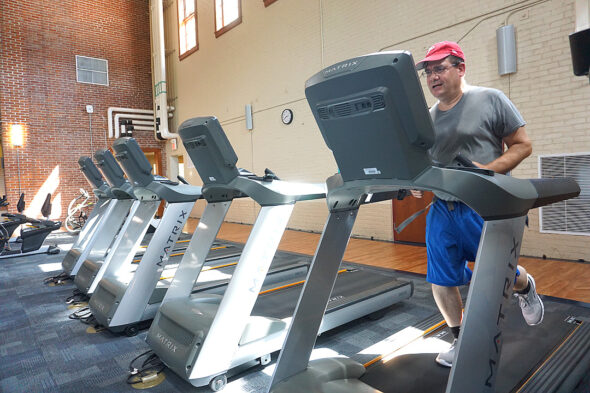 Dan Robrish, 51, arrived in North Macedonia on Monday, Sept. 26, beginning his two-year assignment with the Peace Corps. He is pictured on a treadmill at the Wellness Center, where he exercised daily in the lead-up to his Peace Corps departure, which was delayed by more than two years due to the pandemic. (Photo by Lauren “Chuck” Shows)

This week, villager Dan Robrish realized a plan that has been in the works for more than two years: He began his work with the Peace Corps.

Robrish, 51, who moved to Yellow Springs in 2020, was originally set to leave for a Peace Corps assignment in 2020, but that departure was put on hold due to the pandemic. On Monday, Sept. 26, he and 16 other Peace Corps members arrived in North Macedonia, where they will serve until December 2024.

A few weeks before his departure, Robrish spoke to the News while running on a treadmill at the Wellness Center. His choice of location and activity for the interview, he said, was three-fold: First, it would allow him to continue the daily workouts he’d instituted since receiving a Peace Corps assignment — for the second time — earlier this year, in anticipation of the medical clearance he would need to receive before departing. Second, having someone to talk to would make the hour-long run less tedious.

And third, it would make for a much more interesting News photo.

“I know it’s a lot better to get a photo of somebody who’s actually doing something,” he said with a laugh, and dialed up the speed on the treadmill.

Robrish’s knowledge of the finer points of photojournalism — and his ability to multitask — come from a long newspaper career. After stints with several small newspapers and 11 years working for the Associated Press, Robrish built the weekly newspaper The Elizabethtown Advocate, in Elizabethtown, Pa., from the ground up. For seven years, he served as the paper’s editor, publisher and sole reporter.

That kind of dedication to his work, Robrish said, likely influenced his acceptance into the Peace Corps.

“I started a small-town newspaper from scratch and ran it single-handedly — they realized they didn’t need to worry about me giving up on something challenging quickly,” he said.

Robrish stayed on at The Advocate as the editor for another three years after selling it to another publisher. During that time, he said, he was looking to do “something different.” A trip to Yellow Springs to visit his mother, the artist Alice Robrish, threw him into the path of villager and former Peace Corps volunteer Berch Carpenter, who suggested Dan Robrish look into it for himself.

“I did some research and talked to a recruiter,” he said. “And the more I learned about it, the more interested I was.”

And, it seemed, the Peace Corps was also interested in him: “They get really excited when middle-aged people apply,” Robrish said.

Most applicants come to the Peace Corps right out of college as undergrads, he added, but for some assignments, applicants from a wide range of ages — particularly those with a few additional decades of life experience — are a boon. (The ages of his cohort in North Macedonia, he wrote in a recent blog entry, range from 20s to 80s.)

It also helped, he said, that his application stated that he was willing to serve wherever he was most needed.

Robrish was accepted into the Peace Corps in 2019; he sold his home in Pennsylvania and left The Advocate in March 2020, staying with his mother in the village while he awaited his planned June departure. He was assigned to train elementary school teachers in Gambia in West Africa — an assignment that, he said, initially surprised him.

“[A Peace Corps representative] said, ‘Well, it’s not because of the skills you have’ — and I was almost insulted here, but I listened,” Robrish said with a chuckle. “[He said] my resume showed that I have a lot of tenacity.” 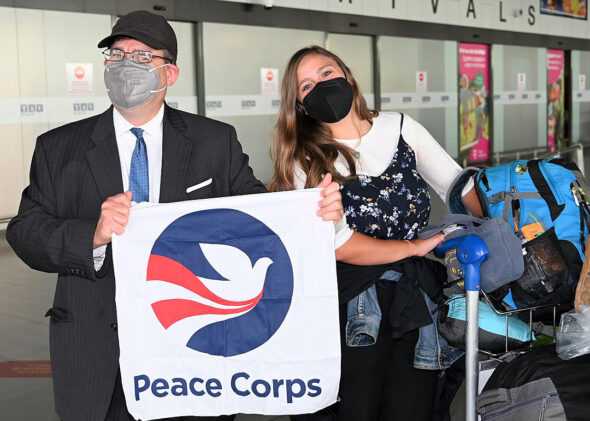 Tenacity, he added, or the lack thereof, was a problem the Peace Corps had experienced when attracting applicants to Gambia, where they would live in a remote area with limited access to electricity and no running water. It would be challenging — but Robrish was ready to face that challenge.

Not long after he arrived in Yellow Springs, however, the world at large came to a halt due to the pandemic. Robrish was told that his departure would be delayed by at least three months; that delay stretched into two years.

Thus, for a while, Robrish settled into a different life than he’d planned. He did freelance editing for Ph.D. dissertations and for realty companies. He organized a Yellow Springs chapter of the Rotary Club, a civic organization with a focus on community service. He spent a few months in Ecuador, aiming to deepen his knowledge of Spanish, and thought about establishing himself there if the Peace Corps didn’t get back in touch.

Eventually, the Peace Corps did reach out — and asked him if he’d be willing to reapply and consider other assignments.

“I said, ‘Sure, absolutely’ — and I asked, since things were changing, if they’d consider sending me somewhere with plumbing and electricity,” he said.

Robrish said he presumed the Peace Corps had that request in mind when they assigned him to North Macedonia on April 29 this year.

“From what I’ve been told, there will certainly be plumbing and electricity — but I should not expect them to always work,” he said.

His work in North Macedonia will be as a community development associate — a job title with broadly defined duties, he said. According to the Peace Corps website, Robrish and his cohort “will focus on supporting local communities and organizations to effectively manage sustainable community development.”

Robrish expanded on that detail, adding that, after some training, he and his cohort will aid local organizations that pitch “worthwhile” development projects to the Peace Corps Headquarters in Skopje, North Macedonia’s capital.

The Peace Corps laid out some cultural expectations for Robrish’s cohort as they settle into their new host country: because North Macedonia is a “collectivist society,” volunteers should expect “much less alone time than they may be used to;” housing will be “modest, yet functional and safe;” and “respect tends to come with age and experience in North Macedonia,” among many other guidelines.

Outside of his duties to the Peace Corps, Robrish said he hopes to connect with other Rotarians; the work of Rotary International and the Peace Corps often overlaps, and in 2015, the two organizations penned a Memorandum of Understanding to “expand [their] partnership to Peace Corps posts worldwide,” according to the Peace Corps website.

At the time of the interview, Robrish was still waiting to learn if he had gained medical clearance to depart; a medical history that includes high blood pressure and gout were of some concern, he said, but his workout routine and assurance from his doctor that he was not at risk of heart issues were reassuring. Just under two weeks before his scheduled departure, he received word of his clearance.

Robrish and his cohort arrived in Washington, D.C., on Friday, Sept. 23, and spent that evening and the following day in orientation before flying out of Dulles International Airport on Sunday. He wrote to the News upon his arrival in North Macedonia; he reported that his cohort will stay in a hotel for five days as a precaution against COVID, that his journey was smooth and that he’s already “adjusted to the new time zone.”

For more on Robrish’s Peace Corps journey, visit his blog at robrish.com.