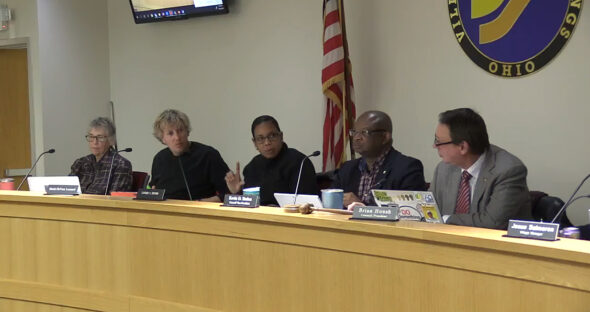 At the Monday, Nov. 21, Village Council meeting, Council members voted down a 2% solid waste fee that would have drawn in funds for educational materials aimed at reducing the amount of organic waste villagers send with their solid waste.

Village Manager Josué Salmerón said he had been thinking of the additional fee for some time, and the fee would enable the Village to leverage connections with organizations already working to offer compost collection service.

“I saw this as a real opportunity to strengthen local collaboration,” Salmerón said. “Whatever we do will have little impact on our rates.”

Despite the small impact, Salmerón recommended that Council members choose to adjust the rates without tacking on the 2% fee.

In remarks encouraging Council to opt for the fee, MacQueen said Yellow Springs should consider how future generations would look at Council if they choose to do nothing about reducing solid waste.

“Twenty or 30 years from now, my grandchildren will ask why we didn’t do anything,” MacQueen said.

Commenting on the current recycling practices in Yellow Springs, MacQueen said the Village could be doing more to educate villagers about recycling and composting best practices.

“I assume everyone here understands the way we produce goods cannot sustain itself,” she said. “Maybe 9% of recyclable materials actually gets recycled.”

MacQueen said other communities in Ohio have similar models for organic waste, citing Bexley, a Columbus suburb that has a curbside organic waste collection program.

“It’s possible to do it,” MacQueen said. “I figured 2% would mean 32 cents a month [for customers purchasing the lowest tier of garbage collection].”

During the public hearing portion of the legislation’s reading, villager Patricia Brown said that she was in favor of doing more to encourage composting and recycling, but she would like the Village to have a plan before charging a new fee.

Council member Kevin Stokes said he would also like to have a plan in place, and would like to explore other options.

“I’m wondering whether we should take the opportunity to not have a hand in increasing costs,” Stokes said.

Prior to voting on the legislation itself, Council opted to read the option without the additional fee into the record on a 4–1 vote. MacQueen was the only Council member to vote “no.” The vote to adopt the fee with the 10% increase to cover Rumpke’s fees also passed on a 4–1 vote, with MacQueen being the only “no” vote.

In other Village Council business, Nov. 21:

• In a 3–0 vote, Council members Carmen Brown, Stokes and Gavin DeVore Leonard voted to allow the village manager to enter into a license agreement with villager Patrick Lake’s Massie Creek Ventures. Council members Marianne MacQueen and Brian Housh recused themselves from the vote, citing “possible perceived conflicts of interest” and advice from the village solicitor.

The agreement would allow Massie Creek to access public lands near the site of the YS Lumber Co. without the Village giving up any rights to the space.

In addition to access, Massie Creek Ventures will install stairs, a ramp so the business can be accessed by people with disabilities and a restroom the public could access. Village Solicitor Amy Blankenship said a last-minute addition to the contract would dictate a date of completion for the public restrooms; should the project not come to fruition by that date, the license would be void.

• Council unanimously approved a measure repealing and replacing the description of the treasurer’s role in the Village ordinances.

• Council unanimously approved a fourth-quarter supplemental to the Village budget. The additional funds include a $20,000 retainer fee for RITA services after the Village brought in more revenue than expected in 2022. The supplemental also includes $25,000 for overtime wages paid to Village employees after several extensive power outages, $46,000 for additional solid waste expenses and a $4,400 expenditure for blankets and other supplies for the Village’s homeless population. The Village will spend the funds and be reimbursed with grant money from the Yellow Springs Community Foundation.

• Council members unanimously approved a resolution that would allow the Village manager to contract with JNT Excavating to replace 2-inch galvanized water lines throughout the village.

According to Public Works Director Johnnie Burns, the contract would utilize a $1.2 million grant the Village received earlier this year, and would replace lines in eight streets within the village, an increase from the six streets that would be upgraded through the original engineering plan. Burns said he believed construction would be completed by 2024, putting the Village in compliance with water and sewer requirements mandated by the state.