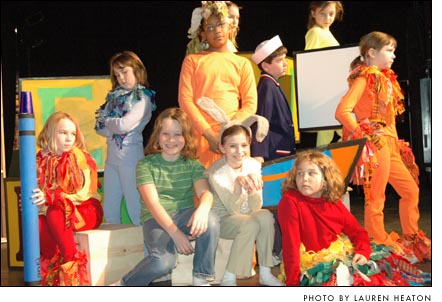 You thought YS Kids Playhouse events only took place in the summer? Think again! YSKP is moving into the schools.

On March 6–9, third through sixth graders at Mills Lawn School will perform Mary Kay Clark’s original theatrical adaptation of the children’s story, The Velveteen Rabbit, by Margery Williams, which was first published in 1922. This is one of a series of educational modules YSKP is implementing in order to enhance their existing theater arts training and skill building for youth.

Clark, the YSKP educational director, is also directing the play. Two years ago she directed the YSKP summer production of CSI:YS and coordinated the one-act plays at the high school. It was she who proposed the idea of doing a play at Mills Lawn on the off-year from their bi-annual musical to YSKP Director John Fleming, Clark said in a recent interview.

Set against the backdrop of the scarlet fever epidemic in the early 20th century, The Velveteen Rabbit is the story of a toy rabbit that becomes real through the love of a child. Lessons to be learned from the production range from the sociological to the scientific, making it perfect for achieving YSKP’s goal of merging theater with educational components, she said. In connection with the play, the students are discussing topics ranging from bullying to germs and disease.

On Thursday, a segment of the play will be performed for the school as a preview. Plans include for the students to discuss how a play is written.
“Part of the kids’ homework was to read the book and compare it to the play,” Clark said.

Fourth-grader Ursula Kremer plays the title role and sixth-grader Zane Pergram stars as the boy who loves the rabbit. The skin horse is played by Kennedy Harshaw and Ruth Scherr plays Nana. Sophie Davidson and Laura Chase play Raggedy Ann and Andy, the play’s narrators. About 40 other students also have roles. The older kids play the toys and the forest animals are played by third-graders, Clark said.

The bigger picture for YSKP in the future will include outreach built on last summer’s expanded program, which included street festivals in Yellow Springs and performances in Springfield, she said.

“We want to widen our group participation and encourage more kids to have an experience with YSKP and have more connections with the Springfield community,” Hunt said.

According to Hunt, YSKP’s version of going on tour amounts to holding workshops in schools and churches in Yellow Springs and Springfield. She calls it “the creation of small theatrical communities.”

This summer’s YSKP program promises “theatre arts immersion” that will include classes and workshops in theater knowledge and skills to supplement their traditional hands-on learning. The classes will be conducted by theater arts professionals prior to rehearsals during the first two weeks of each session. This summer YSKP will be performing its own version of Frankenstein in June and a play about a vampire rabbit titled Bunnicula in August.