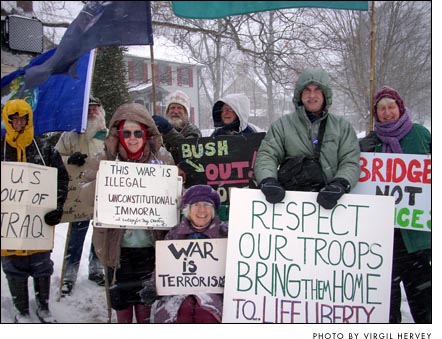 A corner beacon for peace

On Wednesday, May 19, the war in Iraq marked its fifth year, and in the past week this country hit the milestone of having the 4,000th service member lose his life. The war has surpassed the American involvement in World War II by two years. These are the ways in which many many Americans mark the passage of the war, but a group of about a dozen stalwart war protesters have observed it in another way, by keeping vigil on the corner of Limestone Street and Xenia Avenue every Saturday from noon until 1 p.m.

The vigil began soon after this country sent soldiers to Afghanistan in response to the 9/11 attacks. Alarmed at that action, local peace activist Hazel Tulecke rounded up a few of her friends and organized a vigil on the corner.

“I don’t remember exactly why I chose that corner,” Tulecke said in a recent interview. “I know if I were going to pick a spot for a protest today, I’d choose the same place, because it is close to downtown, but not in the thick of things.”

The vigil grew as the U.S. started rattling sabers in the direction of Iraq. Local architect Bill Firestone joined the protesters in October of 2002, shortly after Congress authorized the president to attack Iraq if Sadaam Hussein refused to give up his weapons of mass destruction. While Firestone was not opposed to some kind of action after 9/11, he said he was strongly opposed to the invasion of Iraq.

“The 9/11 attackers were from Saudi Arabia,” Fire-stone said. “This was a personal vendetta against Iraq. And now we have another agenda, Iran.”

According to Firestone, most of the foreign fighters and improvised explosive devices (IEDs) are from Saudi Arabia, not Iran.

“Cheney is in the war-profiteering business. Bush is in the oil business. The war is bankrupting us. We are borrowing billions from the Chinese and the Saudis. As the father of two children, I am concerned about their future,” he said.

Terry Snider joined the group on the corner “in the fall of ’02 as the rhetoric about Iraqi involvement in 9/11 started,” he said recently. “Bush, Rice and Rumsfeld all started mentioning 9/11, Iraq and Sadaam in the same sentence.”

Most Saturdays, about a dozen vigil participants come out, according to Snider, although special occasions attract more.

“For the first anniversary we had around 30 people,” he said.

Snider has noticed a big shift in reaction from those driving by the corner as the protesters are out.

“At first, more people were giving us grief than now,” he said. “They would shout, ‘Freedom isn’t free.’ And some would give us the finger. I had this feeling of helplessness.”

As the war has grown increasingly unpopular with the American public, the antagonism has declined and shows of support have increased.

“The protest has been empowering,” Firestone said.

Not only antiwar protesters have shown up on the corner. For a time the Patriot Riders, a group of motorcyclists who have taken it upon themselves to accompany funeral processions for fallen soldiers in order to insulate them from protesters, came as well.

In December, Firestone went to the Village Council to ask for police protection for the protesters, because, he said, the Patriot Riders had been making threatening remarks. But over time, the two groups began to find some common ground and began to make peace overtures of their own. According to Firestone, he had several good conversations with their leaders.

Firestone acknowledges that those who keep the vigil do so from different points of view. Some are pacifists, either religiously, philosophically or politically. Some are against the Iraq war in particular.

Gordan Chapman is a Veteran Against the War who, as is the case with most of the protesters, can trace his history of protest back to the days of the Vietnam War. He and his wife, Mary, who passed away three years ago, used to drive past the protesters and feel guilty that they were not out there with them, he said. He joined them on the corner after her death.

According to Chapman, he was in Army Intelligence in World War II and worked for the CIA, in Washington, D.C., until he finally quit over U.S. policy in East Asia. He describes himself as opposed to certain wars, whereas many of the others on the corner are what he describes as pacifists.

“The Friends Meeting is strongly represented at the vigils,” Chapman, who is a Unitarian, said. “They are coming from a different direction. I tend to defer to the Quakers when it comes to dialogue. I let them represent the group.”

The “group,” as he calls it, is loosely organized at best. The vigil participants never have meetings or strategy sessions.

“We had a potluck a couple months ago,” Snider said. “That’s about it.”

Despite the lack of organization, they show up every week with their signs and flags, no matter what the weather, especially the core group of Tulecke, Houston, Snider, Chapman, Mary M. Morgan, Janeal Ravindal, Daniel Taylor and others. About eight of them braved blizzard-like conditions several weeks ago, while most villagers were hunkered down around the fire.

“I’m embarrassed I wasn’t out in the snowstorm,” Chapman said. “I’m in my 80s and have to watch my health. But Bill and Hazel were out there, and they are older than I am.”