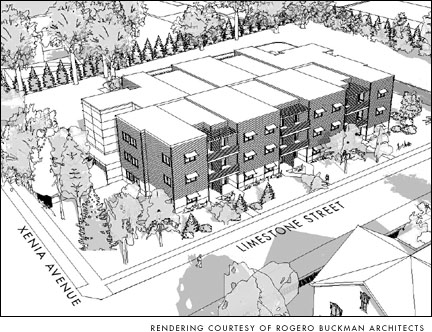 An architect’s rendering of the proposed FCC senior apartment building on the corner of Xenia Avenue and Limestone Street. The three-story building will house 30 apartments.

At their May 5 meeting, Village Council members unanimously approved a first reading for the proposed Friends Care Community apartments on the Barr property downtown. The 5–0 vote followed an hourlong discussion during which neighbors, villagers, FCC representatives, Planning Commission and Council members weighed in on the project, which has prompted competing concerns about downtown aesthetics, the demolition of a historic building and the need for affordable housing for seniors.

“I think the plan is lovely and a good addition to the community,” Van der Heiden said.

Friends Care Community has proposed a three-story building with a 10,000 sq. ft. footprint to be built on the current site of the historic Barr property on the corner of Limestone Street and Xenia Avenue. The planned unit development project would include 30 rental apartments to be made available to those over 55 years old, at a rental price of about $650 for a one-bedroom apartment and $850 for two-bedrooms.

At the meeting, FCC officials said the project is the culmination of a longterm goal to create senior apartments in the village.
“We believe it’s an excellent location for residents and good for downtown,” said FCC Board Chair Carl Champney.

The proposal came to Council after Planning Commission voted last month to not recommend the project to Council. The vote was 2–2, and the project needed a majority vote to be recommended. The planners had considered two versions of the project since it was introduced in January, with the second one a revision that attempted to respond to concerns about the project’s mass, according to FCC officials. However, the revision did not sufficiently address his concerns, according to Planning Commission President John Struewing on May 5, who said he voted against the FCC plan because it does not preserve the historic Barr house and because the building’s volume does not fit into the existing neighborhood.

“According to the Comprehensive Plan, this is a special planning area, the gateway to downtown,” Struewing said.

Villagers may not have a clear idea of the building’s size, according to Planning Commission member Matt Reed, who said the project’s mass, lit parking lot and stormwater runoff “will change the nature of the neighborhood.” However, Reed said, he voted for the project.

According to FCC architect Mary Rogero, FCC has attempted to address concerns about the building’s size. For instance, its revised design includes “gestures going in and out that break up the size and is more compatible with other buildings” in the neighborhood. The revised plan also places the building further away from the street than originally intended, and locates the parking lot in the rear.

However, there are also limitations to what changes can be made since FCC planners determined that the unit must have at least 30 apartments to break even, Rogero said. For instance, dividing the project into two buildings rather than one would make the apartments no longer affordable, according to FCC Executive Director Karl Zalar.

Several community members asked Council to consider the need for affordable housing for seniors as a priority.

“Please consider what’s right about this project,” Charlotte Battino told Council, stating that her mother, who currently lives in Lawson Place and can no longer drive, would benefit from living a walkable distance from downtown.

“If we continue to reject housing, I’m concerned what will happen to the community,” she said.

“This is a difficult project not to be in favor of,” Miller said, stating that she opposes the project due to its size and its lack of amenities for seniors, including the lack of patios and common meeting space.

While the project includes a green roof and the use of Energy Star appliances, its planners have not taken significant steps toward energy conservation, according to Pat Murphy, executive director of The Community Solution, who said, “The energy question should be seriously addressed.”

The project “will have a negative effect on the gateway to Yellow Springs and the neighborhood,” she said.

The proposed apartment building is a challenge to the community because it seems to pit several village values, such as the desire for affordable housing and the desire for an aesthetically pleasing downtown, against each other, according to Hempfling, who encouraged villagers to discuss these issues among themselves before Council again takes up the plan in June.