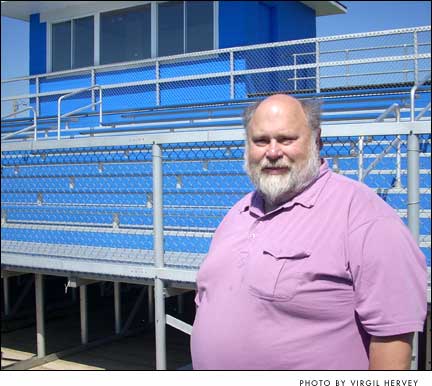 It’s not much news when an employee leaves his first real job after college, but when that person has held that job for 35 years, the occasion is worthy of note.

It took a minute or two to locate Rainey in the graduation crowd on May 5 as Gudgel acknowledged him from the stage. He was hiding at the far end of the bleachers, reluctant to stand at first. But he finally gave in to a second burst of applause.

“He is an icon,” Gudgel said recently. “Chris Rainey is one of the most dedicated people to young people I have ever known.”

Gudgel and Police Chief John Grote were students at the high school when Rainey started as a middle school teacher in the Morgan Middle School. Grote played catcher on the baseball team Rainey coached to the regionals in 1975. YSHS teacher Dave Johnston was one of his students.

“It would be hard to name them all,” Rainey said of his past students. “There must have been between fifteen hundred and two thousand.”

Rainey took a cut in pay from his summer substitute mail carrier job after graduating from the College of Wooster to take the Yellow Springs job, he said. It had been his 17th interview. He was hired as a math teacher in an innovative interdisciplinary experiment that was going on at the middle school level. A history major, he was certified to teach both math and social studies.

The Morgan Middle School was divided up into three “caves,” one each for the sixth, seventh and eighth grades, he said. Teams of teachers worked together in an open environment that was the subject of many articles and studies. It was not what he had expected of a teaching job, he said. There were no books, no set curriculum, and they met everyday after school until 5 p.m. But there was “incredible freedom” for the teachers and he felt accepted.

“We always had visitors walking around,” Rainey said. “It was like we were exhibits in a zoo.”

Gudgel remembers being a student teacher in the Morgan Middle School while Rainey was still there and how he was a good fit for the interdisciplinary program. “He is well versed on a variety of subjects,” he said.

Eight years later, Rainey moved on to the high school as math teacher and athletic director. He also coached the baseball team on and off, the most recent stint starting in 1999 with YSHS Maintenance Supervisor Craig Conrad, who also played center field for Rainey as a high schooler.

According to Rainey, who as a high school student dabbled in baseball and football, he was never much of an athlete himself, but he always loved sports.

According to Gudgel, Rainey, to this day, blames him for an imagined lack of respect for the high school baseball team. In 1975, a Rainey-coached team won its only district championship. That same year, the track team, and one of its stars, Gudgel, won the state championship, overshadowing the accomplishment of the base ballers.

“We were always being overshadowed by track,” Rainey said.

Is there life after YSHS? Rainey is looking forward to moving to Lebanon with his fiancée, Lucinda Lake, and starting a second life. There will be travel and then he will probably work somewhere. He would consider another teaching job, he said, but only if it is close to his new home.

Rainey could have retired sooner than in 35 years. “I want to get out while I’m still at the top of my game,” he said. “This is just the right time. It’s time I learned how to flip a pizza.”

Rainey moved to Yellow Springs when he was first hired. Two years later he moved to Clifton, where he raised two sons as a single parent. His son Mark now does drafting for an engineering firm and Brian owns the Sunrise Cafe.

“I won’t notice that I’m not a teacher anymore until August,” he said.