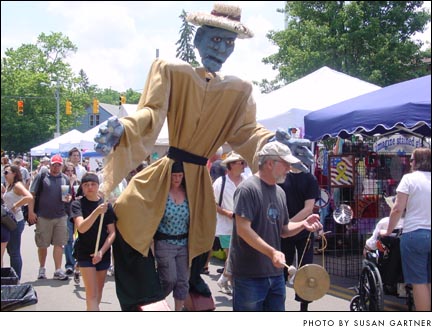 A large Frankenstein puppet walked the streets of Street Fair last Saturday, calling attention to the upcoming YS Kids Playhouse production of ‘Frankenstein, Or the Difficulty of Changing One’s Mind,’ an adaptation of the venerable tale, to be performed June 26 to July 6 (no show on July 4th) at the Antioch Amphitheater.

YSKP to bring life to ‘Frankenstein’

Fans of Mary Shelley’s original work, Frankenstein, written in 1818, must have been horrified to watch Hollywood hook its profit-seeking electrodes up to her carefully constructed philosophical essay, then zap 42 celluloid creations into life. Beginning with the 1931 film starring Boris Karloff, subsequent films have spun progressively further away from Shelley’s original message, including Elsa Lancaster and her memorable hair in Bride of Frankenstein (1935) and a version starring the 1940’s comedy duo in Abbott and Costello Meet Frankenstein (1948).

“That was the low point,” laughed Yellow Springs Kids Playhouse founder and artistic director John Fleming in a recent interview.

Frankenstein, Or the Difficulty of Changing One’s Mind is Fleming’s version of the classic tale. The new musical to be presented by YSKP, was adapted and directed by Fleming with musical direction by Tucki Bailey and music composed by Neal Kirkwood. The play will be presented at the Antioch Ampitheater on Corry Street, June 26 to July 6 (no performance July 4). All performances begin at 7:30 p.m. For reservations, call 937-769-1030.

“They basically took Mary Shelley out of it,” said Fleming, referring to the downward spiral of monstrous spin-offs. The original work, he explained, is about a tragic figure, scientist Victor Frankenstein, and how his attempt to create a life that would benefit humankind goes awry.

“One of the questions of the book is — are there any boundaries to science?” Fleming said.

Far from the awkward and grunting image most of us are acquainted with, in the original book, the creature that Dr. Frankenstein creates not only learns how to speak English, but studies the great writers and poets of the 19th century.

A recent Broadway production attempted to be true to the book and did not find a receptive audience. “The lesson from this,” Fleming said, “is it is very difficult to take a book that is so deep and philosophical and translate it into entertainment.” With Victor Frankenstein-like exuberance, he added, “But I think I’ve achieved it!”

As with Shelley’s work, Fleming’s creature sees human beings as wonderful. Unfortunately, anyone who sees him instantly treats him as a monster. The creature goes back to his creator and insists that he make him a partner. Victor Frankenstein is torn — horrified by what he has created but also sympathetic. Finally, he refuses.

It’s at this point that Fleming veers from the original.

“It’s not so good to have murders on stage in a YS Kids Playhouse show,” Fleming said. “In my story, the creature takes revenge on the doctor by creating a kind of ecological terrorism.” Like Shelley, Fleming uses the storyline to deliver a deeper message. “The creature is treated as a fiend and a beast,” explained Fleming, “and so the creature, conscientiously, starts acting like a fiend and a beast. I think that was one of the underlying premises of punk music.” All of this is a fairly deep concept to come out of children’s theater.

“That’s the thing about YSKP shows,” said Fleming. “They’re about big ideas even though we hide them in entertainment.”

Instead of being miserly with his creations, Fleming spreads the artistic expression around. To compose the music for Frankenstein, he hired long-time friend and collaborator Neal Kirkwood whom Fleming and his wife, Louise Smith, have known since the early ’80s from their life in New York.

An accomplished jazz pianist and composer, Kirkwood composed 12 songs which musical director and former Yellow Springs resident Tucki Bailey then taught to the cast. Last week while Bailey had to be back in California, Kirkwood, filled in. He flew in from New York and immediately went to rehearsal at the Antioch Area Theater.

“I walked in and they were singing my song,” Kirkwood said in an interview during his brief stay in town. “They sounded great.”

Accustomed to working in all kinds of venues, including jazz clubs, theater, and schools, Kirkwood enjoyed the challenge of making a dozen songs fresh while considering the range and abilities of the actors.

“I’ve been working with kids a long time now,” he said. “I challenge them. I don’t try to write simple. And I knew that these kids were well-trained. I knew they could do harmony.”

Kirkwood, who hopes to return to watch a performance, also appreciates the work that Bailey did prior to his arrival. “The reason it’s so strong musically is because of her,” he said.

An accomplished jazz saxophonist and composer as well as a former Yellow Springs resident, Bailey has been the musical director for YSKP for the past 12 years.

“Tucki has been a real staple of the YS Kids Playhouse,” said Fleming, “and our musical collaboration has been very rich for me. I was fortunate enough to get the funding this year to be able to combine these two wonderful, creative musicians.”

The creativity doesn’t stop there. Frankenstein the creature is a 10-foot-tall puppet designed by local painter Travis Hotaling and manipulated by a crew of four. To generate publicity, the creature attended the Yellow Springs Street Fair wearing a snappy summer hat, walking among the many booths, and mingling with the crowd.

Technical director and recent Antioch grad Megg Fleck designed the doctor’s mobile lab, which can be wheeled on and off the amphitheater stage. Fleck’s eyes lit up when she talked about her search through Mendelson’s Liquidation Center in Dayton for the gauges, dials, hoses, and cams that give the lab a distinctly creaky science fiction feel. A production designer for two of Fleming’s past productions, Fleck described the various components and what they used to be before her creativity got a hold of them.

“This is what the inside of my mind looks like,” she laughed.

For publicity materials, YSKP asked for drawings from Mills Lawn third graders. “We have 20 fabulous drawings and they all look like the movie Frankenstein,” Fleming said. “Although nobody has ever read the book and very few people have seen the movie, kids in third grade know what Frankenstein looks like.”