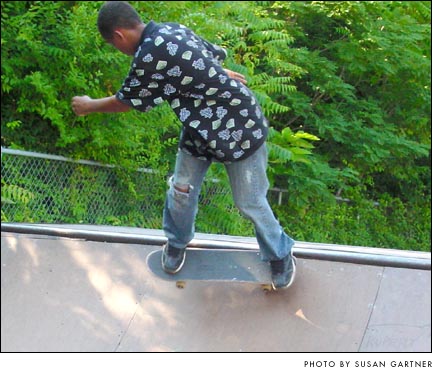 Anthony Colletti of Springfield was recently seen practicing his moves at the Yellow Springs Skate Park. A Skate-Music Fest will take place this Sunday, July 27, from 3 to 9 p.m. at the park to raise money. Six bands will play at the event.

Once viewed as a subculture of miscreants and thugs, skateboarding has come a long way. The proliferation of elaborately designed and well-used public skate parks, indoor and outdoor, nationally and internationally, has redeemed the skateboarder’s reputation and the sport overall. If you’ve been tuning out for fear of supporting an unsavory element of village life, you’ve missed the positive transformation that has occurred.

Skateboarding now has its own gear, Web sites, YouTube videos, teams, and world-class champions. The nonprofit organization and advocacy network, Skaters for Public Skateparks (http://www.skatepark.org) held its fifth annual summit this past May in Washington, D.C., where city officials, skatepark builders and enthusiasts gathered to discuss skatepark development and fundraising practices.

Skateboarders even have their own holiday — Skateboarding Day — which was celebrated on June 21 according to the Web site http://www.goskateboardingday.org. And to demonstrate just how far skateboarding has come, the current debate is whether or not it should be recognized as an official sport of the 2012 Olympics.

The biggest obstacle in the way of skateboarding’s complete redemption, however, may be the face that comes to mind when one imagines a typical skateboarder. It could be a scruffy teen but it could just as easily be a Huber Heights elementary school principal, married, with a 4-year-old son. Village resident Matt Housh can often be found at the Bryan Center skatepark, located behind the tennis courts in back of the Bryan Community Center.

“If you go out to any skatepark in the U.S. you’ll see anyone from age 12 up to 40 and 50,” said Housh, coordinator of the 2nd Annual Yellow Springs Skate-Music Fest. The fest will be held on Sunday, July 27, from 3 to 9 p.m., at the Bryan Center Skatepark and will feature skate demos, six bands (three teen bands), teen artwork, and Bentino’s pizza. Merchandise giveaways will be provided by local businesses. Skateboarders of all ages and skill levels are invited to skate throughout the evening. There is a suggested donation of $5 per person and proceeds will go towards skate park repairs and future skate music events.

“Some of the old timers like myself will still have the guts to go out there and get on the board,” said Housh. “It’s kind of a family feeling. If you’re a skateboarder you speak the same language and can communicate around that. Sometimes I’ll just hang out with [the other skateboarders] and they’re very welcoming and open even though I’m 20 years older than most of those kids. It just seems very natural.”

The idea for the Skate-Music Fest came out of a community forum that Housh and his wife, Deborah, attended last year when Carly Bailey and Niquelle Orr presented their Yellow Springs High School senior project focusing on how youth relate to adults and authority figures in the community.

“We thought if there’s this perceived gap between youth and adults, what you do is create really fun opportunities where kids and adults can come together,” said Deborah, who is program coordinator for the Yellow Springs Arts Council, a co-sponsor of the event along with the Yellow Springs Human Relations Commission and Yellow Springs Endowment for Education. The couple was pleased with last year’s fest, which attracted over 300 participants, but even more pleased with the feedback they received.

“We had teens coming up to us and saying, ‘We liked that but here’s the areas that need improvement. We’re all about that!” she laughed. “We absolutely invite teenagers to give suggestions, to get involved.”

The couple sees the annual fest as a learning opportunity for teens as they slowly take over planning responsibilities.

Band coordinator, sound technician, and YSHS senior Luke Eastman sees the fest as an opportunity to change negative perceptions about the park and the people who use it.

“A small portion of what actually happens at the skatepark is what gets publicized and talked about,” said Eastman, referring to the misconception that the park fosters criminal activity. “What is really happening is people skating and having a lot of fun and overcoming challenges. Skating is a lot about overcoming personal challenges for yourself.”

Villagers’ improved perceptions about the park could go a long way towards getting the park what it really needs: durable structures made of quality materials with regular maintenance.

“Every skater’s got a different dream of what they want in the Yellow Springs skatepark,” said Eastman, who was at the park almost every day last year. “Skating materials are expensive but with a small amount of maintenance, it could be improved by a lot.”

YSHS junior Nancy Epling believes that more kids would use the park if it were cleaned up and less trashed, she said.

While future skatepark improvements might include a major overhaul and new structures, Matt Housh is focused now on an immediate need.

“The ramps are deteriorating,” he said. “You can only patch them up so many times before the wood will just be rotten underneath. At some point the community is going to have to make a decision about what we want to do with that.”

For villagers who remain ambivalent about the park, Eastman extended an open invitation. “If people ever want to stop by and watch us skate they are welcome to. Doing things like the Skate-Music Fest is a good way to give people a better idea of what is happening and what kind of people are down there.”